March 1, 2003
You can't pick up a paper these days without having the headlines scream at you about the impending war with Iraq.I'm not sure how the rest of you feel but I for one am really struggling with this war... 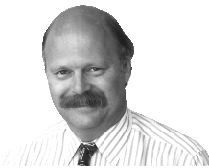 You can’t pick up a paper these days without having the headlines scream at you about the impending war with Iraq.

I’m not sure how the rest of you feel but I for one am really struggling with this war.

What concerns me even more is that I am forming my opinions about these issues on emotions, not on hard data.

The lack of hard data supporting the need to disarm Iraq seems to be in world-wide contention.

Does Saddam’s regime represent a clear threat to the security of the rest of the world?

Do they have weapons of mass destruction?

Most of the international community clearly feels these questions have yet to be answered and would like to give the weapons inspectors more time.

Our ally and neighbor, the U.S., or at least the Bush administration, does not need more proof, they appear set to move on Iraq.

I have never been a fan of conspiracy theories shared by those inflicted with the “they syndrome.” Yet in the case of this proposed war I find myself reluctantly impacted by the “they” camp.

One of the prerequisites in order for this to occur is a lack of useful and digestible data, coupled with the fact that for every piece of solid information another opposable piece appears.

This is to me the definition of misinformation.

Do they, the pro-war forces, want to, as stated, rid the world of a dangerous man and liberate the Iraqi people, put in a puppet government in order to control the oil fields, or make war because they can and it will either keep every one’s mind off – or better yet kickstart – the economy?

Do they, the anti-war forces, who feel that the weapons inspectors won’t come up with the hard data with which we can proceed, have their own selfish political agendas and rally around any cause that is anti-American, or do they really have concerns for the Iraqi people?

The pro- and anti-war forces are hardly unified, individuals and countries seem to vacillate between camps.

So far this has been a war of propaganda and I am having trouble discerning the truth.

I can’t help but believe that if the issue is to get rid of Saddam Hussein, (on this point there seems to be consensus) there must be easier and more direct ways, so I think there is more to it.

Personally I would like to see resolution of these issues through The United Nations, but what do I know? I’m just another guy with an uninformed opinion.

Maybe Bush and Saddam should duke it out on a soon to be announced reality television show.