VITTORIA, Ont. — Imagine getting paid to eat a nutritious, catered lunch after a personalized 30-minute workout by an accomplished trainer every workday.

The office staff at Scotlynn’s Vittoria facility don’t have to imagine. This is their reality. They get paid to eat healthy and work out every single day as part of their wellness program, which was rolled out 18 months ago.

Biddle said the idea came to him a few years ago when he found himself training for Cain’s Quest – a 3,100 kilometer snowmobile endurance race in Newfoundland. He hired a young trainer to meet him every morning at 6 a.m. before work to get prepared for the race.

“Right after I started training, I just realized how good I felt and how much better my days were, and how much more productive I was,” Biddle explained. “And I thought if I can take those benefits, the way I feel, and if everybody that worked for me felt as good as I did, you know, the things we could accomplish could be endless. So, I hired that trainer full-time and brought him into the office.”

The trainer, Wayne Barnett, sees groups of office staff throughout the day and personalizes their workouts according to their needs. Each of the 60 or so staff members enrolled in the program (Biddle says about 90% of the office staff participates in the program) get a 30-minute workout during the day. Workout plans depend on the person, but Wayne says he likes to combine cardio and strength training when he can.

“And when I first thought of introducing the program, I thought I’ve got to pay them to do it,” Biddle said. “They’ve got to do it during their workday. Because people aren’t going to come in before or come in after – everybody’s always got an excuse why they’re not going to go to the gym.”

So, staff members work out during work hours, and literally get paid to do so.

To complement and round out the fitness program, Biddle also hired a trained chef to join the company to prepare staff nutritious lunches and snacks every day, free of charge.
The chef, Andy Murdoch, worked locally in Port Dover, Ont. for a while before Biddle picked him to join the company. Every day he creates a morning snack at 10 a.m., which consists of things like fresh fruit, yogurt, and granola, a lunch, like grilled chicken and salad, served at noon, and an afternoon snack at 2 p.m., consisting of fresh vegetables and hummus.

Biddle said he hired a chef due to the company’s demographic and its remote location.

“The people we hired were generally younger people in the logistics business,” he explained. “They don’t think about what they are going to eat the night before. Like me, they think about what they’re going to eat 15 minutes before they need to eat. So, they’re wasting 15 to 30 minutes before they eat, then they drive and get the food…that’s usually garbage food, that they pick up and bring back to eat at their desk. Then at 2 o’clock they’re laying on their desk because it’s garbage food. So, I found it very beneficial just to implement the healthy food. Plus, we’re a 10- to 15-minute drive away from any fast food places. Hiring a chef just felt like the right thing to do.”

Murdoch works hard to ensure that he doesn’t repeat too many meals and injects a lot of color into the staff’s diet. 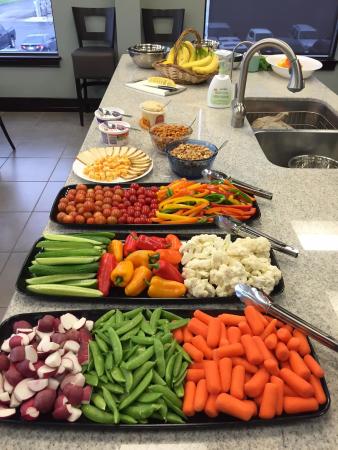 “We always like to switch the meals up and use a lot of local farmers and butchers for our meat and eggs,” he said. “We like to stay with local vendors and buy fresh fruits and vegetables that are in season. So right now, we’re eating a lot of asparagus and corn.”

“When we first started the program, we ran out of chicken,” he said. “And I had it all portioned out per person, four ounces. So, after that, I figured that I was going to have to teach portion control. So now we do an example plate each day of what your portion should look like.”

A fan favorite of the office is Taco Tuesday. And though it seems like a high-calorie lunch option, Murdoch says he makes it nutritious by offering healthy alternative to put in the tacos like lean ground beef, black beans, avocado, and tons of fresh vegetables.

“It’s definitely a crowd pleaser,” Murdoch said. “Plus, people save money every week on groceries, which I’m sure they appreciate. I know packing a lunch at home isn’t something most people look forward to. So, with this program, it makes it easier for staff to focus on other things.”

The benefits Biddle has seen are endless, he said. Staff are looking and feeling better and he has seen it boost production for the 250-truck operation.

“The culture within the office, the realm, everything is just better,” he said. “People feel a lot better. We strive to be the best in the industry and every day we look at ways to improve morale in the company and this has definitely helped.”

Success stories aren’t hard to come by in the office, as many have lost a significant amount of weight and have reached their fitness goals.

One example is the company’s chief financial officer, who suffered a heart attack a few years back. Through the program, he dropped close to 40 pounds. Now, according to Biddle, his CFO runs at least two miles every morning. Another staff member weighed 165 lbs and wanted to bulk up and gain more muscle. He’s now up to 190 lbs thanks to the program. Another staff member, in the payroll department and in her 60s, went from deadlifting 45 lbs in the gym to deadlifting 150 lbs.

“On the whole, everyone who participates in the program is doing amazing,” Biddle said. “We sit at our desks all day, so to get up and get moving and eat something healthy every day is a good thing.”