YELLOWKNIFE, N.W.T. — Driving the ice roads in Canada’s north is on several drivers’ bucket list – it’s even a popular (and dramatic) TV show.

Despite the drama we see on television, building an ice road is a serious matter, one where safety is a top priority. 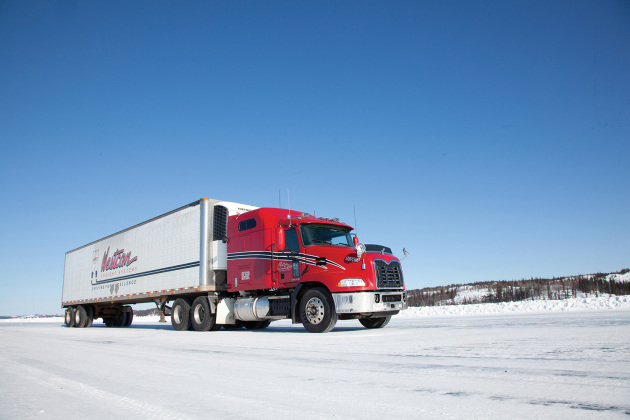 RTL Robinson Enterprises, a division of RTL-Westcan Group of Companies, has been making ice roads to service northern mining operations for decades.

Starting with gold mines, Larry Wheaton, vice-president of operations for RTL at its Yellowknife location, said the road now provides access to the diamond mines, which were discovered in the mid-‘80s.

“It was very fortunate for the north, when the gold died off and the diamonds, which nobody even knew were here, took off and went gangbusters, and it morphed into the big thing we have today,” said Wheaton. “We do anywhere from 10-12,000 loads in a season.”

Those loads travel on what is known as the Joint Venture, or JV Road – a 450 km stretch of highway that is open from around Jan. 29 to the end of March.

Wheaton and his team took a helicopter out Dec. 6 to check the thickness of the ice.

“Based on that, it will tell us when we think we can get out onto the ice,” said Wheaton. “If we get out there and find we have 11, 12, or 13 inches, we’re pretty comfortable to start off with light equipment. If you’ve only got five or six inches, then we’re waiting for Mother Nature to catch up to us.”

During the past decade, Wheaton said his team has removed the snow from where the road runs on the freezing lakes sooner to help advance the process of ice growth.

“Some can say that’s global warming, some can say we haven’t broke any highs or lows,” he said, “but because it’s a necessity to get the ice growth to get the volume of loads up the roads, we need to expose the ice sooner.”

The plan this season, depending on ice thickness, was to set up camps on Dec. 15 and get the crew removing more snow from the ice road with light equipment. They then flood the ice to sustain ice growth. Once the thickness reaches 18 to 20 inches, heavy equipment is permitted on the road and construction of the portages begins.

With the use of GPS technology, the road is placed in the same location every year. In the past, the crew relied more on maps, memory, and traditional knowledge.

Portages, which make up about 15% of the ice road, are in designated spots where RTL has been issued land use permits to facilitate travel between the lakes. They are required to put a minimum of four inches of ice over the land for the portages to ensure the road is smooth and to protect the underlying land.

Much the same as any road, the finishing touches of the ice road is done with graders.

“You want to get the road so that the trucks can safely and without hurting themselves travel 30 km/h fully loaded,” said Wheaton.

Unlike back in the 1980s, when ice road trucks were built specifically for those harsh conditions, Wheaton said the trucks that travel on the road today are regular highway models.

“The same trucks you see running between Edmonton and Calgary is the same equipment that is running up the ice road,” he said.

Because there is such a short window when the ice roads can be used, it made more economical sense to use standard highway trucks, and the ice road had to change to accommodate.

“Nobody wants to come up here and work for six to eight weeks and have their equipment broken or cracked,” said Wheaton. “So more money was invested into the road, which makes it more valuable for the trucking side.”

Donald Chisholm has been driving the JV Road for seven years and admitted he had to shake off some nerves the first time he rolled onto the frozen lake.

“The whole safety aspect of hauling 63,000 kg over water on a temporary road had me questioning doing it,” said Chisholm. “After three or four runs, I was comfortable. Safety was top notch with three-and-a-half to four feet of ice on the road, which is measured daily.”

Fatigue is one of the biggest challenges Chisholm said drivers have to face when traveling an ice road, with the long distances they have to cover at slow speeds.

“It’s important to maximize your rest,” said Chisholm. “Don’t get caught up with sitting around the camp table talking. Also, trying to run at regular times throughout the whole season helps with routine and combating fatigue.”

Another driver, Travis Smees, agrees that battling fatigue is a challenge. In his fourth season driving the ice roads for Westcan, Smees said he had lofty expectations when he first headed up north.

“I was never really concerned about falling through the ice, as it has never happened to any major effect on this road to the diamond mines,” said Smees. “After the first couple of trips, it actually gets quite boring, monotonous even.”

Smees did say there are some spectacular sights traveling the ice road, like the Northern Lights, herds of caribou, lynx, and even wolverines.

Having a positive attitude is something Smees would advise of any driver looking to drive a season on the ice road.

And be willing to learn.

“Take the advice on the road from the veterans who have been driving the road for years,” he said. “I learned my first year from some of the guys who have been at it for a while and they know all the tricks of the trade to make the season up north go along with few hitches.”

A fully-loaded tractor-trailer can travel a maximum of 30 km/h on the ice road, while empty trucks can up their speed to around 60-70 km/h.

RTL provides a crew that operates 24/7 security and maintenance for the road to ensure its safety.

“The trucks beat the hell out of the road,” said Wheaton. “When you have traffic – running 175 to 200 trucks per day, loaded, one way – the road takes a beating, so you’re constantly maintaining it.”

One issue Wheaton has seen since 2008 is frigid temperatures crippling regenerated trucks.

“All these Tier 4 engines that we have to run in these cold temperatures really struggle,” he said. “You have guys running around with laptops trying to keep these things running because they have sensors that are out. You’re not physically breaking the truck; 80% of it is tied to re-gen issues.”

Wheaton said temperatures between -20 and -30 Celsius are ideal, but when they drop to -40 Celsius, much of today’s equipment struggles.

Wheaton said there are drivers who have a true passion for working the ice roads and return each year looking forward to the new season.

“Then we have the bucket list guys,” he said. “They show up because they watched it on TV and want to do that and put their mark that they’ve done it. Most of them leave here pretty disappointed…it’s not what they expected.”