PENTICTON, B.C. — Family businesses are special for a reason. There is a special connection one has to a company when it is part of their family, and a desire to carry on that family legacy becomes ingrained.

At Berry and Smith Trucking, the third generation is just now starting to step into their roles at the family business, something Matt Berry believes is an important step in the company’s progression. 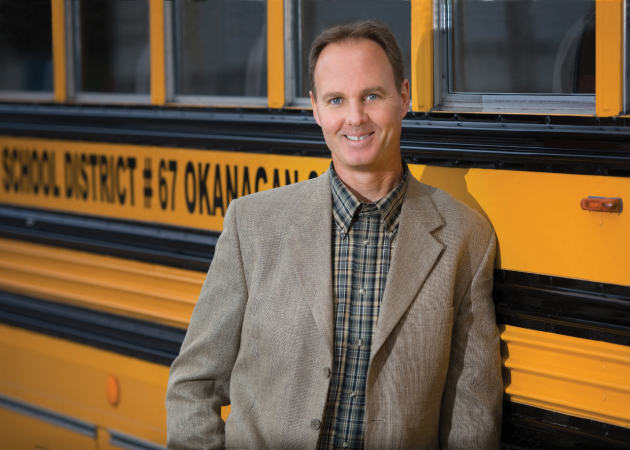 “The third generation allows continuity for customers and staff knowing that Berry and Smith Trucking will be carrying on looking after our customers,” Berry said, admitting that over the next decade, the company will face the challenge of having to hire a lot of new staff with many current employees eyeing retirement.

“There is a lot of expertise and knowledge that we have to train new people on,” said Berry, “so this will also be a focus for us to start this process early and commit the resources needed to ensure it takes place.”

Navigating his role as company president, Berry joined Berry and Smith Trucking in 1985, 12 years after his older brother, Mark, both looking to carry on the legacy of their father, Stu, who launched the business in 1954 with Ted Smith.

“It was hard, physical work with a lot of hand loading and unloading,” said Matt. “The days were spent using the equipment and the evenings spent doing repairs, all while both men were raising young families. This work ethic afforded them a reputation of being hard working guys who gave good service and a big effort, so business continued to come in and the company was able to expand.”

After purchasing larger trucks and getting into tractor-trailers, Smith sold his share of the company to Stu in 1970 and became a fireman. Maintaining their friendship and admiration for each other, this theme of respect trickles down to how Berry and Smith Trucking deals with its customer base.

“The company has always maintained a customer-first focus,” said Matt, “making sure the staff who were hired were customer focused, had the right attitude and work ethic, and if they were not already a good driver, could be trained to become one.”

Today, Berry and Smith Trucking hauls general freight pretty much anywhere in Canada and the U.S. with a focus on the Pacific Northwest. They operate a combination of 53-foot vans and flat deck equipment, transporting a variety of products, such as tubs and showers, insulation, wood beams, wine-related products, equipment, and anything else they can move safely.

Being a company that moves freight cross-border, Matt said when it comes to regulations, one thing must be kept in mind – they are there to enhance safety and security.

“If we can get our heads around why these processes are in place then it helps how we will view and respond to what is being asked,” he said.
Matt said taking steps prior to a load crossing the border can help things move more smoothly, such as pre-notifying border agents and taking advantage of programs like Customs-Trade Partnership Against Terrorism (C-TPAT) and Partners in Protection (PIP).

But there are some areas he would like to see improvement.

“The escalating fines and penalties through the Administrative Monetary Penalty System (AMPS) is a system that needs refinement,” Matt said. “There needs to be recognition for a carrier’s frequency of loads crossing the border and compliance ratio targets that are acceptable.”

Matt also says there are unfair cabotage rules in Canada, where Canadian operators are not permitted to transport freight on a point-to-point basis with the U.S., yet the rules are not the same for foreign carriers operating in Canada.

“It’s important to have a system that is fair to all parties and not offer a competitive advantage to non-Canadian operators,” Matt said.

As for the ever-contentious issue of mandatory electronic logging devices (ELDs), Matt is a true believer in their value to bring better safety and a leveler playing field to the industry.

“The hours-of-service that are in effect are there for good reason and it’s up to all of us to work within the legal hours-of-service allowable for Canada and the U.S.,” Matt said, adding that the responsibility lies with all involved in the transportation process. “There is something wrong with the system we have created if we have expectations of drivers working beyond legal hours of service. Part of the carrier’s job is to help shippers plan a viable shipping schedule and to help educate them on the rules that industry must comply with and be proactive in making suggestions on improvements that could be made that ultimately would benefit them.”

With the government’s carbon tax policy, Matt would like to see trucking companies that employ the use of green technologies eligible for tax rebates to help offset an ever-growing expense.

“New equipment is extremely expensive and has far outpaced inflation rates,” he said, “so incentives in this regard would be a very real way of putting a portion of the carbon tax collected toward carriers and operators doing the right thing.”

It’s clear that Matt’s knowledge and passion for the industry is rooted deeply within the family business his father created 63 years ago.

And with his nephew, Kaolin Mallette, a red seal commercial transport mechanic and lead hand in Berry and Smith Trucking’s shop, and his son, Parker, a recent business degree graduate with a Class 1 license and now learning dispatch within the various operations in the company, it looks like that knowledge and passion will endure for generations to come.