BLAINVILLE, Que. — Left unfettered to do its job, science will perform amazing feats, and this is just what the researchers at Performance Innovation Transport (PIT) Group, with the enthusiastic support of its member fleets, trucking schools and government agencies, have done.

In 2008, FPInnovations, an independent Canadian forestry research institute, founded PIT Group, with the mandate to test technologies and techniques with the claim or the potential to reduce fuel consumption. (The year before that was the genesis of PIT, with track trials, dubbed Energotest, of some aerodynamic accessories conducted at the request of Groupe Robert and Cascades, with the wise proviso by Transport Canada that FPInnovations, with decades of expertise in testing technologies, design and run the trials). 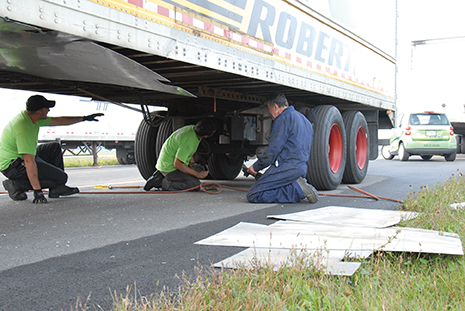 Since then, PIT has carried out 301 tests during a score or so of spring and fall Energotest fuel consumption trials, totaling around 150 track days on Transport Canada’s test track in Blainville, Que. The technologies tested range from aerodynamic add-ons, air intake, engine and fuel additives, and lots and lots of tires. Techniques tested include stop-and-go urban duty cycles, fuel consumption tests, fuel consumption at different speeds, disconnecting the second drive axle, and platooning, where three rigs travel in tight formation.

What is common to all of these tests that makes PIT so important to the trucking industry? Well, at a gathering this October in Montreal to pay tribute to PIT’s 10 years of action, an FPInnovation staffer asked me, “What, to you, is the most important thing about PIT?” My instant answer, one I have sworn by since the day I heard about that first upcoming Energotest in 2007, was, “It’s the science!”

Before PIT, there were fleets that valiantly tried to measure what methods and products could save fuel. People expert at their day jobs created tests, of a sort, but they were out of their depth playing backyard scientist; the flaws in their home-baked methodology were usually large enough to drive a tandem rig through.

In the words of PIT researcher Marius Surcel, “We have the most rigorous procedure for conducting the testing exactly according to the procedures.”

The result is that PIT has become a destination for vendors with promises for sale, and a trusted source of information about what works and what does not, from PIT’s storehouse of research results.

As Christopher Trajkovski, the vice-president of maintenance with Bison Transport, told the masses at PIT’s fifth anniversary party, “Having PIT do the testing frees us up to stick to our core competence, to make prudent capital decisions.”

“The trials give industry-wide validity to the tests,” added Andrew Smith, the CEO of Advanced Transit Dynamics in Solana Beach, Cali.

Membership fees fund the PIT research. In return, members have exclusive access to its research results. Members also propose ideas for PIT’s testing programs – a wellspring that shows no sign of running dry, according to Marc Trudeau, industrial consultant/researcher, PIT.

“Every year we think that we will run out of ideas. We look at the past and we think that it will be difficult to do better. Sure enough, our members are coming up with a ton of new ideas every year. We have over 100 proposals (a year) on average.”

PIT has been expanding into the U.S. Activities include tests at US Express, and the launch of PIT Crew USA, which is a program for American fleets that want, for example, access to PIT testing expertise and data.

What does the future hold for PIT? A lot, it would seem.