The story so far

Mark gets a call asking if he’s willing to bail Bud out of jail. He agrees to do it for a few days, because on the 10th, Bud’s brother will be back in town and will take over from Mark as Mark has a sweet load to California beginning on that day… 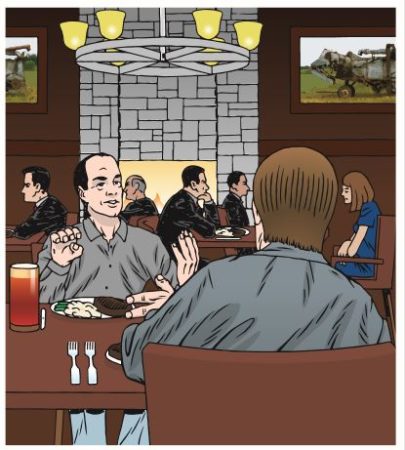 Bud and Mark climbed up into Mother Load and drove north to a Keg restaurant where they could sit down in a quiet space and talk without raising their voices and anybody overhearing. After they both ordered a draught and a couple of steak dinners, Mark asked the question that had been on his mind for several hours now.

Bud’s lips curled upward in an awkward smile, he nodded his head a couple of times and then began to speak.

“I met her a couple of months ago,” Bud said, a bit of a twinkle in his eye. “She was fun, funny, sexy as all hell, and she seemed to be able to let me be myself…warts and all.”

“You mean you have faults?” Mark asked.

Bud didn’t crack a smile. “This is serious, so I’d appreciate it…”

“We went out a couple of times over the course of a month and slowly the time in between seeing each other got shorter and shorter until we were seeing each other every night. And it was great. I really looked forward to seeing her and when I went home for the night, I wished it was already tomorrow.”

“Such a romantic,” Mark said. He’d promised not to make any more jokes, but this was such a slight tease Bud didn’t even realize Mark had been teasing him.

“It was. That was it exactly. Romantic.” Bud seemed to get excited and Mark marveled at a side of Bud he never knew existed.

“But slowly things started to change. It was such a slow transformation I didn’t even know it was happening until things had gotten bad.”

“I don’t know why, but she started getting weird on me. If I was too long getting to her place, she’d ask me where I’d been. When I didn’t have a good enough explanation, it would put her in a foul mood the whole night.” Bud stopped to take a breath. “Then she started checking my phone.”

“How can I give permission if I’m never asked. If I left it laying around, she would casually pick it up and start scrolling through my calls.”

Mark had a good idea what was coming next.

“‘Who’s this?’ she would ask, and ‘Who’s that?’ Half the time I couldn’t remember, I make so many phone calls in a day. Well, let me tell you, ‘I don’t know’ is not a good answer in that situation. She began accusing me of cheating on her.”

“It is a little far-fetched,” Mark interjected.

“And you want to know the worst thing about it was?” Bud paused, but Mark knew he didn’t have to urge Bud on. He was on a roll. “I have a lot of women drivers working for me. Not only that, but a bunch of the men driving for me have names that could be the names of women. You know, Lorrie, Sam, Carol, Erin, Stacy. Every time she saw one of those names it was, ‘Who is this?’”

“Sounds like it could only get worse,” Mark said.

“And it did. Last night. We had a bit to drink – me a couple of beers, her a few glasses of wine – and she eventually got around to picking up my phone again. Didn’t take long until she started up with the questions. When she came to someone named Sherry, I had no clue who that was. I still don’t. And when I told her I didn’t know, she just kept pressing. I kept saying I don’t know and she just started in about how I was cheating on her with someone named Sherry, which of course, I wasn’t. The best I could do was tell her Sherry was some trucker I knew, but she wasn’t having any of it.”

Bud took a deep breath, then said, “Finally, I’d had enough of all this and I told her to get over it and relax, that it was no big deal. Well, that was it for her too. She lost it then, coming right out and accusing me of having more than one woman on the side.”

Mark couldn’t resist. “Well, do you?”

Bud was incredulous. “No, for Pete’s sake. I don’t. I’ve had enough trouble with one woman. Can you imagine how a guy my age is supposed to juggle two or three at once?  Well, I didn’t want to argue the point any more so I just told her, no I didn’t have any other women, but she just wasn’t listening to me anymore. She kept scrolling through my phone yelling out women’s names whenever they popped up onto the screen.”

Mark remained stone-faced, but inside he was laughing a bit at the picture his mind created of the scene.

“Finally, I went to grab the phone from her – my phone, mind you, which I never gave her permission to look at in the first place – and she pulled away from me, not letting me have my phone back.”

Bud lowered his head before he said another word, as if he might be ashamed at what came next.

“So, I grabbed her and forced the phone out of her hand. Well, that just confirmed everything she was accusing me of was true. And, I’d put my hand on her.” A shrug. “So, she called the cops, showed the bruise on her arm where I’d grabbed her, and I was taken away, spent a night at the police station and now here I am.”

“They tell me I can’t let you speak to her,” Mark said.

Bud laughed. “You won’t have to worry about that. As if I would ever want to even see her again.”

Their meal arrived and they enjoyed each other’s company, catching up on what seemed like years of lost time. While they waited for dessert, Mark informed Bud that he was only going to be acting as his surety for three days. On the third day, the 10th, they would be meeting up with Bud’s brother at the courthouse and they would switch over so that Bud’s brother would become surety until the matter ran its way through the court system.

“They told me that was the plan,” Bud said. “I appreciate your help. Thanks.”

Together, they finished their meal and Mark made sure that Bud grabbed the check. “Least I can do,” Bud said.

“Now,” Mark said. “I’ve got a load to pick up headed for Montreal.