October 1, 2009
GUELPH, Ont. - This summer's most sizzling acquisition announcement -the purchase of the St. Thomas, Ont.-based Walker Group of companies by MacKinnon Transport -is getting two thumbs up from industry... 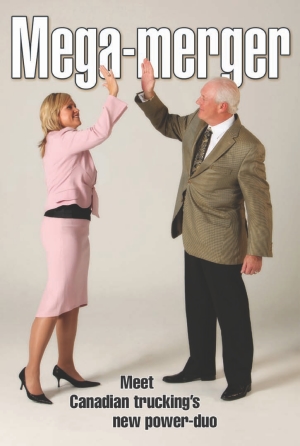 GUELPH, Ont. –This summer’s most sizzling acquisition announcement -the purchase of the St. Thomas, Ont.-based Walker Group of companies by MacKinnon Transport -is getting two thumbs up from industry analysts who believe it to be the start of further consolidation in Canada’s beleaguered truckload sector.

The deal, announced at the end of August, creates a combined entity that will operate out of MacKinnon’s head office in Guelph where the company will now manage over 1,300 pieces of equipment and employ a workforce of 420 people.

The Walker Group consisted of LE Walker Transport and Mid America Freight Systems, both major players in the dry van and flatbed marketplaces in North America.

The Walker Group was led by the highly visible Julie Tanguay, current chair of the Ontario Trucking Association. Tanguay will now have joint ownership in the combined entity and will take on the newly-created role of executive vice-president sales, heading up sales efforts for the combined fleet.

“I think this is a very interesting play for MacKinnon and Walker. I think it’s the right move and I expect more consolidation in the TL sector,” said Elian Terner, a director of investment banking with Scotia Capital.

This also represents a different type of deal than what the industry has seen in the recent past. A lot of the mergers and acquisitions the market had seen prior to the recession involved moves into new market segments for the carriers involved. Over the past year, with access to credit tightening significantly, the activity had focused instead on small opportunistic “tuck-in” type deals.

“This one is really more of a consolidation play in a weaker segment of the industry. The TL sector has taken a big beating and I’ve got to think TL owners are thinking that to be ready for another business cycle they’re going to have to pair up with someone. But in terms of attractiveness of TL, it’s not really attractive to any other type of carrier. If a guy is asset light, he’s not interested in TL; if he’s specialized, he’s not interested in TL,” Terner said. “The TL guys are going to have to solve it on their own and I think MacKinnon and Walker are doing the right thing in being a first mover here.”

Well-known industry consultant Dan Goodwill, a former trucking company executive himself, also praised the deal as a good move with a real chance for success.

“Everything that I read and hear is that the economic rebound is going to take three to four years to get back to where things were. It’s supposed to be a long and bumpy road and slow building up one’s business,” Goodwill said. “If MacKinnon and Walker can retain the revenue, right size the business, drive some synergies, and the financials of the deal are solid, this would be a good move.”

Tanguay and Evan MacKinnon, who continues as president and CEO of MacKinnon Transport, believe the acquisition provides the new entity with several advantages as it continues to deal with the current downturn and the eventual economic recovery as well as new benefits for shippers.

Both carriers are involved in transborder hauls. But Walker’s strength was greater in southbound freight hauls to the US while MacKinnon was stronger in their northbound runs into Canada.

“We are both irregular route TL carriers. We get in places where we are not there every day. And so we rely on freight brokers quite often to reposition our trucks. When we start mixing their customers with ours there will be less reliance on freight broker freight going forward and we will be able to close up some empty miles. Even 1% fewer empty miles is three quarters of a million dollars to us,” MacKinnon told Truck News.

Walker’s St. Thomas terminal will continue to operate in the short-term but eventually (likely by year end) will be merged into MacKinnon’s Guelph operation. All drivers and owner/operators have been retained but there will be some savings realized in combining support staff.

Tanguay says bringing together MacKinnon and Walker strategically positions the beefed up new entity in a way that will help it respond rapidly to changing markets and customer requirements. And she adds the customer bases of the two companies were quite diversified with very little duplication of accounts (5% or less).

Terner concurs: “The TL guys service the big box guys and the big box guys are elephants and they like to dance with elephants. The more scale and concentration you can present the better positioned you will be for the upswing,” Terner commented.

MacKinnon sees plenty of opportunity for growth within existing Walker and MacKinnon accounts, which are operating at about 60% of normal freight volumes today after two years of freight declines. In addition to better geographic coverage and more capacity, Walker clients will also benefit from access to MacKinnon’s warehousing offerings.

But MacKinnon believes the greatest benefit to customers stemming from the transaction will be the ability to grow in a financially sound manner.

“There are more and more customers concerned these days if a company has a financial problem: where is their freight going to be when that happens? As far as a customer looking to develop a relationship for the long-term, this is going to make us very financially strong,” MacKinnon said.

“When the opportunity for growth comes, now that we’ve combined the two companies and with the level of profitability we’re going to achieve, it means we will not be eating up equity to sustain the business, which is what most trucking companies are doing these days.”

Tanguay and MacKinnon have known each other for over a decade, working together on the OTA and as partners in the Fleet Resolutions insurance captive both of their fleets belonged to. The relationship forged during those years allowed for the deal to happen quickly once interest on both sides was confirmed. MacKinnon added that although the freight recession has left many trucking companies available for sale, Walker was not actually one of them.

“They weren’t for sale. We started talking to them about opportunities. What probably initiated it was the mutual respect Julie and I had for each other and it evolved into something more than an acquisition because Julie now also has ownership in MacKinnon Transport,” he said. “There are lots of opportunities out there but there are not always owners and CEOs who can work together in a partnership. That really helped when the two of us were putting this together. Both of us shared common values and ethics and that’s another thing that was really key to us. It’s going to make a huge difference when we start merging everything under one facility, the fact that we have similar cultures in our two businesses because trying to change cultures is very difficult.”

Both companies are also family-run businesses, which MacKinnon believes also paves the way for compatibility.

MacKinnon credits his company’s long-standing relationship with Bank of Montreal (BMO) for helping to make the acquisition possible. He adds that his company’s focus over the past year to improve its profitability was key to being able to negotiate the deal with BMO.

“We came out of special loans, where pretty near every trucker is, a few months ago based on our results. We proved to them that we do what we say we are going to do. And we turned over just about every rock we could to put this together on an ongoing basis, figuring out where we want to be six months from now, a year from now, 18 months from now,” MacKinnon explained. “This whole thing was put together in about 10 weeks, which
to do that in today’s banking environment is pretty amazing.”

Is the fact that BMO was willing to participate in the MacKinnon-Walker deal indicative of a financial market finally loosening up?

“In terms of the banks we have seen them now be fairly open visa-vis refinancings. In terms of new financings it certainly was tight end of last year and start of this year but we are starting to see discussions around acquisition financing,” Terner says. But although he expects to see more merger and acquisition activity in the months to come, he cautions that such activity is not only driven by credit financing but also by confidence.

“You need to have CEOs and business owners confident about what they see over the next 12 months. To the extent they are confident they will be interested in looking at transactions and that confidence will also flow to their bankers. The two go hand in hand,” Terner said.

‘This whole thing was put together in about 10 weeks.’