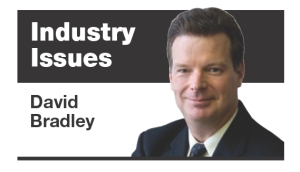 ‘Life in the fast lane, surely make you lose your mind.’

When the Eagles penned that line back in the seventies they could not have known that it would one day describe the situation at the Canada-US border.

Just when you wouldn’t be blamed for hoping that things might settle down at the border, the US Customs and Border Protection Agency (CBP) of the Department of Homeland Security and the US Department of Agriculture (USDA) recently unveiled two new measures each of which increases the risk of a further thickening of the border and impairment of the efficient flow of land trade between the world’s two largest trading partners.

One of the new measures has to do with the treatment of residual products in containers entering the US.

The other is a requirement to provide genus and species for all wood and plant products entering the US.

Since 1994, residual chemicals in an empty container have been treated by CBP as Instruments of International Traffic (IIT) which only require a manifest for entry into the US.

The manifest typically includes the origin/destination, truck, trailer and driver information, date, port of entry, signature of driver, and may also state “IIT” on it.

With the introduction of ACE e- Manifest, trucks arriving with IIT’s may present a paper manifest. There is no requirement for an e-manifest for shipments consisting solely of IIT’s. However, on Aug. 6, 2008, CBP issued a notice that it intends to require that chemical residue within containers crossing into the US be classified, entered and manifested. In other words, it would be treated as a commodity thereby requiring a Customs entry with all the associated data collection such as quantity, value, shipper, consignee, etc. as well as a complete e-manifest.

Moreover, there is conflicting information from CBP as to whether the new entry requirements will be limited to chemical residue or whether it will be much broader in scope and include all liquids including water, spirits, beer, etc.

It appears that the purpose of this initiative is to protect the health and safety of CBP officers who may be called upon to inspect the containers. Certainly, CTA does not dispute that this is an extremely important issue to be concerned about. Officers should not be placed at risk by opening or inspecting a container that contains a substance dangerous to human health.

However, is adding the new requirements really going to make the CBP officers’ jobs any safer? Are there other ways this could be achieved? For example, it is possible under current practice to note the presence and type of residue in a container on the manifest so that CBP has the information it needs to safeguard its employees. Would this not suffice?

Requiring a Customs entry for every residual product being transported into the US poses no end of potential problems: 1) Difficulties measuring what may be in many cases trace amounts of residue; 2) The health and safety risk to truck drivers from having to measure residue left in a container; 3) Additional costs associated with bringing a Customs broker into the transaction, discrepancy reports and operational impacts; all of which 4) Detract from the benefits of the FAST program.

But that’s not all. With passage of the Farm Bill, the USDA has initiated a requirement which comes into force on Dec. 15, 2008, that Customs brokers and importers must provide genus and species information for all products that contain wood and plant products.

The requirement was tacked on as a last-minute “rider” to the Farm Bill. It is hard to imagine that the legislators understood the scope of what they are imposing on cross-border trade.

Literally hundreds of thousands of products will be impacted. Eighty of 97 Harmonized Tariff Schedule (HTS) chapters are affected. Obtaining, let alone ensuring the accuracy of genus and species data for many products will prove extremely difficult, if not impossible. (For instance, take the example of paper used to wrap batteries in a video camera).

Moreover, it would be required that Customs brokers would have to submit the declaration as an original paper document. Not only does this run counter to efforts to date to move towards a paperless and electronic border, it adds one more step in the border crossing process -manifest, broker’s entry and the new declaration.

While electronic processes are being investigated, systems were not initially designed to meet this requirement. Any delays in obtaining this data will prevent the efficient flow of legitimate trade across the border.

As this matter would be treated as an admissibility requirement, CBP would not grant Customs release until the electronic broker entry, the e-manifest and the paper declaration all matched.

CTA is doing what it can to try and bring some common sense to the border, but it is a constant struggle given what seems to be a never-ending parade of complicated new measures. •

-David Bradley Is President Of The OTA And CEO Of The Canadian Trucking Alliance.