“Try it and you’ll like it” has been a common theme in the trucking industry of late with new advancements being made in the world of technology.

Automated transmissions are no different, and with approximately 70% of new trucks coming with the newer, easier to operate clutch, what kind of impact does this demand have on the used truck market?

A lot depends on what year the truck was manufactured. As Jason Wheeler, vice-president of Canadian operations for Inland Kenworth in Burnaby, B.C., explained, automated transmissions in the used truck market are gaining in popularity. 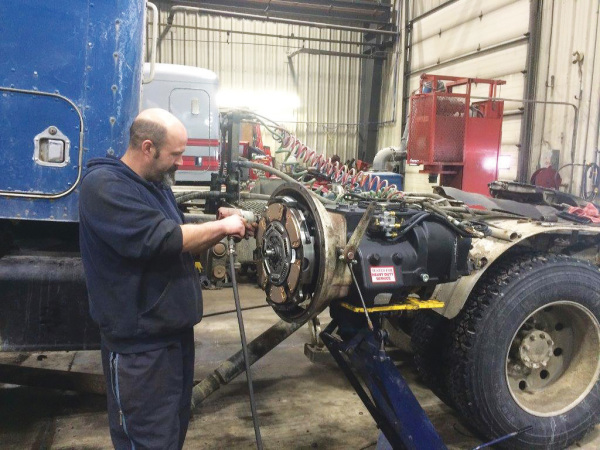 “I would say it is almost the same depending on the model year,” Wheeler said comparing the demand for automated transmissions in the new and used markets.

“Older trucks with automated transmissions are less desirable than manuals, however, the later model trucks are performing well.”

One of the concerns Wheeler has heard from used truck buyers is the cost to repair an automated transmission, something he said is higher than with manuals.

“When it comes to the Eaton, for example, it is the same transmission with an ECU controlling the shifts, so the base box and gears are the same and have the same repair costs,” said Wheeler. “But then you add in the extra shifting components.”

Wheeler added that some proprietary transmissions can be difficult and expensive to rebuild and are only offered as exchange units.

He added, however, that reliability is improving on newer models, so repair costs are coming down.

Brian Sarna, corporate remarketing manager for Peterbilt Manitoba in Winnipeg, Man., agreed that the cost to repair today’s automated transmissions is much higher than manuals, but he added they also work much better and for longer.

“They are becoming very bulletproof,” said Sarna. “Call it smart, but it doesn’t have to sit there and go through 10 or 13 individual gears. It’s smart enough to know, it senses the load and might start off in third gear instead of first, then might jump to sixth. It’s smart enough to know what gears it has to take. The shifting is very smooth these days, you can hardly feel them moving at all.”

Sarna said around 45% of used truck customers are looking for automated transmissions. The difference Sarna sees in the secondary market is that these buyers aren’t always as up to date on new tech- nologies as those buying new trucks.

“A lot of the new truck buyers are fleets and have multiple units, so they are really in tune with the new developments in terms of new technology,” said Sarna, adding that the second owner of a truck may not be looking for the same level of technology. “He still comes from a little bit further back where you can’t beat the old stickshift. Primarily the second truck buyer is a vocational guy, maybe a regional carrier. He reads about (new technologies) but he’s still a little bit scared to jump in the water.”

Downton added there is a demand for Allison’s fully automatic transmission with RDS/PTO provision in the medium-duty market. With Class 8, he is seeing a demand from the farm community for 13- and 18-speed Eaton UltraShifts for grain and day cab trucks.

Some of the demand, Downton points out, is due to “a lack of driving skill for 18-speed manuals. We have had occasions when we have had customer waiting lists for automated manual transmissions,” Downton said.

Doug Brandon, sales manager for Timmins and New Liskeard Kenworth, said older auto-shift transmissions are not as popular as those found in today’s trucks, but he has seen a small demand for the Allison automatic transmission in some applications.

“New automated transmissions are becoming more popular,” said Brandon, “but are just starting to hit the used market. Some customers want them, others don’t.”

There is one application Koziak is seeing demand for automated transmissions on the rise.

“So far, the vast majority of customers looking for automatics are farmers,” he said.

Koziak said with costs to repair automated transmissions coming down and performance continuing to get better, the market needs to catch up to the technology and “get smart in the next three to five years.”

Wheeler said demand depends greatly on the application – highway being very unlike dump and dump a different animal than logging – with vocational customers not yet embracing automated transmissions due to “the less-than-perfect performance in those applications.”

Highway is another story, however.

“I don’t think the availability of automated transmissions is hurting the highway used truck market or the local city tractor market,” Wheeler said. “I know if I was grinding around town hauling trailers I would much rather have an automated transmission. And once guys try them they tend not to go back to manuals.”

As for performance, Wheeler said with today’s automated offerings, there is no comparison.

“The modern transmissions just do everything so much better,” he said, “but drivers still need to be trained on and embrace the new style of driving for them to perform at their best.”

Sarna added that though there was skepticism with automated transmissions at first, there is not much that goes wrong with the more recent models.

But for the used truck buyer, having an automated transmission is not always at the top of their priority list.

“When they’re coming to buy, they look at the overall truck,” said Sarna. “They’re not saying they will pay a certain amount more or 3% more because it’s automated. They buy it or they won’t.”