BLAINVILLE, Que. — It was an unusual sight: three tractor-trailers zooming around Transport Canada’s test track in Blainville, Que., separated by as little as 17 meters, or 56 feet. The purpose? To gather evidence on possible fuel savings associated with what race car fans would identify with as a drafting, or slipstreaming technique, and what police would call tailgating. There were indeed fuel savings, with caveats, says a report on the trials, made public June 1.

The report goes into a trailer-load of detail on the experimental design, the whodunit, the many results, and the usual ifs, ands, and buts, associated with complex tests, but the basic story is this: Three Volvo tractors carrying a package of gear including radar, video cameras and computers – developed by the California PATH Program (Partners for Advanced Transportation Technology) and designed to let the trucks safely maintain precise separation distances – were driven round and round a 6.5-kilometer oval to see if there were any fuel savings in traveling close together. 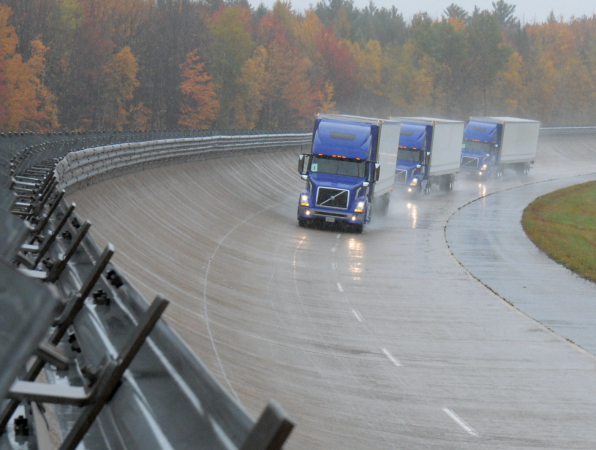 This international effort included PATH researchers, Transport Canada as the project lead, the National Research Council Canada in charge of the experimental design and data analysis and the PIT Group running the trials, providing equipment, personnel and logistics.

There were three separation distances, expressed in seconds and meters: 0.6 seconds (17.4 meters), 0.9 seconds (26 meters), 1.2 seconds (35 meters) and 1.5 seconds (44 meters). The experimenters sliced and diced the variables and results six ways to Sunday, but as a broad-brush statement, the lead truck saved basically nothing, the middle truck saved something, and the trailing truck saved the most.

For example, in the standard configuration (no side skirts or boat tails) and the shortest separation, the middle truck saved 7.4% and the trailing truck 11%. The aerodynamics bumped that up to a 9.4% and 12.3% fuel savings, respectively, but the advantages to the aerodynamically-kitted rigs varied, depending on the combination of experimental variables.

The combined fuel savings amongst all three trucks varied between 5% and 7.6%, in one part of the trial.

In general, the fuel savings decreased as the separation distance increased, although the report does note that more tests should be done to see just how far the trucks can be spaced apart while still saving fuel.

The rigs were run at two weights: 65,000 lbs, and 29,400 lbs, with weight removed from the trailers. Fuel savings increased from 1% to 2% for the unloaded trailers.

The trial results will support platooning projects in the U.S. and Canadian emissions regulations for truck model years 2018 and beyond, in some unspecified way. However, there are many more questions that must be answered, note the report’s authors. For example, will even shorter separation distances, such as nine meters, yield savings for the lead truck? What fuel savings are already happening out there at the typical, and legal, separations we see on the highways? How would two-truck platoons perform? For that matter (and this is a good one for Canada) how would a two-truck platoon stack up against a long combination vehicle?

How about lateral offset? That’s when one of the trucks drifts to one side or another. How does that influence fuel savings? Another real-world issue is the performance of mismatched trucks, say a dry van and a tanker.

Another one is the inevitable real-world problem of platoon interruptions. The report’s authors suggest running trials in which a car bobs in and out of the platoon, disrupting the distances and speed.

Last fall’s trials were important. The report, which includes nice explanations of platoon aerodynamics and the technologies PATH have developed, is an education.

You can download the report at: http://tinyurl.com/platoonresults. It’s free, if not easy!