THUNDER BAY, Ont. — The lonesome highway can be a solitary place for a truck driver, and though some crave this type of lifestyle, having a four-legged friend to share some time with would be a welcome companion.

The friendship may only last for a day or two, but for a group of drivers across Canada and the U.S., the chance to help a pet reach its new home is worth its weight in gold. 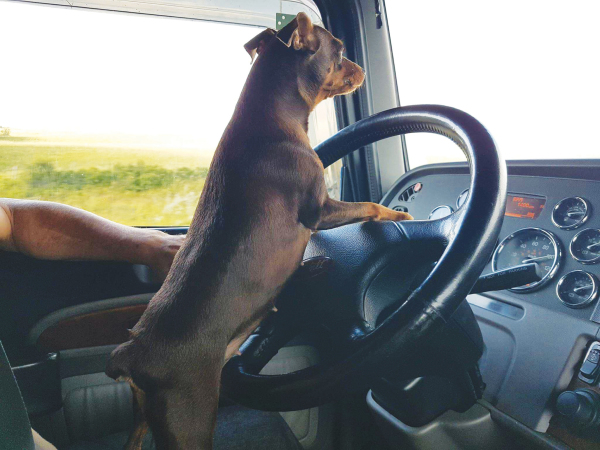 Margaret Foster, a fervent animal lover and former truck driver, started Furry Hobos N’ Highway Heroes nearly four years ago when she was asked about adopting a dog. She agreed, and ended up paying $120 to have her new pet shipped from Sudbury, Ont. to her home in Kakabeka Falls, approximately 30 kms west of Thunder Bay, Ont. About a 12-hour drive in total, Foster said that equated to $10 an hour to transport the dog.

She then looked into how pets are shipped across the country and realized that other than flying, there were really no alternatives. The cost of moving a dog from Ontario to B.C., Foster said, can cost anywhere from $600 to more than $1,500.

“That got my interest piqued and I got hold of a buddy and we started talking about it and I said I was going to see if I could get something rolling,” Foster said.

And get something rolling she did.

With a current network of around 20 drivers, Foster is the ringleader of Furry Hobos N’ Highway Heroes, an initiative that “paws it forward,” or in other words, provides the transportation service free of charge.

Considering Foster’s level of organization, the fact that they do not ask for any compensation is saying something.

At any given time throughout the year, Foster can have multiple dogs on the move. And the idea that it’s as simple as having one driver pick up the dog and drop it off is nowhere near reality.

“One dog took 17 people to transport,” Foster said. “That took a lot of arranging. Now I know why everyone used to say I should have been a dispatcher.”

Garnishing her home with whiteboards, Foster organizes the transportation of the dogs throughout Canada and the U.S.

During the time of her interview with Truck West, Foster had several dogs in transit, including those headed to Edmonton, Fort McMurray, Halifax, and locations in Manitoba and Nova Scotia, to name just a few.

Furry Hobos N’ Highway Heroes will transport any dog, whether it be stolen, sold from one owner to another, lost…it doesn’t matter. And about 400 have been moved by the network so far.

Foster said they even moved a St. Bernard in a Peterbilt – a sight to behold for sure. The dog was transported from London, Ont. to Calgary for a family that was in Ontario dealing with a health issue with one of their children and was faced with having to pay $1,500 to have their pet flown back home to Alberta.

The motto “paws it forward” really is all about providing a service for those who otherwise would struggle to do so for themselves.

Anyone looking to have their dog transported would first need to contact Foster. The shipper is sent a transport form and must prove that the dog has all of its vaccinations. Pets moving cross-border must also complete a five-way test, which includes screening for heartworm.

How far the dog needs to travel and its final destination will determine how many drivers Foster will have to recruit, which takes some logistical prowess to see who is going where and when.

Foster houses are also used if the dog needs to stay in one location during its journey.

Whoever initially drops the dog off to the first driver brings food and water.

“The reason we ask for water is because dogs are used to drinking water and if you bring their own water, they drink sooner, even if you give them bottled water,” Foster explained.

Once the transit plan is in place, a Facebook chat is opened between Foster, the owner of the dog, the driver(s) and foster people being used during the move, and the person who will ultimately receive the dog.

Though she manages to get by with the drivers and foster people on her current roster, Foster is always looking for more to join her network.

She understands the hurdle many company drivers could face for allowing dogs in their cab, as many carriers simply do not approve for various reasons.

Foster does, however, believe that companies that allow drivers to be part of the effort bring a certain level of good publicity and a positive public perception in doing so.

“It’s great free advertising and people notice it,” she said.

The majority of Foster’s drivers are based on Canada’s East Coast. She is in need of more drivers in the Montreal area and in the west.

Drivers are mostly referred to Foster by other drivers who have been part of Furry Hobos N’ Highway Heroes.

“Because we don’t charge we have no money for publicity,” she said. “It’s all word of mouth. We are what we are.”