ST. JOHN’S, Nfld. — On a dark February night, a 128-wheel Goldhofer hydraulic platform trailer does the limbo under deactivated power lines, lifted out of the way by utility lines people. Over a constantly salted and sanded road, it moves a 205-ton stator 37 kilometers to Soldiers Pond, southwest of St. John’s, Nfld.

This three-hour move is one of six carried out by Transport Bellemare International in service of the Lower Churchill Project’s Labrador – Island Transmission Link: three stators and three 225-ton rotors, which will be mated to become synchronous motors, but more properly called synchronous condensers. 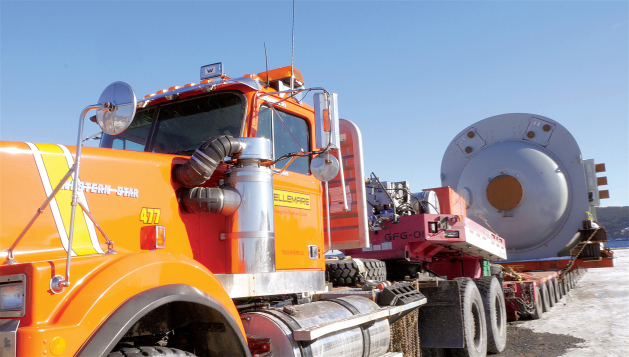 High-voltage direct current power flowing down from the Muskrat Falls hydroelectric generating facility in Labrador will be converted to high-voltage alternating current at Soldiers Pond.

“The purpose of the synchronous condenser is to maintain the stability and reliability of the electrical transmission grid as it adjusts to conditions during operations,” explains Stephen Follett, project manager, HVdc Specialties with the Lower Churchill Project.

The stators and rotors, built in Trois-Rivières and Sorel, Que., arrived by barge last fall at the Pennecon Energy Marine Base in Bay Bulls, for the hydro project owner,

Newfoundland and Labrador crown corporation Nalcor Energy. The 90-foot long Goldhofer, with 16 axles and weighing around 60 tons, along with five 1996 Western Star tractors with dual drive axles and 600 hp engines, and a 60-ft., 12-axle, self-propelled Goldhofer trailer, hitched a ride to the island on the barge.

The Bellemare team, 12 strong, including supervisors, engineers and operators, moved the stators and rotors off the barge with the 60-ft Goldhofer. Its hydraulics, which power two feet of up and down axle travel, are so responsive that the trailer can hold loads level even as the barge, moored alongside the wharf, bobs up and down on the waves.

In the Pennecon Energy Grand Banks Warehouse, the 90-foot Goldhofer does a hydraulic dip, backs under a rotor that is sitting on steel saddles, and then raises itself and its load up in just a couple of minutes. Pulled by three tractors and pushed by two more, the procession – the top speed for these loads is 20 km/h – works its way out of Bay Bulls, up the steep and narrow South Side Road, west along the Witless Bay Line, and then north to Soldiers Pond.

En-route, the hydraulics raise and lower individual axle ends, roll the whole platform on the curves and pitch it on the hills, to keep the load as level as possible.

Once safely down the steep access road and onto the converter station site at Soldiers Pond, the 12-axle Goldhofer takes the stator and moves it into place. It will be joined by the other stators and rotors, as well as seven 175-ton transformers transported by day from Bulls Bay by Mammoet, using another Goldhofer.

“Before we started the project, 65 poles were replaced and wires were raised for height clearance.” Because the rotors and stators are so big – a loaded stator soars 25 feet above the road surface, for example – roads had to be temporarily closed during transport. “Not all the wires could be lifted in advance,” Kwateng says.

The transport rules forbid traveling if the winds exceed 40 km/h, if gusts exceed 60 km/h, or if there is significant snow accumulation. (In mid-January, a storm dumped 10-ft. high drifts on the Witless Bay Road). If it is raining and below seven degrees Celsius, the Goldhofer stays put.

On the transport days, a local contractor salts down the road to re-melt the runoff caused by the warm days, that then froze at night.

“We hired a local company to take care of cleaning the road for us. The company starts at five o’clock in the evening and lays salt and sand on the road until 11 o’clock,” Kwateng says.

By the end of March, weather allowing, all 13 pieces were scheduled to be safe and sound at Soldiers Pond.