March 1, 2000
LAC ST-JEAN, Que. - As protests over fuel costs began to emerge in eastern Canada, it was Quebec's logging trucks that saw the first signs of relief from the price of the liquid gold.It began early in... 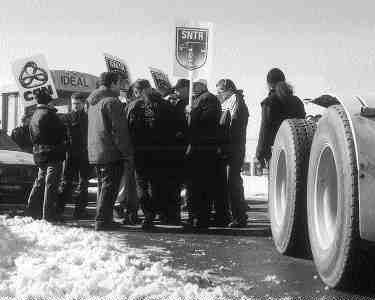 LAC ST-JEAN, Que. – As protests over fuel costs began to emerge in eastern Canada, it was Quebec’s logging trucks that saw the first signs of relief from the price of the liquid gold.

It began early in the month when Lac St-Jean log haulers, sick of being soaked by high fuel prices, were the first to park their rigs on the side of the road.

The action quickly turned into a call for a province-wide shutdown by forestry truckers, says Clement Belanger, the president of the Association Nationale des Camionneur Artisans Incorpore (ANCAI), which represents 4,500 bulk haulers. (Between 1,200 and 1,800 of which are log haulers.)

“After the first day of the shutdown,” explains Belanger, “the negotiations began. The paper producers understood that it would be impossible for us to continue working with the increase in fuel costs.” Because log hauling is a 24-hour-a-day operation in the winter, truckers were seeing their fuel bills increase by between $700 and $1,000 a week by January, according to Belanger. And the costs jumped even higher in early February.

Companies, knowing logs can’t be hauled out of the bush once frost turns to mud, began striking deals.

Some pulp producers agreed to sell truckers fuel at last winter’s price, but others opened negotiations by saying that they did not have to pay carriers more for fuel increases. Looking only for compensation for fuel, ANCAI asked for an 8.5 and 12 per cent surcharge.

Others offered log haulers per-load increases of six to 12 per cent.

“We are not happy, but it gives the carrier a chance to survive. If you get an eight percent increase per load it won’t pay for the increase in fuel at the end of the week. It still costs the trucks four per cent,” says ANCAI’s Michelle Cochran.

Another producer has agreed to pay log haulers 0.5 per cent more per load for every cent increase in fuel.

Log haulers and paper producers typically don’t have fuel clauses in their contracts.

“This is the first time we have seen such an increase in fuel,” Cochran says. But he plans to negotiate for such clauses when contracts come up for renewal in April and May.

“We won’t forget this year,” he adds.

Although Cochran explains that most of the regions are satisfied with the raises that they have negotiated, some of the paper companies – particularly in the Outaouais region – are still refusing to compensate for fuel increases. Negotiations were ongoing as of Feb. 18. And, says Cochran, “If the negotiations are not successful, the trucks will stay home again.”

Elsewhere in the province, the Confederation des Syndicats Nationaux organized several short demonstrations to protest rising fuel prices. On Feb. 11, truckers led a noisy convoy through Joliette, the home riding of Transport Minister Guy Chevrette. The following Tuesday the CSN bused truckers to the Laval yards of the load broker Affiliated, where it called for load brokers and shippers to come to the table and offer relief to O/Os hammered by rising diesel costs.