RIVERS, Man. – Al Lepp credits his success to high calibre drivers and modern, efficient equipment, but that might be a tad modest of an assessment. That’s because Lepp, who owns the Rivers, Man.-based Redline Transport, is a success story in his own right.

Lepp got into the business early. “I started trucking in 1980, six days after turning 18,” he told Truck West. “I got involved through the gravel industry for the first little bit and then on to Arnold Brothers transport as a lease-operator.” 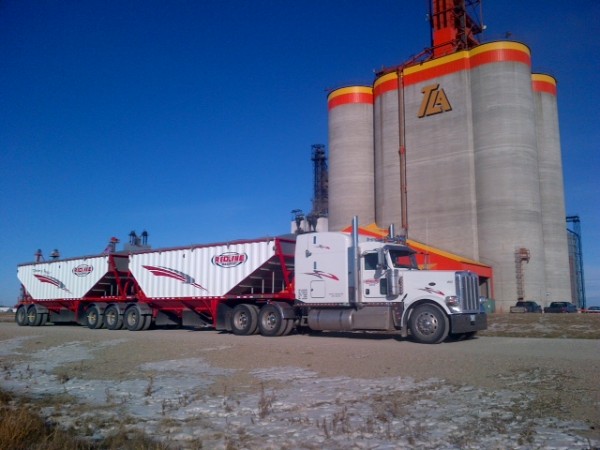 Opportunity for ownership knocked when a local general freight company went up for sale.

“I grew up on a farm in the community of Rivers,” he said, “and we decided to go with (the purchase) because we only lived a few miles outside the community, so it was a nice fit.”

From that point in 1986, Lepp threw himself into building the business, though there was a period when he thought he wanted to get out of it and actually sold off the company – for a while.

“We had made a deal with a carrier in the area and sold the operating name and the assets of the company,” he said, noting that the plan at the time was for him to start farming full-time.

As happens, however, the lure of the open road kept beckoning.

“The trucking roots were too deep,” he said. “I love it, I enjoy it and there was something missing when I wasn’t in ownership of it.”

Before Lepp relinquished control in 2005, the company had grown into a fairly diverse operation and “some things didn’t turn out as expected and that’s why we had decided to try the sale,” he said.

But taking the company back gave him an opportunity to make some changes to Redline Transport, to kind of re-envision it.

“We’re very focused on just grain now,” Lepp said. “I do all the dispatching, mechanical, sales, more or less everything, and my wife is the accounting department. It’s a very simple operation.”

Redline now has three Super-B units hauling grain across the prairie provinces, primarily Manitoba and Saskatchewan, with plenty of room to expand.

“We’re licensed for Alberta and British Columbia and Ontario,” he said, noting that they really haven’t exploited them yet, however.

Business this year has been “quite brisk,” Lepp said. “June and July were tough months in some areas of the province, in drought, and the opposite in others, (with) flooding, but overall the crop is coming off in quite good quality, fairly average to above-average yields, and it’s almost all in the bin.”

The company does a lot of its hauling between the elevators and the crushers or from elevator to elevator depending on where the commodities are needed.

“If a 120-car train comes in and an elevator is 30 cars short of grain and another elevator in the region has that product,” he said, “they’ll sometimes call on trucks to transfer grain from one elevator to another because that’s what trucks can do quickly compared to rail.”

Besides keeping things simple, Redline’s focus on hauling grain also helps enhance the lifestyle of the people who actually do the hauling.

“The whole idea (behind) primarily hauling dry bulk commodities is that it’s a good life for drivers who aren’t really looking for long-haul, where they’re out on the road for inconsistent hours,” Lepp said. “You’re usually within three to four hours of home – and sometimes you’re home every night during the week.”

Redline doesn’t have specific programs to award employee performance, but the small size of the company allows management stay close to employees all the time.

“I’m doing my recognition program every day,” Lepp said, “hopefully treating the drivers with respect and being honest with them – and leaving them to make many decisions on their own on the road.”

Lepp noted that Redline keeps ahead of its competition because “we service the heck out of our customers. We have drivers that I believe are the best in Western Canada, we put them in good equipment that we feel is competitive with anything out there on the road and we try to pay them fairly, treat them with respect.”

That way, he said, “when the customer meets the driver, the driver is hopefully on board with the company as much as I am and anxious to get that business.”

Redline concentrates on repeat business, which Lepp said means the company has to prove itself worthy of being called back.

“Our goal is to be the first call when a customer is looking for a truck to haul dry bulk,” he said.

Running a small company poses its own challenges in trying to differentiate yourself from the big guys and of course it also limits the resources it has on hand.

“We have to go above and beyond in the service to our customers and show why it’s worth giving a call to Redline Transport,” Lepp said, noting that it all comes down to the grassroots. “If the drivers and the equipment can do the job needed to adequately meet all the safety regulations, food regulations and quality standards, there’s no reason we can’t compete. You have to be brave enough to take the work and work hard enough to get it done, but you also have to do that honestly and not take on more than you can handle.”

Safety is a huge challenge in any trucking business, but since Redline works in what’s basically the food chain, things can be even hairier.

“With a lot of the products we handle there’s zero tolerance on contamination, whether you’re going to a food grade product or switching commodities in the seed industry, fertilizer etc.,” Lepp said. “That’s a big challenge, but it’s also worth doing right, so it’s a rewarding challenge.”

As for the health of his chosen industry, “it’s a very rewarding industry, but it’s also a tough one. It’s very competitive and it takes a lot of long hours to do it right and make it happen – but whatever blood you’ve got flowing through, you put it to the best use you’ve got, and for me the trucking and agriculture scene have been where I chose to use my skills.”

Lepp is also very much at home in his home province.

“Sometimes you call it unexciting to live in Manitoba,” he said, “but I’m very proud to live here and very excited about the pace of the economy.”