MOOSE JAW, Sask. – Scott Fogal could not be happier that his oldest son has jumped behind the wheel of one of his company trucks.

Fogal Transport is a small operation in Saskatchewan, hauling livestock throughout the province, as well as Alberta and into the U.S. But that doesn’t mean this two-truck operation isn’t an important part of the Fogal family, and one Scott hopes will be around for years to come. 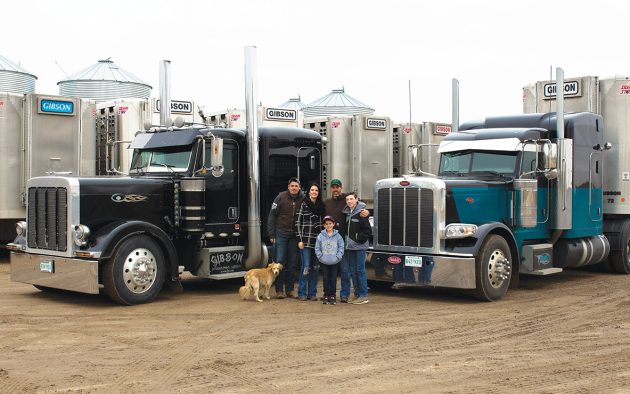 Scott started the company in Moose Jaw in 2003 with one truck hauling crude oil and asphalt. In 2010, he expanded, adding another truck and hiring a driver to transport crude oil during the spring, summer, and fall, while the company moved bulk goods during the winter.

In 2014, Scott met his wife, Tamara Fogal, and decided to add another truck. With three trucks at his disposal, Fogal Transport could now use one for asphalt, another for crude, and the other for bulk goods.

“After about four years with drivers, and my son coming of age to drive, he decided to get his Class 1 and wanted to drive for me,” said Scott, with a clear sense of pride that his son made the choice to join the family business.

It was at that time, with dropping rates and overhead costs mounting, that Scott chose to sell two of his trucks to purchase a new model. Fogal Transport had become a family-only company, with Scott and his oldest son, Tristan, steering the ship.

But Tristan is not the only Fogal boy in the picture.

“Family for us is of huge importance, as we have three boys, aged 21, 12, and eight, that keep us busy year-round with various sports and school events,” said Scott.

“While our oldest boy drives for us, we still like to make sure we spend all the holidays together and annual camping trips in the summer, as we are often gone and miss special events during the year.”

“Our boys are learning the importance of hard work and the sacrifices that sometimes need to be made to keep the bills paid and food on the table,” said Scott, “especially with the ever-changing economy.”

Scott said prior to shedding two trucks from his fleet, he employed a pair of very good drivers, something he said is difficult to find.

“We found it hard to find quality drivers who would not just hop in and drive,” he said, “but actually take care of the equipment.”

Now that Tristan has joined the company, Scott is happy with how Fogal Transport has evolved since its inception.

“It is just a different understanding and expectation we have between each other that I don’t think other companies have unless they are strictly family owned,” Scott said, adding that he doesn’t see the company changing much in the next decade. “I just hope to one day hand the company down to my son and his family when that time comes.”

There are aspects of the industry that concern Scott, particularly when it comes to the rising costs of parts, labor, fuel, and overall operations, all while rates in the oil sector have declined.

“I spent 16 years in the oil industry and was doing well, and the last couple of years it has become more of a struggle to find stable year-round work that we ended up pulling our trucks out of the oil industry and moved them both over to livestock, which we know has its slow times, but overall is more stable,” Scott explained. “We feel with the cost of oil coming back up that the cost of everything else should equalize, not continue to rise. If costs are increasing, so should the rates.”

Scott said high costs and lower rates have been a struggle for his company over the past couple of years, and the choice to get rid of two older trucks, which incurred higher maintenance costs, for a newer model has paid off.

“It has been a great last year to have been able to run with my son and it is important that I have been able to make the changes in the number of trucks to keep costs low,” said Scott, who has also brought his younger boys on runs to show them what it’s like on the road.

“My company may have been started by my passion for driving and the open road, but it has become a family affair and it has been great to be able to teach and have my oldest son driving with me, and a wife who supports me and my career choice,” said Scott. “She takes care of all the background work at home with the younger boys and manages Fogal Transport while working a full-time job in the trucking industry herself, so she fully understands that it’s not easy being away and understands some of the sacrifices that come with it all.

“I hope to keep this a family business for years to come.”