CAMBRIDGE, Ont. — Getting fired could possibly be the best thing that ever happened to Shawn Baird, career-wise.

Because had his great uncle not fired him, Baird’s own successful business – Sharp Transportation Systems – might never have been conceived. Like many trucking companies, Baird started his business from one truck out of the basement of his home. 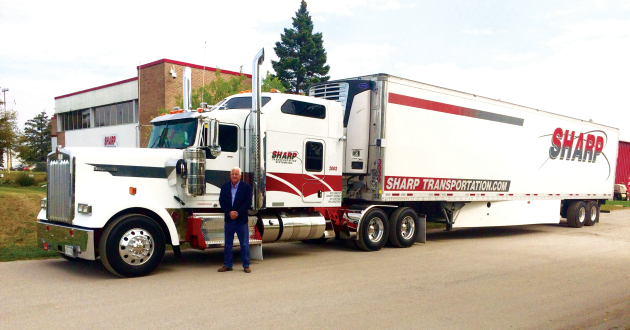 “I was driving for my great uncle’s company and then I was fired,” he said. “I slighted him a little bit. But I’ve always been a worker so I didn’t like the sensation of being fired, so I started Sharp on my own in the basement of my house. We started off with just one truck in 1999.”

Now, Sharp boasts 54 trucks and 132 trailers. Its headquarters are in Cambridge, Ont., and operations have since outgrown Baird’s basement. Today, Sharp primarily hauls pharmaceuticals across the U.S. border.

“And that’s all temperature controlled,” he said. “I’d say the other 40% would be hauling office furniture across the border.”

Sharp has yards in Michigan, Moncton, Montreal, and Halifax, and is one of the rare trucking firms that actually has a line of drivers waiting to drive for it. That’s right. For Sharp, the driver shortage is non-existent. In fact, Baird challenges the notion entirely.

“There’s always talk about the driver shortage,” he said. “Sharp has never had to look for drivers or advertise for them. We’ve always had drivers waiting to come on. I think the larger issue is…there’s not as much of a shortage of qualified drivers as there are good companies for drivers to work for.”

At the time Baird was interviewed for this piece, he claimed to have six drivers waiting for Sharp trucks to drive. To be a good company to drive for, Baird said that it has to first and foremost be safe, and not treat employees and drivers like a number.

“Anybody who contacts us for a job, we ask them, ‘What made you think to call us?’ and the number one response is, ‘From your trucks, you look like a good, safe company to work for.’ We get almost all of our drivers from word of mouth from our other drivers, or from them seeing our equipment on the road,” he said.

Baird says that when it comes time for Sharp to go shopping for new trucks and trailers, it sends out a survey to its drivers to ask them for their opinions.

“The way I see it, I think it’s safer to ask them what they want to drive,” he explained. “Why should I buy a truck and force them to drive it? I believe my drivers are great at their jobs, and they’re valued so I want them to know I care about their opinion and what they want drive.”

Right now, Baird said he has 15 new Kenworth W900s ordered for his drivers.

“Drivers are involved in spec’s of the truck, too,” he said. “They work with salespeople and they make changes they want to up to $10,000. They pick detail packages themselves and the interior of the truck is important as well, so they get to have a say.”

And while Sharp sounds like a great place to work, it’s not easy to get into the driver’s seat. Baird explained that the hiring process for new drivers is very thorough, because he knows “a truck just sitting in the yard for a while can cost you $3,000, but if you put a wrong person in it, it can cost you $10,000.”

Potential drivers for Sharp go through an extensive screening process that involves a 10-year background check and four-hour interview.

“Because we know sometimes drivers will say he’s one person in the interview, but he’s someone else on the road,” Baird explained.

However, if you are chosen to drive for Sharp, you can enjoy the benefits the company has to offer, including joining the company’s philanthropic community.

Over the course of its lifetime, Baird estimated that Sharp has done between 200-300 animal rescues for the Humane Society. And one week before the interview with Truck News Baird was in the Dominican Republic to help with Hurricane Irma relief.

As for the future of Sharp, Baird said, he won’t be growing through acquisitions, rather he hopes to grow steadily using his “ABC formula.”

“We have looked at acquisitions, and I don’t see the value of buying another company,” he said. “The reaction (from staff) can go either way and can be a lot of work. So, we grow through a simple philosophy: A is the customer, B is the truck, and C is the driver. A lot of companies out there will try to do B first and buy trucks, then they go to C, to find drivers, and then try and find A, the customer. We don’t do it that way. We work on A first and we negotiate a customer for six to seven months. Then we buy the trucks, and then look at the drivers. I believe that you should always make sure you have the customer first and then everything else will fall into place.”