CASTLEGAR, B.C.  — It’s a way of life for truck drivers in Canada’s most westerly province, and the folks at the Mountain Transport Institute (MTI) know what it takes to strap on tight tire chains.

During its Professional Driver Appreciation and Chain-Up Day Oct. 14 at its location in Castlegar, MTI instructor Mike Boultbee offered Truck West a first-hand look at just how easy the process of chaining up a tire can be with practice – and admittedly, perfect environmental conditions.

The toss
Chaining up the front axle, Boultbee pulled the chains off the hanger and tossed them over the top of the outer tire, ensuring the hooks were to the back. He then unfolded the chains, laying the remainder over the inner tire before adjusting the chains to fit proportionally over both tires. 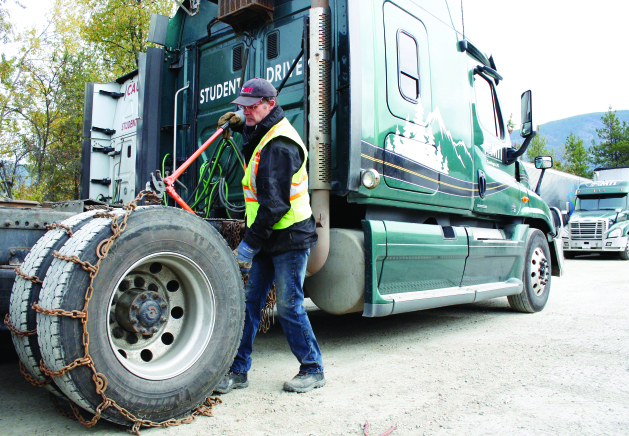 “Honestly, if you’ve done it way too many times, there’s a certain flick of the wrist and they just land in the right spot all the time,” Boultbee said.

He repeated the process on the other side of the tractor, saying, “You don’t have to carry the chains, it’s OK to drag them,” but added, “The hooking devices on chains, there’s an advantage to not running them over, as you can damage them.”

To ensure the next step works, the distance of chain on the tires must be equal on each side, so Boultbee adjusted the chains so that the tails at the back of the tire on each side were just touching the ground.

“That’s basically ready to roll in place,” he said. “My chains are equal in their length over the tire and now I’m going to back up and stop where my hooking device is and come up to…let’s call it 10 and two…about three quarters the way up the tire.”

The backup
After backing up, rolling the chains on the tire, and tidying up a bit, Boultbee hooks on the center chain first, then inside, and finishing with the outside length.

Any extra chain links should be tied back in with the hook so it doesn’t whip when in motion.

Boultbee repeats the hook up process on the other side prior to tightening.

The tightening
In addition to tightening the cam locks, using what is called a spider bungee cord works wonders when it comes to making sure your tire chains are tight and secure to the tire, but

“The tighter the better, without spending all day on it,” Boultbee said. “Somehow we need to come up with a phrase of we need to be reasonable about that.”

The tighter the chain is, the more speed they can handle. Boultbee advised, however, that when operating a truck with tire chains, drivers should not exceed 40 to 50 km/hr to avoid excess wear.

The summary
“We don’t have ice and snow not allowing them to roll into place, we’re not on a side hill, we’re not working under a fender or trailer…it’s a wonderful, perfect scenario,” Boultbee said of the demo. “But it can be created 90% of the time if you have the wherewithal to get them on before you need them at the bottom of the mountain.”

As for how fast one should drive while using tire chains, Boultbee said drivers should realize that if they are using chains it means they are operating their vehicle in a cautious environment.

“There should be common sense in there somewhere,” he said. “If you have a very slight amount of snow, they slap on the ground and they wear out. If you’re running on wonderful packed ice, they don’t wear as aggressively.

During the chaining up process, one of the chains had been run over creating a pinch, which Boultbee had to repair, underlining the importance of taking care of your chains.

Boultbee said drivers should make every attempt not to drive over the hooks on the chains, as this can cause damage and issues when attempting to chain up your tires.

CVE perspective
West Kootenay supervisor for Commercial Vehicle Safety Enforcement (CVSE) Jason Odland said drivers in B.C. should be prepared for adverse weather conditions at any time while traveling in the province, and should be using tire chains and other measures to gain better traction.

“Chains in this neck of the woods will not do it,” Odland said. “They need good winter tires, too, for the hills and stuff around here because they just spin on the grades.”

As for when a driver should be putting chains on their tires, the answer in B.C. is a simple one.

“If you have to think about ‘Should I?’ then you should do it,” Odland said. “As winter comes, these chain up areas get smaller and smaller, and it is kind of a crap shoot here if you’re in one of the big seven or eight axles…if you’re thinking about it, throw it on.”

Odland said most drivers who are from the West Kootenay area know when they need to put chains on, even if the maintenance contractor who is responsible for turning the ‘chain up’ sign lights on is a bit late flicking the switch.

And there is no shortage of incident the CVSE has on its plate because drivers neglected to put on tire chains.

“The majority of our job in the winter time is on chain ups,” said Odland, pointing out that the area he covers in the West Kootenays has the most chain up areas in the all of B.C. at 22, with 46 province-wide.

MTI employs what it calls “the MTI way” approach to teaching Class 1 drivers, hiring professional truck drivers as instructors and offering over 100 combined years of trucking experience and 18 years of training drivers in the industry.

Recognizing the need for a high standard of driver training, Andy Roberts launched MTI, bringing more than 18 years of driving and owner-operator experience in the mountains of Southern B.C. to the table.