SASKATOON, Sask. — Recent statistic show that in 2016 there were 315 truck drivers who spoke a Cree language, and the numbers have been in decline for the last 15 years.

More truck drivers in Canada speak Greek, Gujarati, Hebrew, or Creole languages than do Cree. Compare that to the number of Punjabi and Hindi speaking drivers, which numbers 35,085 in total, and it puts the lack of Aboriginal drivers in perspective.

With the well-documented shortage of qualified drivers in Canada, and North America as whole, Indigenous workers are clearly an untapped resource for many in the industry. 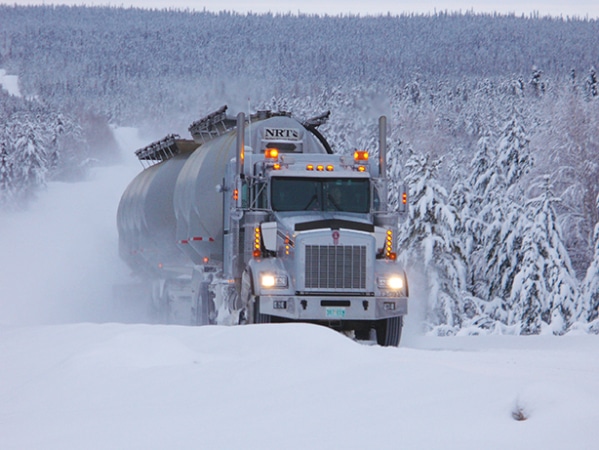 But that does not mean this group has gone totally unnoticed.

Northern Resource Trucking (NRT) is one carrier looking to entice more Indigenous workers into the industry. Launched in 1986, the company was originally structured as a partnership between the Lac La Ronge Indian Band of La Ronge, Sask., with a 51% share, and Trimac Transportation with 49%. In 1995, the partnership expanded to include northern Aboriginal and Metis communities.

At present, NRT is 71% Aboriginally-owned, many of the owners representing the northern communities impacted by the development of the uranium industry.
Wendy Featherstone is the human resources manager for NRT, and she said there are several challenges when it comes to recruiting Indigenous workers into the industry.

“One of the easiest ways to get into trucking is by having a family member as a truck driver, or having trucking as a necessary part of an associated business, like farming or construction,” said Featherstone. “The more exposure people have to trucking and mechanics, the easier it is to learn the business and pass the required training and tests. Even obtaining a truck to take the road test can be a barrier for people.”

Featherstone said for Indigenous Peoples, trucking has historically not been a traditional industry in their culture, and the only way to learn and experience what it’s all about is through training, which is expensive.

Northern Resource, however, has been proactive in this area, creating its own training school based out of La Ronge.

“We have had hundreds of students graduate through our training program, and it increases the pool of drivers available,” said Featherstone, “not only to NRT, but to other companies in northern Saskatchewan, as well.”

Deb Steel, news director for the Aboriginal Multi-Media Society of Alberta, said the most important thing when it comes to attracting Indigenous Peoples to industries like trucking is relationship building, as well as knowing which groups are already working with those communities.

“If there is a need in an Indigenous community, there is a group trying to fill that need,” said Steel. “Take for instance, Women Building Futures, a company that trains women in the trades and industry professions. From the grassroots to the corporate level, like the Canadian Council for Aboriginal Business, a simple call will get you a referral to the right source and qualified, trained and experienced staff. And that call might just open up other opportunities for your business.”

Steel said there are huge networks of companies working together to employ Indigenous workers, as well as Aboriginal businesses as sub-contractors and experts in their field.

“Let’s remember that 60% of First Nations people live off reserve, and Indigenous Peoples also include Metis, Inuit, and non-status peoples too,” she said. “That’s 1.4 million people across the country. That’s a lot of potential.”

A lot of potential indeed.

A study completed by Trucking HR Canada this past May indicates that 46% of Canada’s Aboriginal Peoples are under the age of 24, and more than half live in cities.
Canada’s Aboriginal communities are made up of 60.8% First Nations, 32.3% Metis, and 4.2% Inuit.

The study says some of the barriers in recruiting Aboriginal workers include assumptions about the industry, a lack of understanding of what kind of jobs exist in the industry, and on the employer side, a misconception of what Indigenous Peoples look for in a career.

Trucking HR Manitoba submitted an application for the Manitoba industry sector council, and one of the four targeted objectives was to solicit partnerships with the Aboriginal community, an effort that is not new to the MTA.

“The MTA has previously partnered with the Centre for Aboriginal HR Development and we applied for program funding for a Class 1 training program,” Shaw pointed out, adding that they also recently met with representatives from the Aboriginal Business Council and the Aboriginal Chamber of Commerce.

Shaw said there is a large Aboriginal population in Manitoba, a younger population, which means partnering with the community makes sense for the industry.
Arrow Transportation Systems out of Kamloops, B.C., is another carrier that offers a professional driver training program for Indigenous Peoples.

A partnership between Arrow, BCT Projects, Thompson River University, and Columbia Transport Training, the effort is an attempt to combat the driver shortage in the industry and high unemployment in First Nations communities.

The program provides training and education through Thompson River University to acquire a Class 1 licence. Graduates then do on-the-job training with Arrow’s driver mentor program.

Dave Earle, president and CEO of the B.C. Trucking Association, said his association does not have any specific policies to address the hiring of more Indigenous workers, but recognize the need to engage this under-represented group.

“Engaging Canada’s Indigenous Peoples is important for the continued success of our industry,” said Earle. “We have begun working with public and Aboriginal training centers to better understand the needs of Indigenous persons and the obstacles that they face entering our industry.”

Earle said the price tag attached to provincial licensing programs can be a barrier to individuals looking to acquire a commercial licence.

“The expense of quality training and a lack of financial supports is another issue we are working with government to mitigate,” he said.

Featherstone said her company’s ability to train its own drivers has been the key to their success.

“The routes that we travel are directly through some of our partnership communities,” she said. “No one knows the roads or the needs of the communities better than those members, so it makes sense that we direct our training there.”

“Our graduates and drivers are in high demand from not just other trucking companies, but other industries as well,” she said. “We have had our graduates move on to successful careers in mining, milling, policing, construction and countless other careers. The key to the success of our drivers, both with us and elsewhere seems to be the training and the safety standards that are in place.”

Steel said relationship building with Aboriginal communities has been happing for some time.

“They won’t be starting from scratch or inventing the wheel,” Steel said. “There are huge benefits to this relationship building. If your head is in the place where you are willing to learn about working with Indigenous populations, then there are plenty of folks who will help guide that effort.”