TORONTO, Ont. — When it comes to trucking, the proof is in the planning, according to the executives and managers at Carmen Transportation.

Carmen Transportation is based in Toronto, Ont., and has been fully family owned and operated since 1985. Today, the business is run by Vince Tarantini, son of founder Carmen.

Carmen started the business with a single truck in 1985 hauling furniture locally in Toronto. 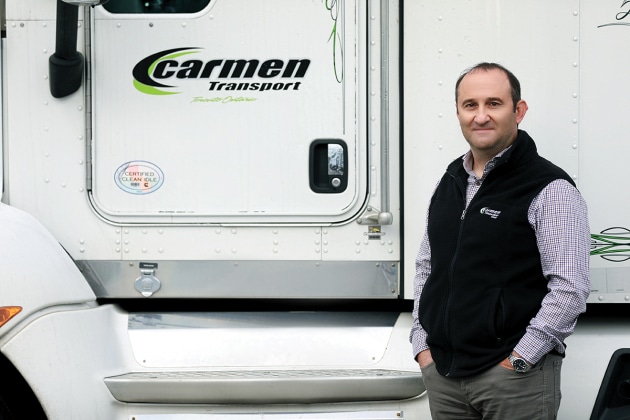 “He started the business with just one five-tonne truck,” Tarantini recalls. “And then when I turned 18, he bought a used truck for me. And by the time I finished school, we had grown to more than a handful of trucks, and I decided at 22, to stick around and make a go at the business, and I’m proud to say that very first customer we had in ’85 is still our customer today.”

These days, the hauler has expanded into the U.S., and transports furniture, HVAC units, power tools and other commodities you would find on your typical store shelf. It boasts just less than 100 trucks and 300 trailers.

Tarantini says close to 70% of its business is cross-border freight, with the remaining 30% reserved for local and regional freight.

What makes Carmen stand out from the competition, according to Tarantini, is its attention to detail, and willingness to create and execute a detailed plan for its complex deliveries.

“Our greatest strength has a lot to do with our business process,” he explained. “We are very mindful of everybody involved in a move, whether you’re the driver, the technician, the office staff – we all make sure no one is overburdened and everything is pre-planned. We do a lot of planning here, because we know from experience, the more we plan, the fewer issues we can run into.”

Planning was specifically important during one important move two years ago, Tarantini explained.

“We had a load to Vegas, and the shipper released the load late,” he said. “They were still manufacturing the product but it had to get to Vegas for a store opening and we were already behind. The customer asked if we could deliver the load by team. But, we don’t run teams. And we weren’t going to compromise on legalities and have any drivers go over their hours-of-service. So, we decided to set up a team of drivers to do relays. It took an hour of planning and three drivers to execute the plan. In the end, the trailer never stopped moving, and all the trucks had legal miles – it only took some planning to figure out.”

Because of this commitment to safety and compliance, Tarantini said Carmen is very particular in who it hires. In fact, he admitted the hiring process at Carmen is a very slow process.

“We have lots of applicants, but we are slow to hire,” he said. “Because our recruitment strategies are unique to each person.”

“We do this because it leads to less turnover. I’d rather have someone realize this job isn’t for them during the interview stages, then after I’ve hired them on,” he said.

“We struggle like everyone else,” Tarantini said. “And through exit interviews we found that sickness and illness was up, and that’s because the average age of our driver is 54.”

Mostly though, drivers are leaving to retire, he said.

For the drivers that are staying at Carmen, Tarantini said they like the job because he sticks to his word.

“We always try and deliver what we say we’ll deliver,” he said. “For example, when you’re first hired, the job offer has your job description on it, and details exactly what your job will be able. It also lays out your pay package. Your pay is never just verbal. It’s always in writing in a contract they sign.”

This method of hiring contributes to its biggest challenge – growing organically.

“It’s very hard to grow without acquisitions,” he said. “Our methods slow us down. But we want to make sure we are hiring the right people – keeping retention up and turnover down. We set up our core values a few years back and we live by them. We aren’t interested in growing purely by numbers. It’s about finding people who share your core values, hiring them and retaining them.”

Looking to the future, Tarantini says his focus is on strategic growth.

“I don’t want to dilute our safety score or our claims ratio. I don’t want to compromise anything just to grow for numbers’ sake.” He said. “I just want to get better as we go.”