The trucker who wants to make his customers smile 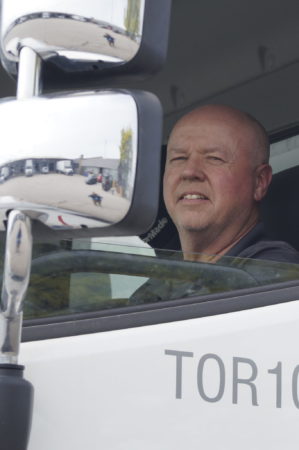 There were many “good moments” in Jim Smith’s 26-year trucking career, but one stands out.

That happened a couple of years ago when his employer received a call from a man who said he wanted to thank Smith for a “fantastic service” provided to his mother.

“The driver that showed up treated my mom so well,” the man told Smith’s colleague at Speedy Transport, based in Brampton, Ont.

Smith said he then remembered what was it all about. He was making a routine house delivery in Hamilton, Ont., and an elderly, blind lady answered the door. He put the package in the garage on her request and also helped her sign the shipping documents.

“I was just doing my job. If we can make the customers smile before we leave, that’s fantastic,” Smith told Truck News in an interview after another day of his Brampton-Hamilton-Brampton run in his Hino straight truck.

He clocks between 300 and 400 kilometers, driving up to 12 hours every day, five days a week. While Smith likes his current route, he began his career in downtown Toronto where driving in the alleyways was not always easy.
“On many occasions, I had to fold the mirror in.”

In all, he has driven almost two million kilometers. Except for a few inadvertent detours into no-truck streets, Smith said his driving record is pretty good.

The job has taken its toll on his family, though. A father of two sons, 22 and 21, Smith has been separated from his wife for five years now.

“She complained a couple of times that she had to raise our children alone.”

Smith now lives with his girlfriend in Burlington, Ont. He estimates that the divorce rate in the trucking community is about 50%. He said he came up with that number from his interaction with other drivers.

“So, the key is probably finding an understanding woman,” Smith said, quickly adding that “not too many of those are there.”

Smith’s father was a truck driver, but his sons seem to have no interest in pursuing a career in the industry. That’s disappointing because the job is still lucrative, he said.

“For a single guy, going on the road (longhaul) is fantastic. You go, drive for a couple of years, make money and come home,” Smith said.

His advice to young drivers: “Treat the customers the way you like to be treated.”

Smith was named the Toronto Regional Truck Driving champion this year and the Ontario champion last year. The national championship was abolished by the time he won the provincial title.

Smith is happy that he won the truck rodeos, but he’s not bragging about his victories.

The annual championships offer truck drivers an opportunity to showcase their skills. The competition involves a written test, an obstacle course and a truck inspection.

Smith believes participating in the competitions has helped him to get closer to the management and “hang out” with the bosses.

“I respect my bosses more…I think I am also getting more respect, but I have also been here 26 years,” he said. “I still work the same. I don’t slack. I work hard, and they appreciate that. They know that.”

James Temple, vice-president of human resources at Speedy Transport, said the company has received numerous compliments about Smith’s service and is fortunate to have him.

Andre Poirier, vice-president of transportation, called him the “King of Hamilton,” who has been to every area imaginable, and probably to areas that a truck has no business being.

Abdul Latheef is the associate editor of Today’s Trucking and trucknews.com. He has extensive international experience as a reporter and editor. Reach him at abdul@newcom.ca
All posts by Abdul Latheef
Print this page