In any business, you’re regressing if you’re not progressing. That’s especially true when it comes to tire purchasing in the trucking industry, as technology evolves at the speed of light and new products continuously promise better performance and return on investment. So, how do you replace your existing tires with some that will improve your bottom line?

Overall cost
How you shop for tires will sometimes be dictated by the size of your company. For instance, Calgary-based tanker transportation company Trimac uses the request for proposal (RFP) method, explains Gordon Max, director of rolling assets. The company has 1,200 tractors of its own, plus roughly 900 that belong to owner-operators who are part of its tire buying program. Add to that a fleet of trailers in the range of 6,000, and you get impressive purchasing power that allows you to ask multiple tire manufacturers: “What can you do for me?” 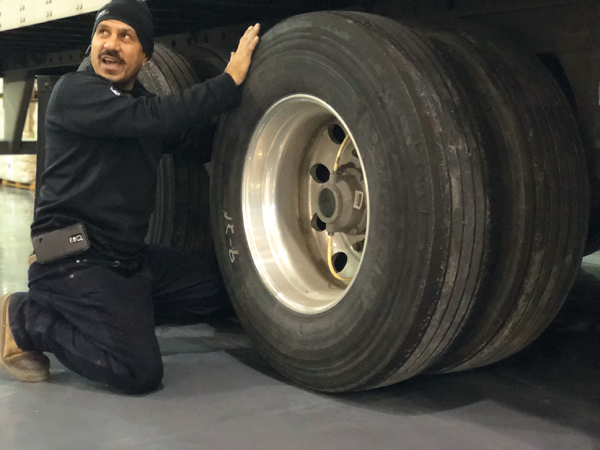 But the tender with the lowest price won’t necessarily get Trimac’s tire business and it won’t be a “one-size-fits-all” solution. Max and his team ask for optimized tire solutions and specific models for each position, whether it’s steer, drive or trailer axles. And not all tire manufacturers are invited; Trimac only deals with Tier 1 suppliers as it needs to optimize tire life with multiple retreads – the average number of retreads varies from three to four per tire – and quality casings are needed in such cases.

“We bring suppliers in with a list of questions to answer. And then we narrow it down to, say, three suppliers. We don’t even look at the price at that point,” Max says, because the company looks at the overall tire life value, not only the purchase price.

In Montreal, Energy Transportation Group is a medium-sized fleet with 56 tractors and 107 dry van and temperature-controlled trailers. But the purchasing approach is similar, explains president Michael Cinquino, who also prefers to buy from well-established brands for tire casing quality considerations.

“If we know that a tire that’s $100 cheaper wears unevenly and we’re not really able to retread them more than once or not even that one time because it’s so uneven, we wouldn’t even consider purchasing it,” Cinquino says. Though he considers a $100 price difference to be significant, he would rather look at the big picture. “The price comparison only comes in after we’ve run the diagnostics and the analytics on the tires to ensure that they are quality tires and then we’ll put that into our financial model and look at our return on investment.”

Testing before buying
Some basic tire buying criteria remain the same for any fleet, but you still need to adapt them to your specific applications. Low rolling resistance tires offer great fuel economy, but will they offer good traction in colder climates? Will the tires wear evenly for the best fuel economy and retreadability? Can they perform well under different weight limits in Canada and the U.S.? Both Trimac and Energy fleet managers agree that only real-life condition tests will verify that. Both have cross-border operations, so cold to hot weather adaptability is one of their criteria.

Such versatility is particularly important at Trimac, as it spec’s its units basically the same across North America.

“If we have capacity in Florida with equipment because of a loss of a contract or a change of business and we have gained some business in, say, British Columbia, we can move those assets fairly easily without doing a lot of changes,” Max says. And that, of course, includes tires.

Testing tires before committing to large purchases is crucial and the most important aspect is making accurate comparisons by testing different models or brands of tires on similar routes, with similar loads in similar conditions to get a fair evaluation.

“We do our due diligence before committing to a brand or model,” says Cinquino, whose company is currently running tests on a new tire model. “We’ll put tires on different units that are running in the same application and with that, after about a month I would say, we’ll look at how it wore, fuel economy on those tires as well.”

The procedure is similar at Trimac, according to Max: “We pick four different runs throughout North America, which represent the different hauling areas that we do, so obviously Western Canada, the Rockies, the Toronto area, and down south in Houston and the Los Angeles area.”

Determining what model or brand to purchase after such tests is a balancing act between performance items, Max points out. “If the rolling resistance is very, very low and it’s the best tire out there for rolling resistance but the casings have a high failure rate for retreadability, then we have to consider that as well because we have a retread program,” he says. “All of those items are basically of equal importance. If one falls out at the cost of another, we may be hindering the performance of the fleet.”

After-sale service
Good, quality tires that were carefully selected will last a long time, and that’s why after-sale service is another consideration for fleets before committing to a tire brand or model.

Problems can always arise, and your tire sales rep is often your first line of communication with the manufacturer. He or she should be able to help you.

“We feel that there is a lack of knowledge in the sales of tires,” Cinquino says, insisting that he doesn’t put everyone in the same basket. He doesn’t ask that every sales rep has every answer on the top of his head but at least to be resourceful enough to look for solutions, come back and do some of the analytics with them.

At Trimac, a given manufacturer could even be turned down if pre-sale and after-sale service is not up to expectations. “Helping us save on our overall tire costs is one of our key factors in choosing a tire manufacturer. It can make or break them if there’s a tie between two,” Max says.

Fleet responsibilities
Fleets have responsibilities of their own after the tire purchase to reduce overall tire costs, for example by maintaining them correctly and keeping them at the right pressure at all times.

Organizing your used tires and casing inventory will also help stretch every penny’s worth out of rubber as it will help avoid dual mismatches and buying new tires that you don’t need if you have the right casing ready to be retreaded that’s easy to identify and locate.

For instance, Trimac clearly marks used tires in its storage container. “We usually use a bar code system, so we know the whole history of each casing,” Max says.

More frequent trailer alignment can also save money in the long run, Cinquino says. Energy recently started aligning trailer wheels every six months or so, instead of once a year.

“We’ve been placing a lot of emphasis in realigning our trailers and we found that there has been a lot more of a consistency in the life that we’re able to get out of a tire and also in the tread consistency for a longer period of time,” Cinquino concludes.