by Derek Clouthier May 26, 2016 @DerekClouthier

SASKATOON, Sask. – Jim Clunie has seen his company rise from its humble beginnings in Tisdale, Sask., where his parents, Gordon and Irene, launched Kelsey Trail Trucking in February 1981, to the successful flatdeck hauler that it is today.

Now headquartered in Saskatoon, Sask., Kelsey Trail started as a small, three-truck operation with only a few base customers when Gordon, an owner/operator in the late 1970s, decided to venture out on his own. 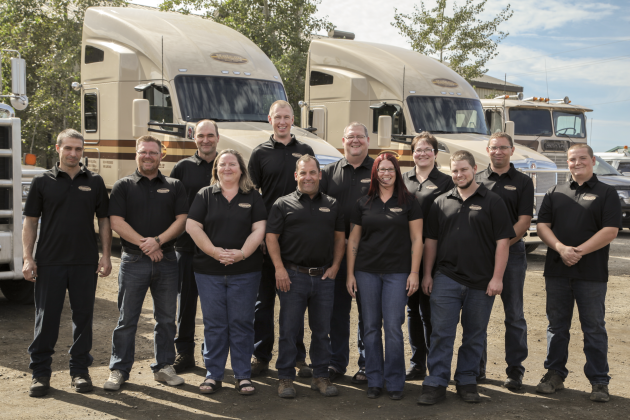 “For a few years it was just a really small, family-owned business and it was pretty tight-knit,” Jim said.

After a couple of successful years of operation, Jim’s mother decided to leave her job and move over to manage Kelsey Trail full time, and the company began to grow “not too rapidly,” as Jim said, but at a steady pace.

During the ‘80s and early ‘90s, Jim’s parents built up the company to become a 10- to 15-truck operation, hauling mostly steel on flatdeck trailers from Vancouver to the Prairie Provinces, but also some grain during the early years.

“By the mid- to late-‘80s, we were going more toward Toronto to bring goods back into the prairies,” said Jim, “and that’s still what we do today.”

Jim said he believed the ‘80s were a challenging time for his parents to be running a trucking company, with varying interest rates, market changes and the deregulation of the industry, first in the US in the 1970s and then in Canada with the National Transportation Act in 1985.

“Overnight, there was all of a sudden new competition,” he said. “So I think there were a lot of challenges, which are still there today.”

With years of diverse work experience under his belt, Jim felt comfortable working for Kelsey Trail Trucking in the early ‘90s.

“When I was younger, I sort of filled in a lot for staff holidays,” Jim explained. “If a dispatcher was on holidays, I’d cover for a couple of weeks, or a mechanic, or a driver. I was pretty fortunate to get that experience to learn a lot about how the whole company worked, from invoicing, to dispatching, to sales.”

With most of Kelsey Trail’s business in Ontario, this was when the company began looking into where it could establish a terminal in the Greater Toronto Area (GTA) as a way of alleviating some of the issues attached to hauling large, heavy loads across various provincial borders, and in 2001, it opened a location in Innisfil, Ont.

In the past year, however, like many companies in Canada, particularly in the west, Alberta’s economic downturn has reared its ugly head at Kelsey Trail.

“We have a group of eight to 10 customers that we haul most of their product from steel mills and fabricating places in Greater Toronto to Alberta, and have done so for close to 20 years,” Jim said. “Historically, if we bring 10 loads out of the GTA for Western Canada, six-and-a-half of them go to Alberta. Out of that 65%, the numbers are down 35%.”

The company has been able to counteract some of that loss by delivering to other locations in Western Canada, but the negative effect the Alberta economy has had remains palpable.

“We’re pretty well established with a pretty big customer base,” Jim said, “and we can make adjustments, but it’s down significantly…and the rates are down with it. (Alberta) has affected us, but we’re doing fine; we’re not struggling at all, but we’re doing different stuff, like regional trucking around Ontario and Quebec and moving more product between Saskatchewan and Vancouver than we did previously.”

Over the past year, Jim said he has been able to keep the company’s fleet new and reliable, which has helped from an emissions-cutting standpoint and has kept Kelsey Trail ahead of the environmental curve.

Jim did say, however, that he has some concerns when it comes to emissions standards, citing the fact that the people who set the regulations are not the ones responsible for footing the bill to make those goals a reality.

Jim said that although today’s advanced engines do run more efficiently, that does come at a cost, with a price tag that has doubled and breakdowns that can prove problematic with costly aftertreatments.

Jim also said that the trucking industry has been held to a high standard for some time now when it comes to curbing emissions, and that others have lagged behind, pointing to construction equipment, which he said was just raised to Tier 4 standards last year, leaving that sector five years behind where the trucking industry is today.

Jim said he would love to see provincial trucking associations and the Canadian Trucking Alliance lobby more effectively for the issues that truly matter to small businesses like Kelsey Trail Trucking, adding that he respects and appreciates those who volunteer to be part of the association boards and would never criticize anyone who puts in the time to help the industry.

In the midst of the present economic downturn, Kelsey Trail can proudly say that it has not had to let any of its staff go.

“We’ve been able to go through our 35-year-old Rolodex of customers and find out where we can put some of our equipment to work,” Jim said. “We haven’t had to downsize or disperse equipment, lay anybody off or anything like that, and that in and of itself is a victory.”

But it hasn’t been easy, and Jim admits that there has been times where he had to entertain the idea of how to best move the company forward.

“It’s so hard to find good people,” he said, “and those who have been with us for three, four, five and six years, I feel like we owe it to them, and maybe we have to haul for a little bit less, but it’s a two-way street – they’re there for us, and we need to be there for them.”

Finding new drivers who are willing to call the road their home for lengthy hauls is no easy task.

“Ours has to be one of the toughest jobs out there,” Jim said. “Long-haul Super-B flatdeck – the guys are not home very much.”

On the road 25 days and home only a handful of times each month, Jim said he has had to bring several temporary foreign workers on-board over the years, and that when it comes to hiring, he gets more inquires than genuine applications these days.

“After they educate themselves about what our job all entails, the inquiries don’t really turn into applications,” said Jim. “Everybody wants to home every night, but our country is too big.”

Jim said he believes the driver shortage is getting worse, not better, and the fact that truck driving is not seen as a skilled trade by the federal government doesn’t help the matter.

With about 84 drivers presently at its disposal, Kelsey Trail is currently looking to add around four more to its roster.

“We’ve been around a while, and with our market, it’s a tougher sector of the industry, but I think the people who do it, they do it well,” Jim said. “The last 18 months has been as tough as I’ve seen it in my 20 years here, so I think there’s a lot of people out there who need a pat on the back…we’re all in it together, and at the end of the day, we’re all going to learn from it, as well.”