TUKTOYAKTUK, N.W.T.  — A new highway in Canada’s north is expected to have a positive economic impact on the region, including the trucking industry that services the area.

The gravel, all-weather highway is located primarily within the Inuvialuit Settlement Region and stretches 138km, linking the communities of Inuvik and Tuktoyaktuk. 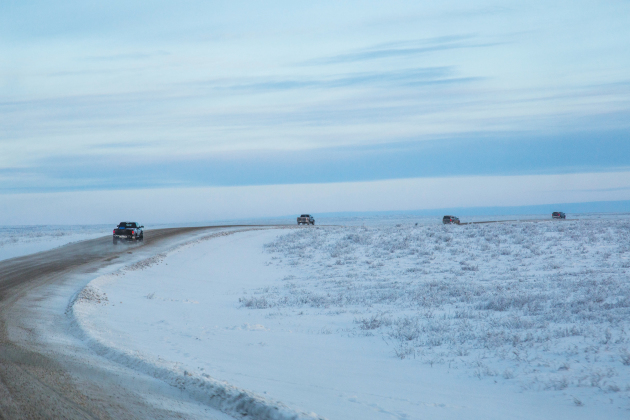 Greg Hanna, communications coordinator for the N.W.T.’s department of transportation, said the new highway means more steady movement of goods into the region.

“Canada’s first highway to the Arctic Ocean connects the Hamlet of Tuktoyaktuk to the territorial all-season highway system,” Hanna said. “Previously, goods could only be trucked in during certain months of the winter when the ice road was open. This new highway allows for the movement of goods year-round, while allowing for new economic opportunities.”

According to the “Inuvik to Tuktoyaktuk: All-Weather Road Economic Analysis,” the new highway will reduce transportation costs with the move from air to truck transport by $456,000. The reduction in costs will lower the cost of food in Tuktoyaktuk, which will increase the standard of living for residents and enable the savings in transportation costs to be redirected to other goods and services, also benefitting residents.

The highway essentially allows for the elimination of the food mail program, which subsidizes the shipping costs of nutritious food by air to approximately 135 northern communities that have limited access by road.

The economic analysis concludes that the termination of the food mail program in the region would have a negative impact on flights and a slight impact on the local trucking industry, with the net impact a $500,000 reduction in transportation industry revenues.

The report does state, however, that the majority of Tuktoyaktuk residents would choose to drive to Inuvik in order to do their shopping, which would lessen the impact from additional trucking in the area. Less-costly goods, as well as cheaper services, such as dental care and restaurant food, would continue to be a benefit to the area.

It is estimated that there are at least 400 pieces of food mail sent to Tuktoyaktuk each month for a minimum of 4,800 per year, or approximately 160,000lbs. of food. Transport costs by plane between Inuvik and Tuktoyaktuk are $3/lb., resulting in an estimated $480,000 in food mail costs. The new highway allows these goods to be transported by truck at a reduced cost of $0.15/lb., which will bring an addition $24,000 of revenue to the local trucking industry.

Hanna underscored additional benefits the new highway has brought to the area and its residents, including training opportunities.

“Examples include training for Class 1 and Class 3 drivers, equipment operators, summer students, and apprentices,” he said. “Not only was construction of the highway an economic boon to the region, we also expect long-term employment opportunities for residents.”

One of those expected long-term employment opportunities is in the oil and gas sector.

Hanna said the Inuvialuit Regional Corporation is currently seeking federal funding to study the possibility of developing gas fields along the new highway.

Overall, there were four economic impacts assessed with the construction of the year-round highway: building and maintaining the road; an increase in tourism; a reduction in the cost of living; and potential impacts on the Mackenzie Gas Pipeline, including natural gas exploration and development in the
Delta Region.