Trucker’s vigil comes to an end

April 1, 2000
SUDBURY, Ont. - Dennis Cleary's 1999 Century Class became a fixture on the shoulder of Hwy. 69 as he protested the high fuel costs that were putting him out of business. Now they have.His truck is bei... 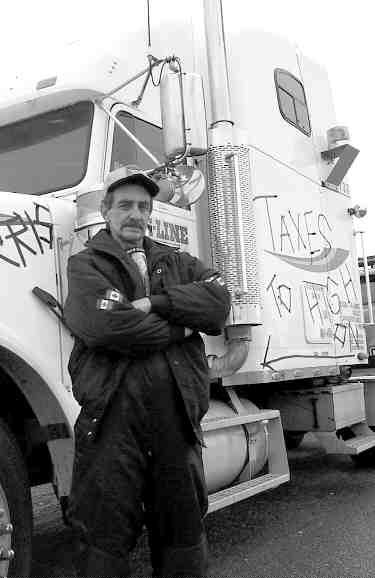 (Photo by the Sudbury Star)

SUDBURY, Ont. – Dennis Cleary’s 1999 Century Class became a fixture on the shoulder of Hwy. 69 as he protested the high fuel costs that were putting him out of business. Now they have.

His truck is being put up for sale at Northline Truck Sales, in a race to see if it’s sold before it’s repossessed. That, Cleary says, could happen in about 1-1/2 months if there is no buyer.

The move ends a two-decade-long career as an owner/operator. And it means his sixth truck will be his last.

“I don’t see a future in it,” he says of life as an owner/operator, adding that he still hopes to secure a job as a company driver. (That job search began last month.) “I can already feel the weight coming off my shoulders. I feel great.”

Cleary parked his truck on Feb. 21 after he discovered that he was left with only $200 after clearing expenses. “Something snapped in my head,” he says.

At times, dozens of trucks would stop to join him near the exit of Pioneer Road, or in convoys that snaked their way through the community.

Cleary lost $8,000 in potential revenue during the three-week campaign, but he still plans to continue his fight for the rights of truckers as the northern Ontario representative for the fledgling National Truckers Association.

The fight goes beyond the signs on his truck that proclaimed “(Ontario Premier Mike) Harris can cut taxes on fuel” and “Help fight high taxes”, he adds. Cleary has already met with INCO, to tell the mining giant how some carriers were not passing fuel surcharges on to their owner/operators.

“They were paying the surcharge in good faith and carriers weren’t passing it on,” he says of the meeting on March 13. “I made them aware of what happened. And it meant $730 for the year for one guy.”

Other truckers aren’t as lucky, he says, referring to a friend who is fighting off the bank in a desperate bid to keep his house. But Cleary wants to end CB chatter that suggests his truck has been repossessed. That hasn’t happened … yet. n