Trucks for Change, the organization that matches up carriers with available capacity with charities needing free or inexpensive transportation of donated goods, continues to grow and to make a huge contribution to Canadian charities.

There are now 70 carriers that belong to the organization and donate their services. So far, they have collectively transported more than 12 million pounds of donated goods. As if that’s not enough, they’ve also chipped in more than $200,000 in in-kind donations.

Pete Dalmazzi, the brainchild behind Trucks for Change, hosted a member reception the other night, during which he thanked everyone for participating. Usually, he pointed out, the trucks used to carry donated goods don’t have to stray far from their intended route, which makes joining a no-brainer for carriers that often have excess capacity.

One of the benefactors is the Daily Bread Food Bank in Toronto.

“We deliver food in five trucks with five drivers all in the Toronto core,” explained Gail Nyberg, executive director of the food bank. “So it gets complicated. Our drivers are busy doing the work, so when we have a really special event, we have to call Pete. We have to call on you to help us because we only have five trucks and five drivers. Once we had to do 700 pickups in three days. We can’t do that with five trucks. But you helped us do that. And so I want to thank you. You are helping the most unfortunate in this city and we count on you to help us.”

The reception was followed by a sorting challenge, which pitted seven teams from the trucking industry against each other in a competition to see who could sort the most donated food. The fast-paced event saw the seven teams sort more than 22,000 lbs in just 90 minutes. (I had to appreciate the brilliance of the organizers – not only did we do their work, we had to pay for the privilege! But it was all for a good cause).

Team Newcom won the event, sorting nearly 48 lbs per minute. They did this in spite of me – I’m sure I slowed them down at least a little!

Fellow Team Newcom member Sonia Straface filed this full report following the event. Trucks for Change is a great organization with which to get involved. And for an industry that gets beaten up more than it gets applauded, initiatives like this one can only help improve its image. 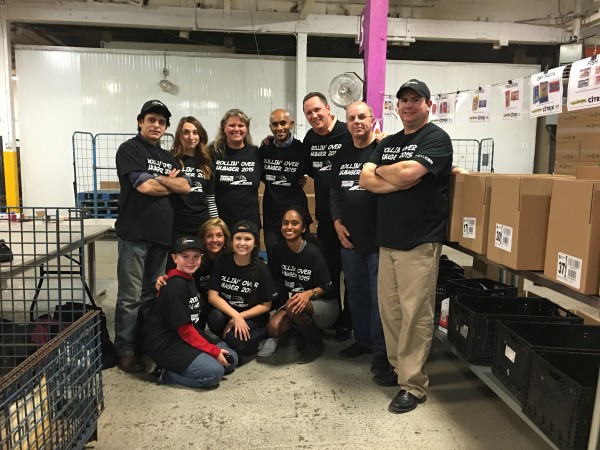