SEBRINGVILLE, Ont. — The incentives for drivers to up and leave their current company are endless.

With the driver shortage in full swing, many drivers ditch their current positions for an attractive signing bonus, a position closer to home, or a dedicated, scheduled route. Not to mention the “grass is greener” notion. 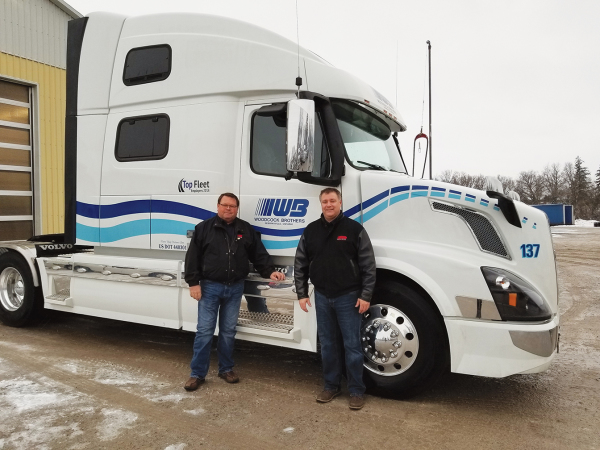 So, it’s no wonder driver turnover is so high (averaging in the high 80-90% range) in North America.

But somehow, for trucking company Woodcock Brothers, hitting even double digits when it comes to turnover is a far cry from where it is now.

The company was first started under the name Merchants Delivery in 1973 by Bob Woodcock and his son, Lorrie. It mostly did local delivery work. Then, 10 years later, Brad Woodcock, Bob’s other son, purchased his father’s shares and renamed the business. At that time, the business operations were still being run by Lorrie, while Brad, a licensed mechanic, fixed up the six van trucks it had.

In 1985 the brothers entered the LTL service world and delivered from Stratford to Toronto, and shortly thereafter, opened a moving and storage division. In 1989, it entered the truckload marketplace.

Lorrie and Brad ran the business together until 2004, when Brad purchased his brother’s shares. He was the sole owner until 2017, when Jeff Pauli, the company’s current CEO, purchased a minority stake.

Today, the business is running smoothly. It boasts 55 company trucks, 15 owner-operators, and 125 trailers. It has one main facility in Sebringville, Ont., and mostly hauls raw materials like steel, aluminum, concrete, and salt, both across Canada and the U.S.

The business has won numerous awards, including the coveted Trucking HR Canada Top Fleet Employers recognition, and it’s not hard to see why. Its turnover rate is the stuff some fleets can only dream about and management works hard to make sure each and every employee and driver is cared for and listened to.

“Our driver turnover is pretty low,” Pauli said. “It’s under 10%, which is tremendous, we think. We have a lot of long-term drivers here, so we find that if we can get them through the door, and they stay for six months, they generally stay for their career.”

Pauli said he believes that employees at Woodcock are content working there for a number of reasons.

“Each one of our drivers gets top benefits, semi-annual bonuses, and every five years they get service awards,” he said. “The pay is also competitive and fair and helps with our retention.”

Other than its pay packages, Brad added that he’s heard feedback from drivers that they stay on with the business because of the equipment and culture at Woodcock Brothers.

“Our equipment is all fairly new,” Woodcock said. “Our longhaul trucks are less than four years old. Drivers also like that they are assigned a truck, and we don’t slipseat.”

As an added bonus, all the Woodcock trucks are spec’d out to the max.

“Each truck comes fully equipped with refrigerators, converters, auxiliary heating and cooling,” Woodcock listed. “They are all loaded with all options. We have all safety options on, which is very important to us. Our trucks come with collision avoidance, lane departure systems, rollover systems. We have dash cams and side cameras, top of the line stereo systems with Sirius XM radio built in. We have disc brakes – these trucks really have everything the driver could want.”

Woodcock added that a vast majority of his trucks are Volvos, because that’s what his drivers like.

“The drivers really like the Volvos,” he said. “I hear from my drivers all the time who say ‘The guy who designed the interior of a Volvo must have been a former truck driver.’ They love that everything, the switches and cubby holes, are all in the right place and where they should be.”

And on top of that, Woodcock dispatchers know the life of a driver isn’t easy, so they are known to offer one of the most flexible work environments a driver could hope for.

“Our dispatchers are very accommodating to our drivers’ wishes,” Pauli said. “Some guys like to be home every other night and we will accommodate them as best we can, and that bodes well with the drivers. We are not forced dispatch. Our dispatchers work with them so they can be home when they want to be home.”

Woodcock added: “90% of the time our driver leaves the yard, he knows when he will be back home. We really take the guesswork out of longhaul driving for them.”

Despite all of the positives, Woodcock said the business is still affected by the driver shortage, and that he turns away loads all the time because there aren’t enough seated trucks in his operation.

“Right now, we only have a couple of empty trucks,” he said. “So, I think we’re fairly lucky.”

To help bolster its recruitment efforts, Woodcock Brothers relies heavily on its current driving staff who talk to others on the road about the advantages of driving for
the company.

“Our drivers are the best recruiters out there,” Woodcock said. “They’re always chatting with other drivers when they’re out on the road and will refer some guys to us. Of course, they get paid a bonus if we hire one of their referrals.”

In addition, the company is active in job fairs and believes the key to solving the driver shortage is to recruit young people into the industry.

“We have a job fair with local high schools next week, and we’re hoping to get the kids interested in any type of job in transportation, whether it be driving, dispatching, or anything else,” Pauli said.

In the future, Woodcock said he hopes to have the same success he’s had over the last 35 years with the business.

“I really want to continue to have this great family atmosphere here, where no driver or employee is a number and we know everyone by name,” he said. “It would be nice to add maybe 10-15 trucks in the near future. Where I see the business in the future is growing slowly, with good customers and great personnel.”