LANGLEY, B.C. — A new era for the British Columbia Trucking Association (BCTA) began at the start of the new year with the departure of former president and CEO Louise Yako and Dave Earle taking the helm.

Most recently, Earle comes from a construction background, having served as the vice-president of government relations and HR services for the Construction Labour Relations Association of B.C. He has also worked as an advisor, manager, and executive director with the provincial Ministry of Labour’s employers’ advisor’s office. 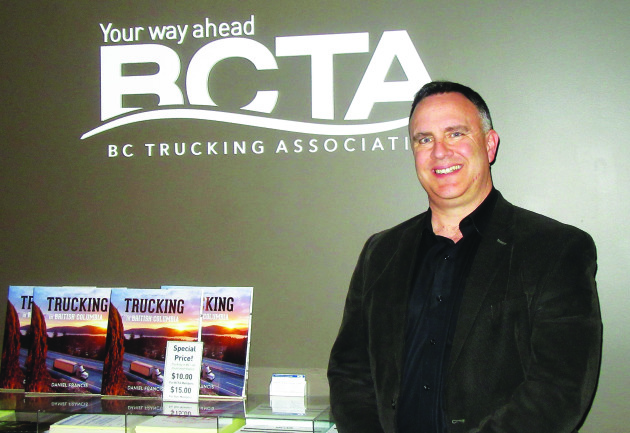 Earle also has some practical experience behind the wheel, having spent parts of his summers years ago operating a dump truck on mill property and a five-ton in downtown Vancouver for a local courier company.

Earle said he understands the industry has changed since his time as a driver and that it’s his 20 years of advocacy and policy experience that provides him with the grounding for success as the BCTA’s president and CEO.

Association board chairman Trevor Sawkins is confident in Earle’s ability, saying after the announcement of his hiring in December 2017, “The search committee and the board are confident Dave has the skills, experience, knowledge, personal network and, most importantly, interest and enthusiasm to learn about our industry and our association to help guide us to the next level.”

Earle sat down to answer some questions for Truck West, addressing where he’d like to see the association go in his freshman year and beyond.

TW: If you had a priority list for your first year as president and CEO of the BCTA, what would your Top 3 initiatives be and why?

Earle: Developing organizational capacity, re-defining the value of association membership, and developing strategies to address the ongoing demographic shift.
Top of my list has always been developing capacity, as the success of any organization is based on its people. Ensuring that everyone at BCTA continues to have the opportunity to learn, grow, and succeed will ensure the continued success of the association.

Re-defining the value of association membership is necessary to ensure that BCTA continues to meet the needs of its current members and successfully engages new organizations. Unless we continually evaluate and adapt, we won’t understand or be able to provide the services our members require.

Like all industries, our industry has a significant shortage of skilled workers. We need to ensure that BCTA members can continue to access the opportunities our growing economy is providing in an era when there are simply fewer and fewer people available to do the work.

TW: The South Asian community makes up a significant portion of the industry, particularly in B.C.’s Lower Mainland. Is it important for the BCTA to grow its relationship with that community, and if so, how do you plan on doing that?

Earle: It’s very important to ensure that BCTA is engaging all elements of our industry, including the South Asian community throughout B.C. Often when organizations seek to engage a specific community of interest, strategies fail to recognize that no community is homogenous. Demonstrating the value of association membership has to be done at the individual company level, as each prospective and current member must be able to clearly see the benefits of membership. It’s a process of engaging and demonstrating the value BCTA provides to its members.

While illustrating the value proposition and respecting individuality, it is critical to understand the characteristics and history that shape any community. We’ve been working to create opportunities to engage members of the South Asian community and have laid a foundation to continue to develop relationships. Going forward, we will be developing opportunities to meet with operators both individually and at community events to demonstrate the value of BCTA membership.

TW: Staying on the topic of diversity in the industry: the lack of women and visible minorities in trucking has been widely discussed over the last few years. Is diversity an issue that is on your radar and what role does the BCTA play in such an effort?

Earle: I do come from an HR background and the literature there consistently informs us that diverse organizations are more successful at every level and with every metric. I believe BCTA can play a role in creating space for conversation and facilitating initiatives to address this issue. As an industry, we need to engage members of those communities to listen and learn from their experiences and to reach out to other industries who have enjoyed success developing representative workforces.

TW: What do you see as being your biggest challenge in this new role in the coming year/years, and how will you overcome that challenge?

Earle: Certainly understanding the unique aspects of BCTA members’ operations and their effect on business success. For example, recruitment and retention of drivers is a key concern for many members. In most sectors there are colleagues present and a layer of immediate supervision available to front line staff. That’s not the case in our industry. Drivers, by definition, work alone or in isolation for much of their careers. What impact does this have on recruitment/retention? Are there opportunities/strategies to mitigate negative aspects of this reality?

The challenge to learn and understand these issues is what fundamentally attracted me to the role. I am a lifelong learner and consistently intrigued by the creativity, adaptability, and innovation that businesses in all industries demonstrate. I don’t intend to overcome that challenge but rather embrace the uncertainty and learn from those around me.

TW: In what ways has Louise Yako helped during your transition to BCTA president and CEO?

Earle: I first met Louise when I was working with the provincial Ministry of Labour in the late 1990s, and she was relatively new to the BCTA. She was a remarkably kind and generous person then and remained so as our paths intersected on a variety of issues over the years. We met and spoke many times before I assumed this role, and Louise provided background, history, and context to the work of the association. I also have her to thank for the outstanding team she has assembled at BCTA. Success is always the result of people working together, and I am so excited to begin to work with the staff at BCTA.

TW: How do you think you’ll be different from Louise in your approach to your new role?

Earle: At our annual Christmas dinner, Louise did remark that her feet were not likely as big as mine but despite that, I do have rather large shoes to fill. I admire Louise’s thoughtful, contemplative approach to issues and do not intend to deviate from that path. I am an inherently outgoing and extremely curious person, but my focus remains on serving our members’ interests. My approach (and I expect Louise’s, had she remained in the role) will change and evolve over time. I’m sure it would be different, but how, remains unwritten.