January 1, 2000
OTTAWA, Ont. - It will be almost another year before North America has a common set of guidelines to tie down and secure loads on trailers, wrapping up a five-year process."November 2000 is the revise... 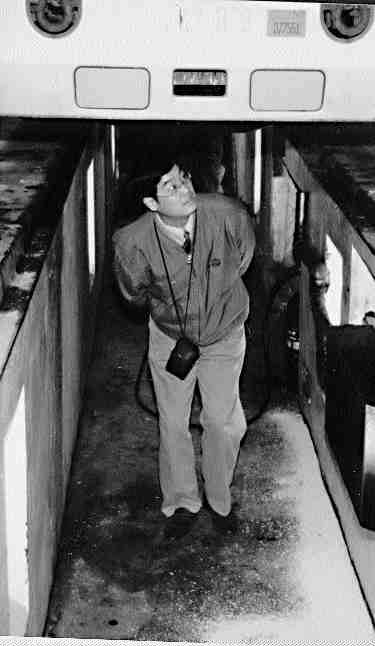 ON TOUR: Officials from Chinese fleets were touring facilities of such carriers as MacKinnon Tranport last month as part of a Canadian International Development Agency (CIDA) initiative. While at the Guelph, Ont. site to learn the way a Canadian carrier operates, one of the things that facinated them most was the absorbant commonly used to soak up oil spills from shop floors. One delegate noted that Canada regulates its industry more than China. (Photo by John G. Smith)

OTTAWA, Ont. – It will be almost another year before North America has a common set of guidelines to tie down and secure loads on trailers, wrapping up a five-year process.

“November 2000 is the revised date,” confirms Sean McAlister of the Canadian Council of Motor Transport Administrators.

The final rules are expected to offer much more concise guidelines about securing different types of loads, from coils of steel to dressed lumber. Different styles of tie-downs and anchor points will also be rated.

The U.S. is expected to take one of the final steps in the process by handing down a Notice of Proposed Rule Making in the next few months, and from there stakeholders are expected to have about 90 days to comment on proposals that have already been redrafted four times.

“The whole thing got put on the back burner,” says Evan MacKinnon of MacKinnon Transport, who represented the Canadian Trucking Alliance during discussions.

Many U.S. resources have been tied up in creating a new motor carrier administration, similar to the Federal Aviation Administration that governs airlines.

But when the tie-down rules are finalized, MacKinnon expects good news. The proposed standards, which are now in their fourth draft, have changed significantly over the past few years. Specifically, he refers to the number of tie-downs that would initially have been required for various weights.

Even the most recent draft, issued in May, removed a requirement on chain tie-downs for covered lumber, and eliminated a requirement to block machinery from rolling forward.

“Some will require more chains here or there. I can live with a couple of extra,” MacKinnon says. “There’s going to be some people who aren’t happy, but maybe they should look at the things they’re doing now.”

At this point, Canadian jurisdictions are considering whether to simply refer to the final standard in their regulations. That way an update to one would update them all.

Ultimately, the hope is to have as many jurisdictions as possible adopt the standards.

Meanwhile, both countries are looking to collect about US $200,000 to train the trucking industry about the new standards. At the moment, about half the money is expected to come from government, while the other half will come from manufacturers and other trucking interests.

Details about the latest draft of the standards can be found on the Internet at www.ab.org/ccmta/ Model.htm.