James here. There’s one thing I can’t neglect to write about in this week’s Hooked Up, and that is ZF’s recent demonstration of technological capabilities. The company hosted about 150 truck writers at a track near Aachen Germany earlier this month, where it showcased a number of new and future technologies.

The most exciting of them was its Innovation Truck, which can be maneuvered at low speeds or backed into position from outside the vehicle using only a tablet and a specially designed app. Unbelievable stuff. This was so simple, I swear my four-year-old could back that double-trailer configuration up to the dock, guiding it into place using only her finger.

ZF’s approach to autonomously-driven vehicles is different from Daimler’s which I wrote about last time out. ZF acknowledges it’ll be some time before the legislative framework is in place to allow autonomously-driven trucks to be operated on public roadways. So it developed a system that could theoretically be used today in yards and terminals and other private, unregulated environments. 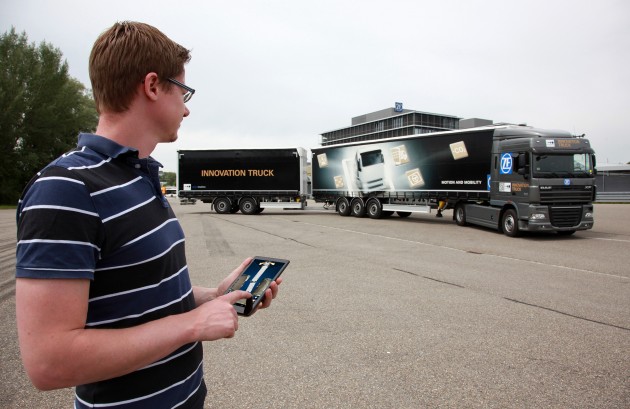 There are practical applications for this. For starters, how about the ports, where drivers complain they often have to wait hours to be loaded. A driver could drop his can at the yard and hop into an already-loaded truck, leaving his empty unit behind. It could be maneuvered through the container yard by dockworkers using a tablet and when the driver returned later with another load he could pick up the unit he left behind.

But more importantly, this technology can make the industry more attractive to the next-gen trucker. Let’s face it, kids today are born with iPads in their hands. This stuff is cool to them. It’s cool to me. As I contend in this blog, technology is making trucking cool again. The industry has had decades to sort out its people problems and has failed miserably. Technology may be about to save trucking from itself.

And now for the TraXon transmission, a slick, modular, automated transmission that I have a hunch we may see on these shores. The transmission will be offered in certain markets beginning next year and a 12-volt version is in development, hinting of possible availability here as well. It features integrated GPS which can read the road topography ahead and avoid unnecessary shifts.

A dual clutch version allows for seamless powershifting, providing a car-like feel and greater efficiency since torque is not interrupted between shifts. And a hybrid version can operate noiselessly and emissionslessly.

Very cool stuff, all of it. You can read my full report here.