May 4, 2016
Area highways restricted to emergency use only

FORT MCMURRAY, Alta. – A wildfire has forced the mandatory evacuation of Fort McMurray, Alta. residents, which has caused several challenging issues on surrounding highways, including northbound Highway 63 and Highway 881 being closed with the exception of emergency vehicles.

Alberta Transportation has indicated that Highway 63 south of Fort McMurray is currently experiencing reduced visibility due to smoke, fire hazards and extreme traffic congestion, resulting in delays of over six hours. The highway is closed at the MacKenzie Blvd. intersection.

Motorists could be found stranded on Highway 63 having run out of gas, and were met by a fuel tanker escorted by Alberta Transportation in an effort to keep vehicles moving.

The wildfire ignited May 1, and the north edge of the fire grew rapidly and breached the city boundary. The city’s mandatory wildfire evacuation is the largest ever in Alberta.

Downtown Fort McMurray residents are being asked to evacuate to the reception centre at MacDonald Island at 1 C.A. Knight Way. Those from Beaconhill, Gregorie and Centennial Park should go to Noralta Lodge, 21 km north of the city across from the Suncor overpass.

The Gear Centre, a truck accessory shop with a facility in Fort McMurray, said on its Facebook page that they had been evacuated due to the fire, and directed followers to the Canadian Red Cross website to help the thousands in need of assistance.

“Our thoughts & prayers are with our Fort McMurray employees and residents. To help out, you can donate to http://www.redcross.ca/ ‪#‎ymmfire‬,” read the Gear Centre post. 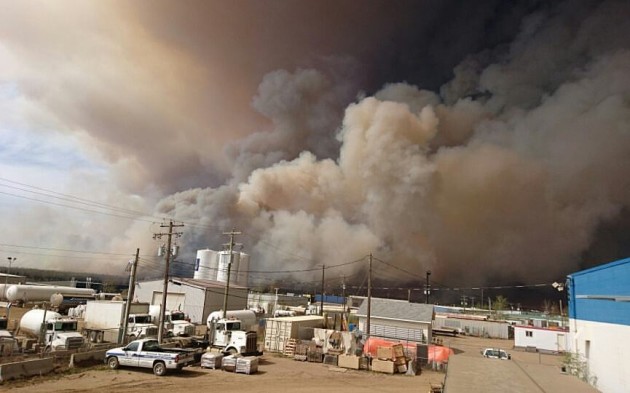