HOPE, B.C. – The B.C. Trucking Association (BCTA) says the move to prohibit commercial trucks from the left lane on Snowshed Hill on the Coquihalla does not address the main cause of collisions on the mountain pass.

Though recognizing the pilot project as a creditable effort to improve safety and aid with traffic flow, BCTA president and CEO Dave Earle told Truck West the focus needs to be on chaining up.

“While the intent to maintain a clear path in the left lane is laudable, this pilot does not address the primary cause of highway closures during severely inclement weather, which is the failure of some drivers to chain up,” said Earle. “Unless this pilot is accompanied by significant regulatory change and increased enforcement, we are concerned that all the pilot may do is ensure it is only commercial vehicles trapped behind those few drivers who refuse to comply with the law.”

B.C.’s Ministry of Transportation and Infrastructure made the announcement this week that commercial trucks would not be permitted to use the left lane on Snowshed Hill between Box Canyon and Zopkios during the pilot. Other routes in the interior of the province could also see the same measures put in place. 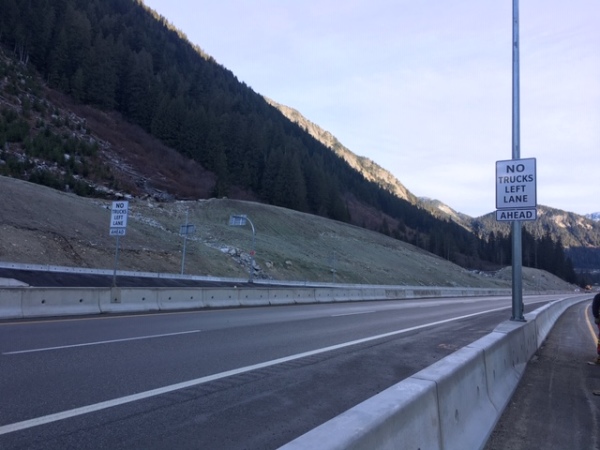 For now, the focus is being put on Snowshed Hill because the government indicated that B.C.’s Commercial Vehicle Safety Enforcement places a large part of its efforts into this location during the winter months when inclement weather can wreak havoc.

“By restricting trucks from the left lane, we will be better able to maintain traffic flow (including emergency vehicles) and plowing operations, as well as significantly reduce the time it takes to re-establish the flow of traffic after a vehicle incident/closure,” the ministry’s statement said.

To help address the issue of drivers chaining up, the new Box Canyon chain-up area is now open, which is located on the Coquihalla Highway before Snowshed Hill.

“We’re expecting commercial vehicles to use this facility when snow falls on the Coquihalla, in advance of heading over the summit,” the government stated.

The location can hold up to 70 commercial vehicles at one time and can accommodate oversized loads.

Earle pointed out that it is not uncommon to find sections of highway in North America where commercial vehicles are not permitted in the left-most lane. He added that it is the BCTA’s and its members’ primary concern to ensure the safety of commercial drivers and the motoring public.

“This pilot is intended to address safety and efficiency on one of the most difficult mountain passes in B.C., and is welcome,” said Earle. “It should assist in clearing blocked vehicles and should mitigate disruptions to light vehicles.” 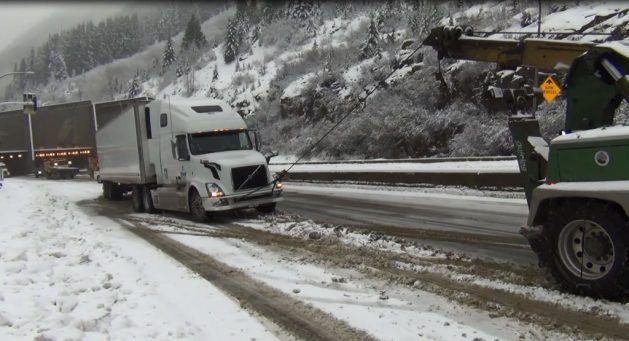