BRANTFORD, Ont. – It was Ontario’s turn to host the National Professional Truck Driving Championships (NPTDC) this year and competitors from the province really brought their A-game.

The NPTDC was held at Brantford’s Municipal Airport this weekend, and drivers from Team Ontario not only took home the Team Award, but competitors placed in all but one category of the day. The grand champion was also from Ontario. 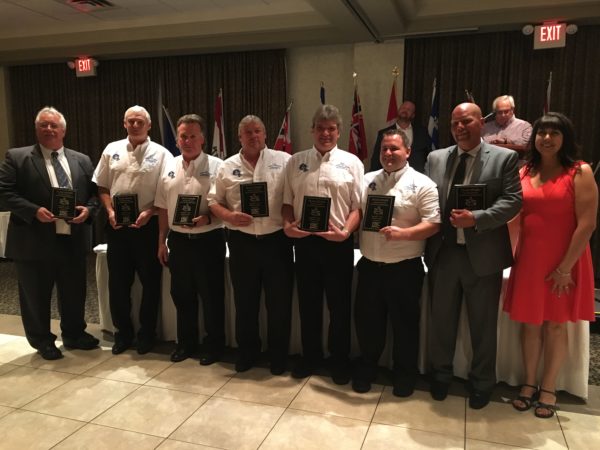 Like the other championships, competitors had to compete and place regionally and provincially to make it to the National level. On Friday, September 16, all 29 competing drivers wrote a 50-question exam about trucking safety and knowledge and then completed a pre-trip inspection of a tractor-trailer where they had to identify five defects in eight minutes while an MTO officer looked over their shoulder.

For most, the most nerve-racking part of the competition took place on Saturday – the driving course – where drivers had to weave their truck around a tight course through a series of obstacles like a serpentine  and reverse into a simulated alley dock. Each cone knocked over, or scraped, meant deductions. And this year, things on the course got a bit more challenging as drivers were faced with torrential rain all day. Thankfully, the rain didn’t dampen anyone’s spirits as the cheers and shouts of encouragement were still heard from the sidelines.

The scores from all three portions of the competition were added up and the top three winners from each of the five truck classes (straight truck, single-single, single-tandem, tandem-tandem and b-train) were recognized with awards on Saturday night. Awards were also given out to Rookie of the Year, Grand Champion and best overall team.

“I’m very surprised,” said Ontario’s Bryon Winfield of Home Hardware after winning the award for Grand Champion – reserved for the driver who wins his/her category by the largest margin. “I really didn’t think I had a good run today because the rain really threw me off but I guess I did better than I thought.”

Winfield was one of two competitors who got a perfect pre-trip score (the other was his Ontario teammate and Home Hardware colleague, Shawn Matheson). He also placed first in the single-tandem category.

“It’s a great feeling to win in Ontario, for Ontario. Especially that we got the Team Award,” he added.

And though winning was a great accomplishment for Team Ontario, Jim Scott, Ontario’s team representative said his favorite part about the day was watching how professional the drivers at this level of competition are.

“Personally, my favorite part is watching these drivers after already winning in the provincials, come out and compete. It’s also so great to see the camaraderie in the Nationals and the degree of professionalism and how at the end of the day they can all shake hands,” he said. 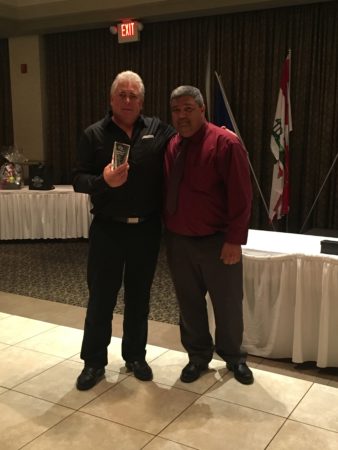 Rookie of the year, Robert Smith of Alberta (left).

The Nationals weren’t just a special event for Ontario. It was special for Alberta’s Robert Smith as well. After competing in the provincials for more than 25 years and never making it to Nationals, the Tim Hortons driver not only placed first in the B-Train category, but won Rookie of the Year.

“It feels awesome to be Rookie of the Year,” Smith said after getting the award. “I wasn’t expecting it but I was hoping for it. I’ve been in the provincials since ‘89 and this is my first time in Nationals so I didn’t know what to expect really.”

Smith said he felt great about his run after as soon as he climbed out of the truck calling it his “best run ever.”

To prepare, Smith said he didn’t practice he just got in the zone and tried his best to complete the course.

“It feels great to make Alberta proud,” he added. “It really is a dream come true. To not only win first place in my category, but to win Rookie of the Year…you can only do that once.”

Don Achtenichuk, Alberta’s team representative added how much Alberta drivers look forward to the championships by making sure they don’t have any accidents on their record all year round. To be eligible to compete at any level, drivers must be accident-free for 12 months prior to the competition’s start.

“For them, preparing is not having accidents throughout the year. That’s a key part in being eligible to participate in these competitions,” he said. “That’s how these guys get ready. Because they really are the safest guys on the roads…the guys who compete at this level.”

British Columbia’s Evan Hirst, who drives for Canadian Freightways, was also proud to bring home a trophy for his province.

“I was quite shocked with how it went today,” he said after his win. “It was a tough course today and I was pleasantly surprised. I thought the rain had gotten the better of me because I was the last one in the truck and the other guys before me had been driving with the windows down so the seat was soaked by the time I got in there.”

It was Hirst’s eighth time at Nationals. And his fourth Nationals win.

Though the winners are different every year at the NPTDC, the main goal and vision for the event stays the same no matter which province hosts.

Rob Jackson, the president of the Ontario Truck Driving Championships said it was an honor for Ontario to host this year and that across the board, all the provinces that participate in the event know what this event means to the drivers and what it means to the industry.

“It’s amazing what these drivers do and this is our way to give back to them,” he said. “We hear a lot in the media about wheel-offs, accidents involving trucks with fatalities…but this is our way to say thank you to them for being safe because that’s really what this event is all about…safety.”

The full list of winners for the 2016 NPTDC were as follows:

Next year, the Championships are set to be hosted by Manitoba. Keep your eye on www.trucking.mb.ca for updates on the event next year.