The effort was spearheaded by Melanie and Allan Kerpan, the parents of 25-year-old Danille Kerpan, who was killed in an impaired driving collision Oct. 10, 2014.

A photo of Danille will grace 40 truck trailers from Westcan in Saskatchewan, and be accompanied by a message encouraging people to call 911 if they see a driver they suspect to be impaired.

“Thanks to the Kerpans for bravely sharing Danille’s story, and thanks to the dedication and support of RTL-Westcan Group of Companies, thousands of motorists will see this important message daily,” said MADD Canada national president Patricia Hynes-Coates. “This is a poignant symbol of the tragic toll that impaired driving takes on people, families and communities, and serves as a powerful reminder to the public that everyone has the power to prevent impaired driving.”

The decals were unveiled during a special event at Westcan’s Saskatoon terminal May 17.

“RTL-Westcan is honored to have this opportunity to share Danille’s story, and deliver this life-saving sober driving message,” said Grant Mitchell, president and CEO of RTL-Westcan Group of Companies. “Road safety is an integral part of the culture of our organization and this campaign is an important way we can help to make our communities safer and prevent other families from having to endure the devastating consequences of impaired driving.”

Westcan began putting anti-impaired driving decals on its fleet in 2012, the first featuring Mike Knox, a teenager from Alberta who was killed by an impaired driver in 1999. 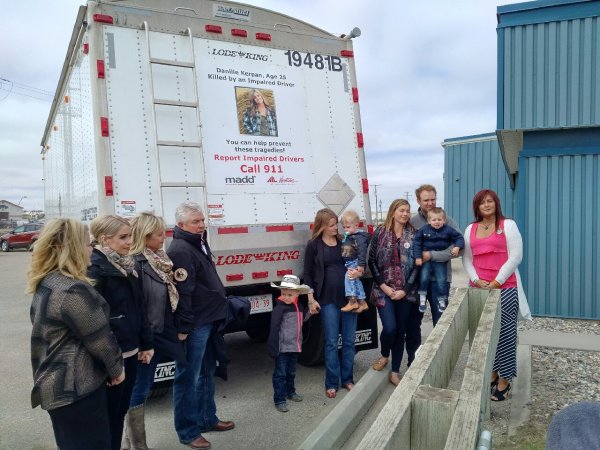