CHARLESTON, S.C. – Today’s grand opening of the new Sprinter plant in North Charleston was met with some added good news for Mercedes-Benz Vans, with Amazon announcing it will require 20,000 units over the course of the coming year.

Mercedes-Benz Vans invited media from Canada, the U.S., and overseas to Charleston, S.C., for a tour of the newly opened manufacturing plant, as well as a test drive of the new Sprinter, which in addition the Mercedes-Benz model is available as a Freightliner brand.

The 2019 VS30 Sprinter will for the first time be built in the U.S. for the North American market, which, as Volker Mornhinweg, head of Mercedes-Benz Vans, pointed out, is the van’s second largest market in the world. Of the approximate 400,000 units the company sold worldwide last year, around 44,000 were destined for the U.S. and Canada.

Mornhinweg said North American demand for the Sprinter was a big factor into why the company chose to call South Carolina home for the new plant.

“Building a full-scale production plant in this market makes perfect sense,” said Mornhinweg during the grand opening ceremony. “With the new, state-of-the-art production site in South Carolina, we will be able to supply our customers in North America even faster and with more flexibility in the future. The new plant in North Charleston combines our global expertise and experience resulting in a state-of-the-art facility in every respect. It is a valuable asset that completes our global production network. Our priority at Mercedes-Benz Vans during the planning process for this facility was maximum flexibility. This enables us to react in an agile and anticipatory manner to current developments and customer desires. Additionally, it guarantees excellent quality within our proven, standardized production system.” 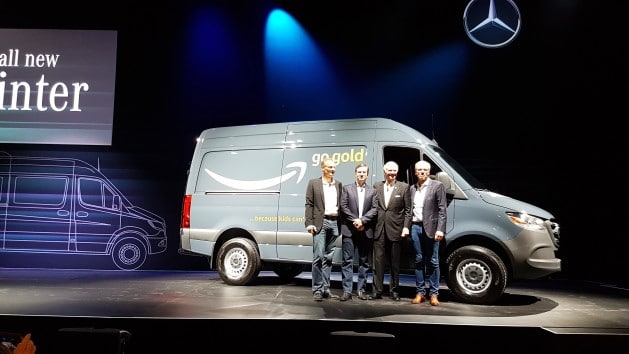 The company invested approximately USD$500 million into building the plant. Currently, more than 900 people are employed at the location, with the number expected to rise to 1,300 by 2020.

Amazon’s need for 20,000 Sprinter vans comes on the heels of the company’s announcement of its new Delivery Service Partner program, where anyone can apply to become an Amazon-branded delivery driver and can lease up to 40 vans to deliver packages from warehouses to homes.

“We’re proud to partner with Mercedes-Benz Vans to contribute to local economies through the order of Amazon branded Sprinter vans produced at their new plant in North Charleston,” said Dave Clark, Amazon’s senior vice-president of worldwide operations. “Thanks to the tremendous response to Amazon’s new Delivery Service Partner program, we are excited to increase our original order of branded Sprinter vans to 20,000 vehicles so new small businesses will have access to a customized fleet to power deliveries of Amazon packages.”

Clark said the program, which was announced last June, is expanding to more U.S. cities, but at this time has not been rolled out in Canada. 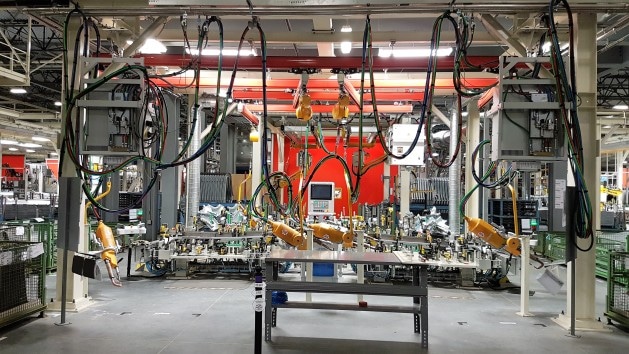 In addition to the gasoline option for 1500 and 2500 cargo, crew, and passenger vans, the 2019 Sprinter offers several new features, including 15 seats for 14 passengers plus the driver, increased GVWR on the 2500 and 4500 models, a seven gear transmission standard on six cylinder diesel models, increased cargo space and usability with loadable wheel arches, interior roof rack, and shelf above roof rim, and the Mercedes-Benz User Experience with optional seven or 10.25” touchscreen multimedia display.

Two years ago, I was in Charleston for the groundbreaking ceremony of the new Sprinter plant. Late last year, I was invited to Germany to learn about what Mercedes-Benz had in store for the 2019 Sprinter. And now, I’ve revisited South Carolina to finally test drive a vehicle the company has been touting for some time.

As you would imagine, driving a Mercedes-Benz vehicle is a joy for someone more used to less costly makes. It is a smooth ride, and a comfortable one at that.

The navigation system – from what I have heard from those who test drove the vehicle in Amsterdam a few months back – has been improved. My drive was just shy of an hour-and-a-half, and the navigation system was responsive and gave fair warning when I needed to make a turn.

The turning radius on the van is impressive, which makes it easier to maneuver around corners and fit into parking spaces.

If I could change something on the 2019 Sprinter, it would be the distance the dashboard gauges are from the driver. I am just over six feet tall and still had to stretch out to reach the onboard display to use the map and adjust the air temperature. I can only imagine for some shorter drivers it would be more of an issue.

The interior also seemed to lack an obvious place to rest your phone while driving. Several vehicles these days have a rubber, no-slip spot on the dash where cellphones can be charged or used as a navigation device, but I found myself just having to toss my phone on the floor beside me or on the passenger’s seat.

On the driving side of things, though the ride was smooth, on two occasions the active lane keeping assist kicked in – and I really don’t think it needed to, as I was well within my lane at all times, but I digress – which felt strange on the steering wheel. The best way to describe it is that it vibrates when activated and made me feel like I had lost traction with the road, which was not to my liking. Almost like driving on icy roads and starting to slip…not fun.

I’m sure this is something you would get used to, however.

Other than that, the new Sprinter really focuses on driver comfort, as well as versatility for various applications. 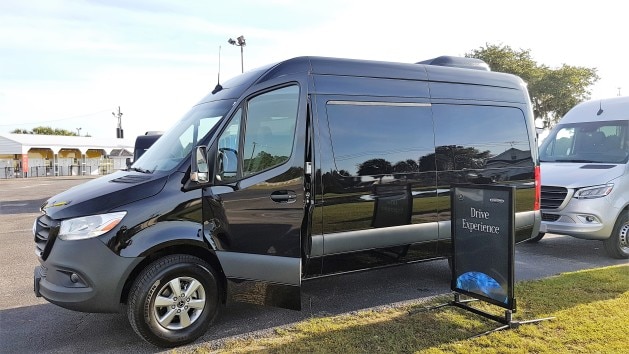 I did not get the chance to drive one of the Freightliner branded models, though several Mercedes-Benz executives say the two are identical and the different brands are more for customers in markets that are more suited for driving a Freightliner compared to a Mercedes-Benz vehicle.

Following the test drive, we were given a safety demo that highlighted three key features – rear cross-traffic assist and distronic cruise control, both optional features, and brake assist, a standard on all new Sprinters.

Distronic cruise control maintains a safe traveling distance from other vehicles while in cruise control – approximately four vehicle lengths during our demo, but depends on speed. This helps take some of the stress away from driving, as the driver will always know the Sprinter will maintain a safe distance from the vehicle in front.

The standard brake assist feature is useful when driving in urban or heavy traffic areas, particularly when a driver is looking for an address or business and may not be paying full attention to the road. The feature will recognize a vehicle in front and brake or stop to avoid a collision.

From a technology standpoint, the Sprinter is fully equipped.

In addition to the features mentioned above, the vehicle boasts assistance with blind spots, parking, traffic signs, crosswind, driver attention, and Internet in the car.

I’m well aware how all of these functions are intended to increase safety, but for me, it does take some getting used to. As I mentioned, the lane keeping assist function felt strange, as did the crosswind assist. Driving over several bridges in the Charleston area, when a crosswind blew, I could feel the Sprinter make a correction. Experienced drivers are used to making these kinds of adjustments on their own, and it is still strange to feel the vehicle do it for you.

But this is the way of the future.