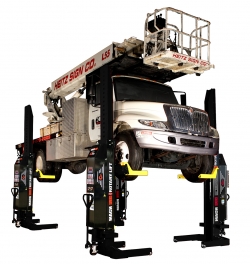 Coming in two-, four-, six- or eight-column configurations, the MCHF14 Flex lift has a capacity of 28,000 pounds per axle and up to 112,000 pounds overall. It can be used to lift most medium- and heavy-duty vehicles.

The new model replaces the MCHF13 Flex, which had been the lowest-capacity lift in Rotary’s Mach Flex powered by RedFire family of remote-controlled lifts.

Using the remote, technicians can control the synchronized mobile columns from anywhere in the service bay, the company notes. Two speeds of vertical moves are controlled with a joystick, while a green LockLight shines at the top of each column when mechanical locks are engaged.