August 1, 2011
QUEENSVILLE, Ont. - The first Canadian Caterpillar CT660 is being put through its paces hauling aggregate to landscapers in the Stouffville, Ont. area by J.F. Kitching & Son, a family-run company that has played a key role in the truck's... 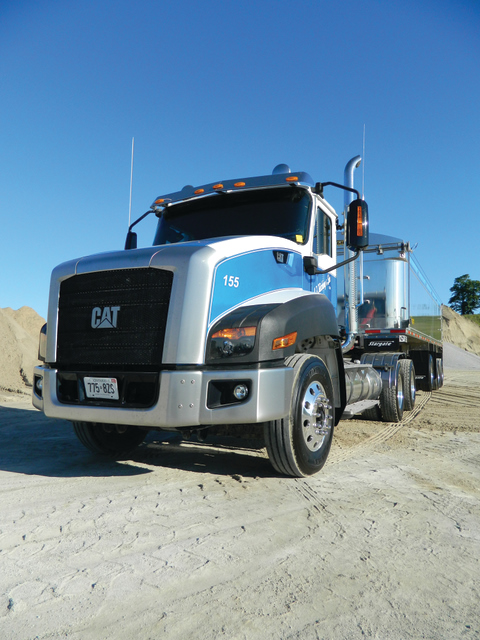 CANADA'S CAT: J.F. Kitching & Son of Queensville, Ont. has been running this Cat CT660 - the first in Canada - all summer. The only drawback, its driver says, is that productivity has been reduced because everyone wants to take a peek inside whenever the truck is stopped. Photo by James Menzies

QUEENSVILLE, Ont. – The first Canadian Caterpillar CT660 is being put through its paces hauling aggregate to landscapers in the Stouffville, Ont. area by J.F. Kitching & Son, a family-run company that has played a key role in the truck’s development.

As a longtime Caterpillar customer, J.F. Kitching & Son was selected by Cat to serve as a test fleet, and to operate what the company calls a “field follow” unit. There were five such units in the States, and Grant Kitching said it was an honour to be selected as the lone Canadian test fleet.

“We were pretty pleased that they chose us to represent them in Canada,” he told Truck News during a recent visit to the company’s facility north of Toronto. “There are a lot bigger fleets and a lot of other fleets across Canada that could have been doing the same thing we’re doing, but they chose us and we were quite pleased to be a part of it.”

J.F. Kitching & Son just took delivery of its CT660 about 30 days ago, but Mike Kitching and longtime mechanic Bruce Daily have been involved in the design process since long before the truck was first unveiled to the public in March.

“I went down to Peoria, Ill. with our mechanic – who’s been with us for 42 years – and we gave our input on some of the designs and modifications they could make on the truck to improve it for the drivers and mechanics,” Mike Kitching recalled.

Suggestions like stainless steel door hinges and the placement of certain controls were adopted by Caterpillar. The company also provided valuable input on preventing corrosion, which is something J.F. Kitching  & Son is no stranger to, as a transporter of road salt in the wintertime.

Ken Robinson was chosen as the dedicated driver of the Cat CT660, because he’s been a longtime employee and has earned the reputation of being a straight shooter.

“He tells it like it is and that’s what you want,” Grant Kitching said.

Robinson was happy to oblige.

“I thought ‘I’ll take it,’ because there are none of them around,” Robinson told me as he geared down and slowly descended into Kitching’s gravel pit, Bachman Turner Overdrive’s ‘Let it Ride’ appropriately playing on the truck’s radio. “I like the big ugly hood (of classic-styled trucks), so it took some getting used to. But the visibility really got me and it’s so driver-friendly. That makes a big difference to me.”

Robinson’s former truck was a Pete 379 and he admitted he’s still warming up to the Cat’s sloped hood. But he does appreciate the visibility and he loves the dash layout.

“All your main gauges are right there,” he said, gesturing to the dash console. “When you’re driving straight down the road, you can see everything – you don’t have to turn your head.”

He loves the fact Caterpillar has combined the speedometer and tach into a single gauge.

“Awesome,” he said when asked about that unique attribute. He also likes the attention the CT660 is getting on the road.
“People are always asking about it,” he said. “Whenever you stop for coffee, they want to look inside it.” He has even seen drivers lower their windows to take pictures of the truck as they passed it on the highway.

Kitching’s Cat CT660 has an 18-speed transmission paired with Cat’s CT13 engine. It can also be spec’d with Caterpillar’s CX31 automatic transmission, but Mike Kitching said the company spec’d an 18-speed manual to allow for more accurate comparisons to existing vehicles in its fleet.

While Robinson cares for the truck as though it’s his own and repairs have not been necessary, Grant Kitching admitted the three-piece bumper and composite plastic fender panels should help lower repair costs.

J.F. Kitching & Son’s CT660 is not yet broken in, but so far Robinson is averaging about 5.5 mpg hauling 37,600 kgs of payload, which is good for the duty cycle, Mike Kitching said. Does that mean the fleet will be ordering a lot more Caterpillars in the future?

“At this stage, we don’t want to commit,” said Grant Kitching. “In all fairness, we’ve had good luck with Kenworth and Peterbilt as well. It really is a test. If you ask us that question a few months from now or a year from now, we’ll be better qualified to answer.”

For now, the company is in regular contact with Caterpillar engineers to provide feedback and suggestions on how the truck can be improved. There have been no major performance issues; just small glitches that have been quickly addressed by local dealer Toromont Cat.

“They’re quick to respond if there has been any issue at all,” said Paxton.

J.F Kitching & Son was founded in 1946 by Grant’s parents, John and Elma. It started out with a few trucks, backhoes and excavators. The company moved into its current home on Kennedy Road in Queensville, Ont. in 1969 and today runs nearly 50 trucks, delivering product from its expansive gravel pit to local landscapers and construction firms. In recent years, the company has diversified, adding live-bottom trailers and flatdecks to its fleet in an effort to keep its drivers busy year-round.
Drivers are paid by the hour and home every night, resulting in a content workforce with very little turnover, noted Paxton. Drivers also appreciate the quality of the equipment; trucks are replaced every five years, which is extraordinary in the vocational segment. Robinson, one of the company’s many long-serving drivers, has been with J.F. Kitching & Son for 17 years.

“I came here to work part-time,” he recalled. “They treat me like gold and I’ve stayed here. I don’t plan on leaving.”
Grant and his wife Betsy are very much involved in the company today, as well as their children Mike and John Kitching and Lynne Paxton. A fourth generation recently started working there as well; two of John’s sons and Lynne’s daughter are now J.F. Kitching & Son employees.