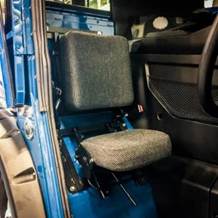 NIAGARA FALLS, ON – Drivers who hop in and out of Mack LR refuse vehicles will enjoy a more comfortable ride thanks to the combination of a new multi-position seat and re-aligned accelerator pedal.

The seat for the right-hand stand-up/sit-down drive configurations was unveiled during the Canadian Waste and Recycling Expo.

The Sears Seating model’s back and seat pan can slide up and down, while the back can change depths and the seat pan can change angles. That provides support whether operators want to sit or stand as they drive from one pickup to the next.

The seat is actually part of a system that includes an accelerator pedal that has been realigned to sit at a more comfortable angle, said Curtis Dorwart, Mack refuse product manager.

“We found that different-sized drivers, different-height drivers, they were having a difficulty really working with the three-position seat that we’ve had for a good number of years on the LE model – the predecessor to the LR model. So we went through a little bit of an exercise with Sears Seating to develop a new seat that has multiple adjustable positions on it,” he said.

This is actually the third generation for the seat, which has evolved from a sitting or standing position, to the addition of a third position, and now the added flexibility in between.

“This is really kind of the bread-and-butter base vehicle setup that will be included with the new seat in the first quarter,” Dorwart says.