ALLENTOWN, PA – Mack Trucks is singing the praises of its new Anthem, a highway tractor that will replace axle-back versions of Pinnacle models on the road today.

As a related theme song suggests (yes, it was released complete with a country song), it is “born ready” for life on the highway. Mack is also quick to stress that it’s born in the USA. An official launch for dealers and industry journalists came complete with waving flags, country music, and multiple references to manufacturing at Lehigh Valley Operations in Pennsylvania. An American flag has even been stamped right next to the Anthem name on the truck’s badge.

“We have helped build America,” proclaimed Mack president Denny Slagle, referring to the company’s 117-year heritage. “We have arrived at an important milestone. This launch should be seen as a new day, a new start, a game changer for our beloved Mack brand.”

“The Anthem has been part of our product strategy for the past several years,” said Roy Horton, Mack’s director – product strategy. And it’s a key rollout for the manufacturer, which despite double-digit market shares in segments like vocational, refuse, and regional trucking, accounts for about 2% of on-highway truck sales.

The Anthem comes as a day cab, and with a 48-inch or 70-inch sleeper. Unlike the increasingly rounded shapes that have emerged in other designs, the Anthem’s profile features prominent edges and flat lines. But Mack stresses that the Anthem’s fuel economy is still 1.5% better than current Pinnacle axle-back tractors, and 3% better for those who spec’ the 70-inch stand-up sleeper. That’s on top of fuel economy gains realized with the company’s GHG17 engines. 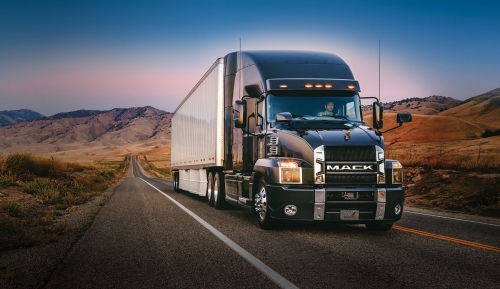 “A truck doesn’t have to look like a jellybean to get good fuel economy,” said John Walsh, Mack vice president – global marketing and brand management.

“Our main goal through this whole thing was to design something that looked like a Mack,” said Stu Russoli, highway product manager, referring to the need for an aggressive appearance. “Make it aerodynamic and make it bold.”

Rather than gentle curves, the horizontal and vertical lines are meant to look “structural”, with the Mack name stamped across the bridge that slashes across the middle of the grille. The hood has a different contour than the Pinnacle that came before it, and fenders sweep back to guide the air down the side of the trailer. Even hood mirrors and West Coast mirrors have been lined up to improve the flow of air, while tow loops are covered to cut down wind resistance.

Should parts of the bad-ass new truck be damaged in a collision, the bumper and hood are both constructed with three separate pieces that can be replaced independently. Hood-mounted mirrors are also designed to fold out of the way on impact, rather than being fixed in place on a tripod-style mount. Breakaway mirrors include spring-loaded mounts, and there is no plastic in the hinges.

An angled paddle release now found under the hood makes it possible to access the engine compartment without walking to both sides of the cab. Once released, the hood opens by pulling the trademarked bulldog that rides up front. Should the cables for the release break, latches are still available on each side of the hood as a backup. 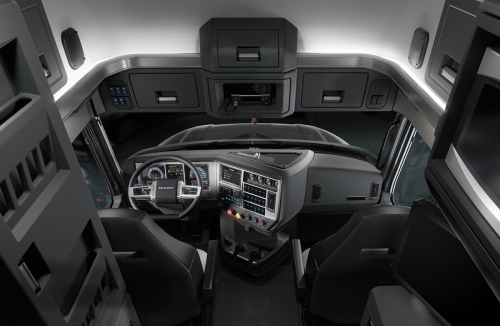 Facing ahead from the vantage point of one of 30 available Sears driver seats, one of the most prominent changes is a steering wheel with a flat bottom that improves entry and exit, drawing inspiration from race cars. It also incorporates optional buttons for cruise control, Bluetooth devices, and audio.

Looking through the steering wheel, performance data is delivered through a five-inch color Co-Pilot display, while a seven-inch dash-mounted “infotainment” display offers access to features like satellite radio. Co-Pilot offers information such as engine and oil temperatures, odometers, aftertreatment status, and tire pressures, while a pre-trip inspection assistant will guide drivers through related steps and also blink all exterior lights for a single-person check. Warnings through the Co-Pilot are in red and yellow. And the infotainment system supports everything from Apple CarPlay to TomTom navigation, and third-party backup cameras.

The shift pad for the 12-speed mDrive Automated Manual Transmission has been moved closer to the driver when compared to the Pinnacle dash, and moves up to the location of the infotainment screen if the latter isn’t spec’d. There’s a good chance that most buyers will be opting for the transmission, though. The mDrive is already spec’d in 88% of Mack’s on-highway products, just six years after being introduced.

Switches for functions like cruise control, PTOs, and traction control have been etched with lasers to ensure a long life for related markings and labels. That’s particularly important when considering second buyers, Russoli says. “If everything is worn and worn off, you have that impression that is what a Mack is.”

There’s also the option of four auxiliary gauges above the switches. Those who opt against the gauges receive a small storage bin in their place.

Atop the dash is a slot that will hold a cell phone on its edge, along with a ridge designed to hold a charging cable as it snakes to an integrated power port.

And every piece of trim that looks like metal is that very thing, right down to the extruded aluminum handles on three storage compartments above the windshield. 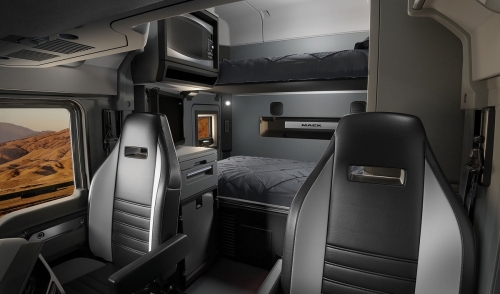 Behind the cab, the 70-inch sleeper is high enough that someone taller than six feet can walk upright from the driver’s seat to the bunk. There’s also an extra 35% of available storage space when compared to the Pinnacle, including redesigned back-wall and side cabinets, adding up to an optional 27 cubic feet. To put that in perspective, Anthem storage areas would hold between 8,651 and 18,514 golf balls.

Different storage areas include such things as three removable trays that sit below the mattress and above the under-bunk storage. (One of the trays is removed if a fire extinguisher is stored there.) A tall wardrobe, meanwhile, includes a hanger bar, magazine slots, and mirror on the door. At the passenger side of the vehicle are prep kits for a microwave, drawer-style refrigerator, or cabinets. Other creature comforts are supported with a television prep kit that can secure a 24-inch flat screen.

Overhead, a single-piece composite roof has been introduced to help prevent leaks. There is no skylight, either. “Anywhere you have cutaways in the roof are a leak point,” Russoli said.

Windows on the side of the sleeper, meanwhile, incorporate aircraft-like shades and integrated screens.

Next to the bunk is an environmental control module offering HVAC controls and auxiliary power, as well as a 120-volt outlet and USB power.

Even the flat-roof sleeper can be spec’d with single or double bunks, and that option hasn’t been available in flat-roof Pinnacle designs.

Under the Anthem’s hood will be a 13-liter MP8 engine, feeding up to 505 horsepower and 1,860 lb-ft of torque into 12-speed mDrive transmissions and Mack axles, or the optional 11-liter MP7 delivering up to 425 horsepower and 1,560 lb-ft of torque. Further fuel economy can be realized with SuperEconodyne downspeeding packages, which include the Mack MP8-TC engine with turbocompounding. That converts waste heat from the exhaust into mechanical energy.

Mack Connect service, meanwhile, is the umbrella for connected support, connected business, and connected driving. It draws on predictive analytics to combine data from the truck, driver, and service processes. If problems are identified through the Mack GuardDog Connect telematics, notices are sent automatically to staff at the Mack Uptime Center, where OneCall agents determine severity and reach out to designated contacts, feeding the information through the ASIST portal. If service is needed, the closest dealer is identified, while space in the service bay and parts availability are confirmed, even as the truck is still on the road.

Keeping the new highway tractor on the highway, after all, is the ultimate goal.

This is Mack’s Anthem.

Full production begins in the first quarter of 2018, and the truck will be released as a 2019 Model Year.