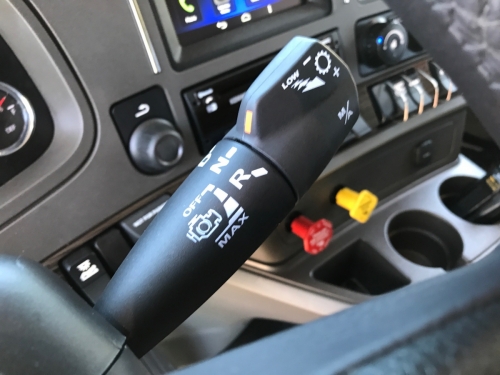 MT VERNON, WA – Paccar has unveiled a 12-speed automated transmission, rounding out a proprietary powertrain with the promise of better fuel economy and smoother shifts along the way.

Developed over three years in a partnership with Eaton, the transmission will be released into the market this October.

“The Paccar automated transmission is engineered to work seamlessly with Paccar MX engines and Paccar axles,” says Landon Sproull, Paccar vice president. It will support linehaul applications with Gross Vehicle Weights up to 110,000 pounds, and engines delivering up to 510 horsepower and 1,850 lb-ft of torque. The first units will be an option with MX-13 engines.

In-cab controls come in the form of a shifter mounted on the steering column. Drive, neutral and reverse are set by twisting the controller, while a push on the end turns it into a paddle shifter in a manual mode. Four engine brake settings are engaged by pushing the shifter up or down. Information about selected gears and settings, meanwhile, appear in the driver information display.

This is a purpose-built transmission rather than a converted manual design like those that have been used in the past. “We wanted to specifically design a transmission that would meet the objective of the vehicle,” says Sproull.

SEE A VIDEO REVIEW BY JIM PARK BY CLICKING HERE

Truck buyers clearly have a thirst for automated transmissions. About 70% of Kenworth and Peterbilt fleets are already ordering the technology in over-the-road trucks, and the share of automated transmissions is expected to grow as a new generation of drivers enters the industry, says Sproull. “It will help drivers reach peak performance sooner,” he adds, stressing that training is simplified.

Mike Dozier, Kenworth general manager and Paccar vice president, went so far as to call automated designs the “new normal for linehaul customers”, and projected they will account for 90% of transmissions ordered for Peterbilt and Kenworth trucks by as early as 2020.

Each new 12-speed model is also expected to be in service for years to come.

“We’re confident in the durability of this transmission,” Sproull says.

Faith in the new product is reflected in an expansive five-year/1.2-million-kilometer warranty and 1.2-million-kilometer drain intervals to match. Fluid levels themselves are monitored with a differentiated fluid pressure detection system, generating two stages of in-dash warning lights for those behind the wheel. The transmission requires just 7.5 liters of the fluid, too, about half as much held in a comparable transmission, Paccar says.

It uses pneumatic shift and clutch actuators, and inertia brake controls, found in a mechatronics transmission module sitting on the top of the transmission. Air connections and wiring are largely tucked inside that, protecting them from the elements.

Indeed, it’s built to last. This transmission has a B-10 life of 1.9 million kilometers, meaning that 90% of the transmissions would last at least that long.

“It is the lightest and most efficient 1850 lb-ft capable heavy-duty automated transmission,” says Carl Hergart, director – advanced technology at the Paccar Technical Center. “It’s got an all-aluminum enclosure, optimized gear design, and a twin-countershaft architecture.

“A 12-speed overdrive architecture provides the widest gear ratio coverage on the linehaul market, and that is significant because it enables us to offer both class-leading efficiency at cruise speeds, but at the same time excellent low-speed manoeuverability,” he adds.

The transmission’s 2x3x2 architecture refers to the number of forward gear ratios in the front, main and rear case. “We’ve got two reverse gear ratios, the first of which is the deepest for a linehaul application,” Hergert says.

Some of the changes most obvious to drivers involve the way the transmission performs at low speeds. The starting gear, for example, is based on grade and vehicle weight. A feature known as Hill Start Aid will keep the truck from rolling back when first starting on an incline. Release the brake and the truck begins pulling forward like you would normally expect in a family car.

Rather than requiring a dual-plate ceramic clutch, refined controls allow a sealed, 17-inch single-plate organic clutch to be used, so the control is more precise when trucks launch from a stop. And the clutch itself is warrantied for three years or 560,000 kilometers.

A new predictive cruise control uses GPS positions to tell the truck when to downshift on a grade, hold the gear on a flat when anticipating an upcoming grade, allow the speed to drop temporarily when rolling over the hill, and recovering speed on a downhill grade in a “neutral coast” setting.

For those who need Power Take Off functions, there’s a bottom-mounted eight-bolt unit that can deliver up to 95 horsepower.

The transmission has already completed more than 3.2 million kilometers of on road tests, on top of the work at the Paccar technical center. There, a new powertrain test cell was developed to take a combined engine, transmission and drive axle through its paces. Paccar says it’s the only test cell of its kind in the trucking industry.

Even 3D printing was employed in the production process, creating a mockup that Peterbilt and Kenworth engineers used to ensure the final transmission would fit into the trucks themselves.

It is the final piece of a proprietary powertrain system that now includes engine, transmission and axles. The Paccar 40,000-pound tandem axles were unveiled in January, with ratios of 2.47-3.70, offering their 1% boost in fuel economy compared to previous models. Paccar front axles, available in October, come with 20,000 and 22,000-pound weight ratings.

Weight savings have not been limited to the transmission. The MX13 engine is 144 pounds lighter than pre-2017 models, and axles trim another 150 pounds when compared to their predecessors, says Kyle Quinn, Peterbilt general manager and Paccar senior vice president.

Collectively, the powertrain improves fuel economy 7%, with 2% through downspeeding, 4% through the engine, and about 1% with the new Paccar axles.

The idea of a 12-speed transmission is more familiar to Europeans, but Eaton was always identified as the preferred partner on the work. “Eaton’s been our partner for a long time and they’re a great partner in North America,” Sproull says. “We wanted a transmission that did well at low speeds and also performed well at higher speeds.”

“We carried over a lot of the fuel economy improvements that were introduced on the [Fuller Advantage Series] product,” Hergart adds. “We are also carrying over from the [Fuller Advantage Series] the coolerless design. But it is a significantly lighter design and also flexible in terms of any future offering we might think about. This architecture lends itself well to 13 through 18 speeds if we decide to do that.”

No timelines have been announced for other releases.

The 12-speed automated transmission will be produced in Mexico.