November 15, 2010
TORONTO, Ont. -- When passing time on a recent drive between Boise, Id. and Seattle, Wash., Sean Graham noticed a surprising number of trailers with side fairings, and so he decided to keep count. The final tally revealed more than 10% of the... 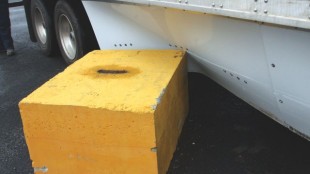 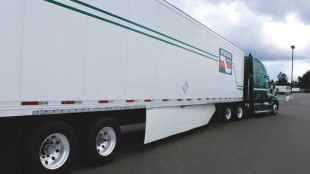 TORONTO, Ont. — When passing time on a recent drive between Boise, Id. and Seattle, Wash., Sean Graham noticed a surprising number of trailers with side fairings, and so he decided to keep count. The final tally revealed more than 10% of the 200 trailers he counted were fitted with side skirts. The findings of his interesting, if highly unscientific, study surprised Graham. But maybe it shouldn’t have. After all, he’s president of Freight Wing, one of the industry’s largest suppliers of trailer side skirts, which now has about 10,000 units on the road with sales up threefold over the past year.

“The interest in aerodynamic trailers has increased tremendously and our sales volumes have really just skyrocketed this year,” Graham says. “I think we’ve reached a critical mass and a tipping point in the industry where you now see them out there. You get on the highway these days and it’s no longer surprising when you see a truck with an aerodynamic trailer rolling down the road.”

Freight Wing was one of the first manufacturers to introduce trailer side skirts about seven years ago. While the premise remains the same – to keep airflow from tumbling underneath the trailer where it interferes with tanks, axles, tires and the like to create drag – the technology has evolved. And a whole lot of competitors have since sprung up with their own versions of the device, each with their own designs and fuel-saving promises.

Currently, trailer side fairings typically are constructed from three types of material: aluminum; plastic; or fiberglass. Each has its strengths and its fans.

“Aluminum works great for a lot of fleets, as long as you don’t run into things,” Graham says, noting Freight Wing’s first side skirts were made from aluminum. “Some fleets can control their equipment pretty well and for an owner/operator that can really take care of things, aluminum works great. Larger fleets with trailer pools where they’re never sure who’s going to pull them tend to see less favourable results with aluminum.”

Today’s version of the Freight Wing Aeroflex side skirt is constructed of automotive-grade plastic, like you’d find on a car bumper. The material is flexible when impacted from the side and also from the bottom, allowing the device to ride closer to the ground for greater fuel savings.

“Plastic wears quite well, even when it’s dragged over obstacles such as railway crossings,” Graham says. “It won’t delaminate. A little bit of material along the bottom edge will get scraped off, but you’re not going to wreck it.”

Fiberglass fairings, while able to withstand side impacts reasonably well, tend to become frayed and delaminate along the bottom edge when dragged over obstacles, Graham points out.

Customers have their own opinions as well. Wayne Scott, senior director of transport maintenance with grocery giant Loblaw, said he favours fairings made of thermoplastic composites such as Ridge Corp.’s Green Wing, because they are easy to repair.

“They’re very durable and easy to repair if they do crack,” he says of Green Wing fairings as well as Transtex Composite’s MFS skirt, both of which are used by Loblaw. “You can use an iron from home to put a patch on it; there’s resin in there that will melt with the heat. With the other ones we’ve tried, which are made of aluminum, you end up having to replace a whole panel.”

Silver Eagle’s Aero Saber skirt is one such offering that’s constructed of aluminum. While it may be damage-prone, Scott said it does have its advantages.

“We tried some Silver Eagles more because of ground clearance than anything,” he said. In fact, Silver Eagle says its aluminum skirts ride 18 inches off the ground, providing more ground clearance than any other offering in the market, and it comes with a limited lifetime warranty, which should provide some peace of mind about damage. While the ground clearance may be welcomed – especially in Canada where snow and ice can accumulate in truck yards and around loading docks – it can also limit the fuel-saving potential of the device, Graham contends.

“Our research and development wind tunnel testing clearly demonstrated that the closer you can get the fairings to the ground, the more fuel they save,” he says.

SAE-approved fuel testing methodology, such as that employed by FPInnovations during its well-known Energotests in Blainville, Que., has validated the fuel-saving claims of trailer skirt manufacturers. The 2008 version of Energotest found trailer skirt systems from Freight Wing and Transtex Composite provided 7.5% and 7.4% fuel savings respectively. But those track tests are conducted entirely at highway speeds and don’t account for stop-and-go traffic or other low-speed situations.

“A fleet that’s doing local deliveries and never getting over 30 mph is not going to see the same results,” Graham admits, noting most line-haul fleets will realize a 5-6% fuel savings overall.

Loblaw’s Scott suggests fleets focus on line-haul equipment when choosing to retrofit trailers. His company is retrofitting about 100 of its trailers with fairings this year, but “not all of our vehicles will get them,” he notes. “Some of our vehicles only average 25-30 mph. You can’t get up to road speed between Milton and Pickering between 7 a.m. and 5 p.m., so we’ve selectively picked lanes that will best suit that type of technology. For the vehicles going in and out within a 50-mile radius of the distribution centre, they don’t have any value – there’s no wind resistance at 30 mph. But for our vehicles that are going from Toronto to Sudbury and Sault Ste. Marie, they make perfect sense.”

With the driver shortage and capacity crunch that so many are predicting is just around the corner, some progressive fleets are even using side fairings as a creative way to attract and retain owner/operators.

“I have worked with some owner/operator fleets that have been pretty progressive and have come to us wanting to implement aerodynamic trailers simply as a driver benefit,” Graham says. “We have worked with fleets that are 100% owner/operators, so the fleet itself doesn’t pay for any of the fuel and it’s no benefit to their bottom line to implement, yet they’ve gone forward and put aerodynamic fairings on trailers simply as a benefit to their drivers, because it can make a significant difference to the bottom line of an owner/operator.”

That’s a theory that some owner/operators have figured out on their own. While the large fleets that are spec’ing and retrofitting trailers with aerodynamic fairings are the most visible, the potential fuel savings have not been lost on owner/operators like Greg Decker, owner of Triple Decker Transport, which is leased to Caneda Transport. He says his tractor wasn’t living up to fuel economy expectations and when his 2008 fuel spend topped $100,000, he turned his attention to the trailer. He purchased a set of Windyne Flex Fairings for his Utility trailer and saw his fuel mileage climb from 6.26 US mpg in the four months prior to the installation to 6.82 in the four months immediately following the purchase – an 8.94% improvement.

Decker says he also switched to low rolling resistance tires and reduced his top speed to 62 mph, so the side skirts may not deserve all the credit, but they were certainly a major contributor to the mpg improvement. Decker predicts a payback of less than one year. Decker is so impressed with the system he recently provided a demonstration to the Alberta Motor Transport Association. Decker has a Canadian winter under his belt with the new fairings and said snow and ice accumulation was a problem only once. Most of the time, he says, snow can be removed from the fairings with a simple tap with the tire thumper.

When skirt shopping, there are many things
to consider, including weight, ground clearance, durability and ease of installation and repair. Decker chose the Windyne system because it didn’t interfere with his tire carrier and toolbox. Some systems consist of multiple panels, which make repairs easier and less costly than replacing the entire system, but may break apart and look flimsy at highway speeds. It’s also a good idea to inspect the brackets that hold the fairings in place. Are they durable, yet flexible?

Once you’ve installed a system, Graham suggests inspecting trailer fairings as part of the normal trailer inspection process, looking for loose fasteners and damaged brackets. For the most part, trailer fairings should be worry-free.