November 23, 2010
TORONTO, Ont. -- Canadian trucking companies and US carriers that operate here could save $2.2 billion in fuel over a 10-year period if Canadian regulators would ease restrictions on trailer tails. 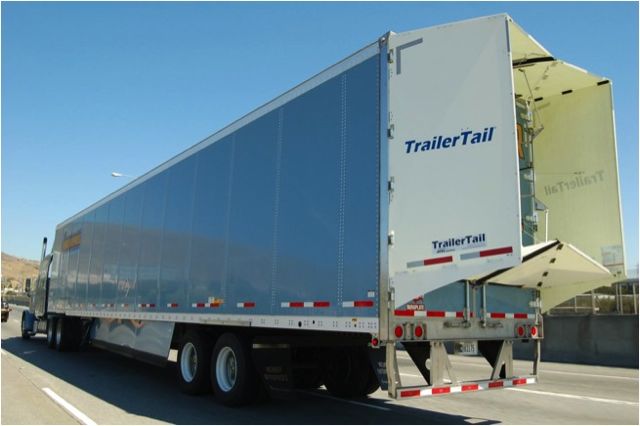 ATDynamics is trying to get Canadian rule-makers to relax the current restrictions the company says prevent the widespread use of trailer tails.

TORONTO, Ont. — Canadian trucking companies and US carriers that operate here could save $2.2 billion in fuel over a 10-year period if Canadian regulators would ease restrictions on trailer tails.

That was the message Andrew Smith, CEO of ATDynamics brought to the Council of Ministers Responsible for Transportation and Highway Safety’s Task Force on Vehicle Weights and Dimensions Policy during a national meeting here yesterday.

In an interview with Trucknews.com following the meeting, Smith said current Canadian regulations are ineffective, since they allow aerodynamic devices to extend just two feet off the rear of the trailer. Canadian officials have expressed concern about the devices, and particularly the carnage they could impose on a passenger vehicle in the event of a rear-end collision.

Those concerns prompted ATDynamics to go back to the drawing board and redesign the original aluminum honeycomb trailer tail it introduced in 2008. Just weeks ago, the company came out with its ‘next generation’ TrailerTail 2011 which is a “non-rigid” design that collapses on impact without damaging so much as a car windshield at highway speeds.

Smith said the new design actually improves highway safety, since it causes motorists to stay further behind the steel rear frame of the trailer while travelling down the highway and as a bonus it reduces road spray, improving visibility.

“It’s a safety-enhancing piece of equipment,” Smith said. “We believe that over the next year, there’s the right momentum to get the regulations modified to allow non-rigid trailer tails in Canada.”

Some Canadian fleets aren’t willing to wait, he told Trucknews.com. Without dropping names, Smith said about six Canadian fleets have committed to deploying the new trailer tails by the first quarter of 2011 – they’ll simply have to close the tails while travelling in Canada. Collapsing the fairings is a one-man job that takes just four seconds, Smith noted. So why the sudden interest in trailer tails?

Smith said independent SAE Type II tests have shown they can save fuel by 6.6% at 65 mph all on their own. When combined with trailer side fairings, a savings of 9-12% can be achieved.

“Any high-mileage fleet that wants to be highly-profitable should have both tails and skirts,” Smith said.

While the trailer side skirt market is cluttered with providers, ATDynamics is the furthest ahead (and the first to get DoT-approved, Smith noted) in developing and implementing trailer tails. It has partnered with Canadian side skirt provider Transtex Composites to offer a complete trailer fairing solution. The trailer tails on their own cost about $2,000 and installation is about a two-hour job for two experienced installers, however a new record was recently set with installation taking two guys just 32 minutes, Smith said.

In the US, where trailer tails are allowed without restriction, there are still less than 1,000 systems on the road but that’s about to change rapidly, after US mega-fleet Mesilla Valley Transportation inked a deal to retrofit all 3,500 of its trailers with ATDynamics’ new TrailerTail 2011 system. Currently, Mesilla Valley is retrofitting 10-14 trailers a day, Smith said.

“They’re trying to get them out there as fast as possible,” he said.

The hardware is constructed of stainless steel and able to hold up to harsh Canadian weather, Smith said. They’re compatible with all makes of van and reefer trailers (including drop decks) but they’re not yet available from the factory, something Smith said will soon change.

Having adequately addressed the safety concerns of Canadian rule-makers, Smith is optimistic the stage is set for the more widespread use of the fuel-saving device here in Canada.

“Over the next year, I think a handful of provinces will take the lead to provide exemptions for the technology, eventually resulting in a national upgrading of the regulatory framework,” Smith predicted, although he admitted overcoming government roadblocks in Canada is a challenge. “It took us eight months in the US (to get approved) and now we’re on to three years here, so I’m hoping we can turn the corner here.”