Volvo to bring DME-fuelled trucks to North America in 2015 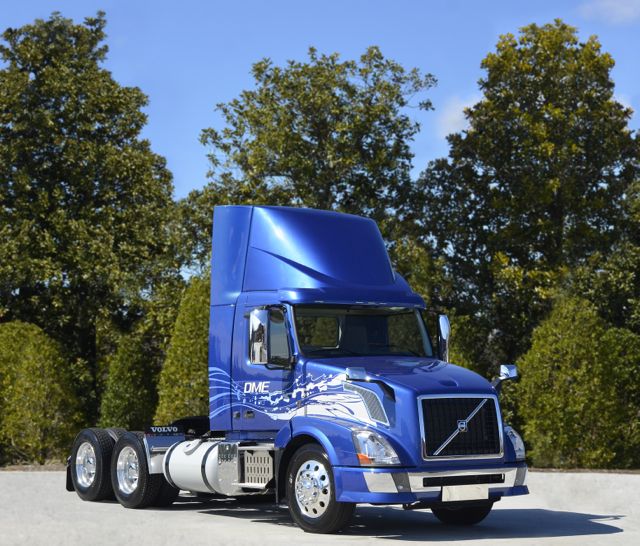 Volvo is commercializing a DME-fuelled VN tractor in 2015.

The announcement was made at the State Capitol, along with partners including Safeway and Oberon. Safeway will test the technology within its fleet and Oberon has developed a proprietary, small-scale method of creating DME at customers’ facilities.

DME can be produced from many methane-containing products, including food waste and natural gas, and according to Volvo, can deliver more diesel-like performance than natural gas.

It’s also expected DME trucks will be less costly to build, because the fuel is housed in a steel tank, rather than the heavy and costly insulated tanks required for natural gas. The base engine will be Volvo’s D13, with few changes required other than a new fuel system and fuel pump. The I-Shift transmission will be standard.

DME is a clean-burning fuel, its molecular make-up absent of bonded carbon, meaning it produces no soot, eliminating the need for a particulate filter. Volvo’s first DME-powered trucks will still carry selective catalytic reduction (SCR) exhaust aftertreatment, but alternative fuels product marketing manager Ed Saxman said the company may eventually be able to eliminate the SCR system. Another benefit is that cooled exhaust gas recirculation (EGR) won’t be required, so EGR valves and coolers will be eliminated.

DME reduces CO2 output by as much as 95% compared to diesel. Oberon Fuels’ skid-mounted, small-scale production units can cost-effectively transform biogas and natural gas into DME. Volvo officials predicted DME will be cost-competitive with diesel, but won’t be influenced by the price of crude oil. The trucks themselves should be “cost-competitive” with today’s diesel versions, but it’s too early to comment on pricing, officials said. Volvo has been touting the benefits of DME for several years, and has collected 650,000 miles in real-world fleet testing around the world.

The big breakthrough in North America came through Oberon’s ability to cost-effectively produce the fuel.

“Our small-scale process enables the utilization of regional feedstocks to produce DME,” said Rebecca Boudreaux, Ph.D., president of Oberon Fuels. “Cost-effective, regional fuel production addresses the distribution issue, and offers the potential to bypass the need for a national fuelling infrastructure, while reducing the carbon footprint associated with transporting the feedstock and the fuel produced.”

Saxman said the DME-powered Volvo will have a range of about 600 miles, making it practical for regional haul applications with return-to-base equipment. Fuel can be stored on-site in propane-type tanks.

The fuel works consistently regardless of the feedstock used, so customers can use whichever feedstock is most readily available. It could be cow manure in rural areas or natural gas elsewhere. The energy density provided by each feedstock varies, with cow manure offering the least amount of energy and food grease and fat the most.

Oberon has built two DME production units, one in Chicago and the other in Brawley, Calif. The Brawley operation produces 4,500 gallons of DME per day, processing about 100 tonnes of food waste, which is enough to fuel about 60 trucks. A 10,000 gallon per day facility can also be chosen, which would keep 100-150 trucks running, Boudreaux said. Oberon is prepared to bring its fuelling technology to Canadian fleets that invest in DME trucks.

Look for a full report on DME as an alternative fuel, including a road review, in the July issues of Truck News and Truck West.