Ontario’s auditor general has sharply criticized the Ministry of Transportation over falling roadside commercial vehicle inspections, saying not enough is being done to ensure road safety.

The rebuke came in the Annual Report released on Wednesday by Auditor General Bonnie Lysyk.

The audit found that there are many opportunities for the ministry to improve overall safety through its Commercial Vehicle Safety and Enforcement Program, the report said.

It said one of the most important activities the ministry performs to ensure safety is its roadside inspections of commercial vehicles. 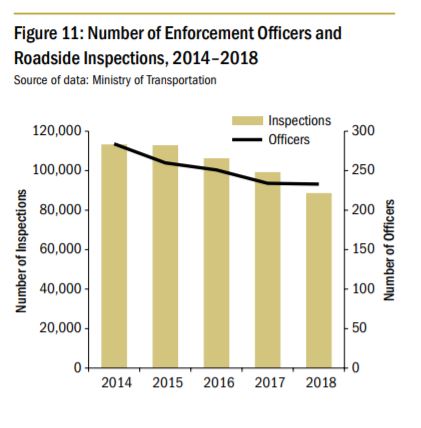 “However, we found that between 2014 and 2018, the number of inspections the ministry conducted decreased by 22%, from over 113,000 in 2014 to fewer than 89,000 in 2018, because the ministry was unable to fill enforcement officer vacancies, and because the majority of enforcement officers did not meet their individual annual productivity targets for the number of inspections to complete.”

It said, as a result, the ministry missed the opportunity to remove thousands of additional unsafe commercial vehicles and drivers from Ontario’s roads.

The report also said that the ministry had estimated that Ontario’s truck traffic increased 10% from 2009 to 2018.

The collisions resulted in almost 44,000 injuries and 1,180 fatalities.

Commercial vehicles were at-fault in 46% of these collisions, including 33% of collisions that resulted in a fatality, whether due to the driver’s actions or the vehicle’s condition, the report said.

“According to the ministry, the direct social cost of large truck collisions in Ontario for the five-year period from 2011 to 2015 (the most recent data available) was $2 billion,” the report added.

The report noted that Ontario consistently ranks among the safest provinces in Canada and compares favorably to the U.S. for overall road safety.

“However, Ontario maintained higher fatality and injury rates than Canada as a whole and the United States in the majority of years between 2008 and 2017 when evaluating only commercial vehicles,” the report said.

In 2018, about 60,000 carriers were registered to operate in the province and there were over 290,000 registered commercial vehicles.

The audit concluded that the ministry does not have fully effective and efficient processes and systems to consistently carry out safety programs that promote and enforce the operation of commercial vehicles.

The full report is available here.

In its response, the ministry said it appreciates the work of the auditor general and welcomes the recommendations on how to improve the Commercial Vehicle Safety and Enforcement Program.

“We agree with all the recommendations and are committed to implementing them as quickly as possible and will report back regularly on our progress,” it said.