LAVAL, Que. – As trucking industry office workers from across North America adapt to the realities of working from home, it should come as no surprise that engineers have employed some fairly clever ways to get the job done.

At Nordresa, a Laval, Que.-based developer of electrified powertrains recently acquired by Dana, a tight-knit group of 45 employees began working from home in mid-March. Having recently gone from a small company of a few dozen to part of Dana’s global workforce of 35,000, work travel had skyrocketed.

“There were perpetually Dana people in our facility or our people at a Dana facility,” said Marc Daigneault, co-founder of Nordresa and head of e-vehicle integration, engineering. Engineers were in a product development stage when the shutdown hit, frequently visiting customer facilities and collaborating with new colleagues as far away as Mexico, Germany and the United Kingdom. The sudden stay-at-home order issued in Quebec in mid-March meant engineers had to quickly adapt to a new reality.

“We didn’t know initially if it would be a week, two weeks,” Daigneault said in an interview with Today’s Trucking. “We didn’t imagine it would be 12 weeks, and we had to get pretty creative originally to start working together remotely.”

Engineers are used to collaborating in person, examining parts in hand and having impromptu brainstorming sessions. Instead, Nordresa engineers began using Microsoft Teams for meetings and document sharing, while using cellphone cameras to exchange visuals with peers.

“All our data systems are in the cloud,” Daigneault said. “We have access to all our IT systems and every piece of software we need.”

In some cases, engineers took the work-from-home experience to a whole new level, constructing makeshift labs in their living rooms. One Nordresa battery management system engineer built a hardware-in-the-loop system on his coffee table, which was connected to the internet so programmers in Michigan could push software to it for testing.

Another set up a harness assembly station on his kitchen table, and brought in engineering peers for design reviews using his smartphone camera.

In terms of the impact on project rollout, Daigneault said some short-term timelines were affected when the shutdown limited parts availability, but because Nordresa was working on multi-year programs, there’ll be no major disruptions to its longer-term plans.

There have even been some benefits. Daigneault said the company has had to become better organized, and if anything, communication has been heightened.

“Working from home forces us to schedule more meetings,” he said. “One thing we put in place are daily stand-ups. Every day with my team we spend a half hour on the phone talking about our objectives for the day, what we’re trying to accomplish, what our roadblocks are. This is something we will keep doing after Covid. It’s a great way to share information.”

He also said the company will be more lenient towards working from home in the future, since employees have proven they’re able to do so productively. And there are times, he acknowledged, that the open concept office isn’t the best environment for focusing. One thing he misses, however, is the extra-curricular activities that develop from working together.

“We did a lot of social activities, such as skiing in the winter and mountain biking in the summer,” he said.

Likewise, power management company Eaton has been adapting to new workplace realities by implementing a system it calls Industry 4.0. The company defines the concept as “both operational and informational technologies, enabling autonomous production systems that are connected, optimized, transparent, proactive, and agile. Supported by an integrated ecosystem, the technologies are composed of augmented reality, rapid application development, autonomous robots, digital simulation, and additive manufacturing.”

“I’m proud of our Vehicle Group team and their ingenuity, especially during the Covid-19 pandemic,” said Joao Faria, president, Eaton Vehicle Group. “By leveraging augmented reality, we are able to continue to support our operations remotely and continue the development of new products, ensuring our customer deadlines are met despite the global challenges we are all facing.”

It’s also continuing to train engineers on the use of new equipment, previously done in person, using augmented reality.

Robots are being used to optimize manufacturing flow and eliminate the need for forklifts and other human-operated machinery, while COBOTS – robots designed to interact with humans in a shared space – safely handle complex and repetitive tasks.

“This results in improved consistency and accuracy during the manufacturing process,” Eaton claims.

“The applications are being used to define new manufacturing cells and assembly lines or to redesign existing ones,” the company says. “In most cases, the Vehicle Group is seeing productivity increase from 10-30% via higher production output or reduced amount of investment needed.”

“Lead times can be reduced from weeks to days, while reducing costs from thousands to hundreds,” the company claims. 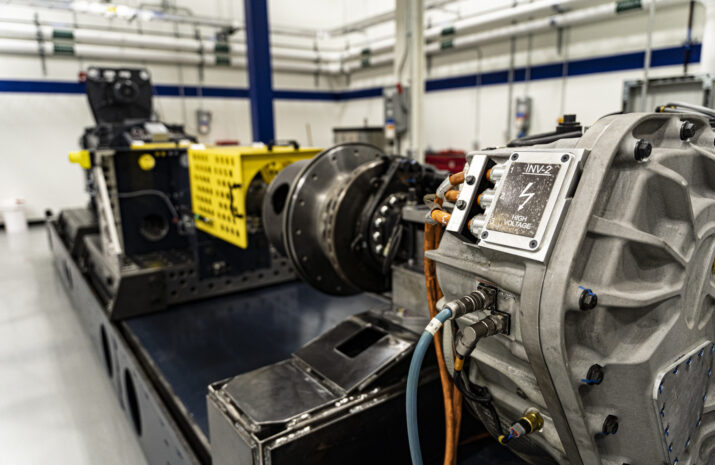