Cummins’ new X12 engine is slated to hit the street sometime early this year, probably shortly after its formal launch in February or March. The engine was introduced in August 2016 and I had a short drive with it then around the 11-kilometer track at the Transportation Research Center in East Liberty, Ohio. It wasn’t much of an opportunity to get to know the engine, but it whet my appetite. Cummins invited me to drive the new X12 this past November on a longer real-world route, starting from the plant in Jamestown, New York, where the X12 is to be built. 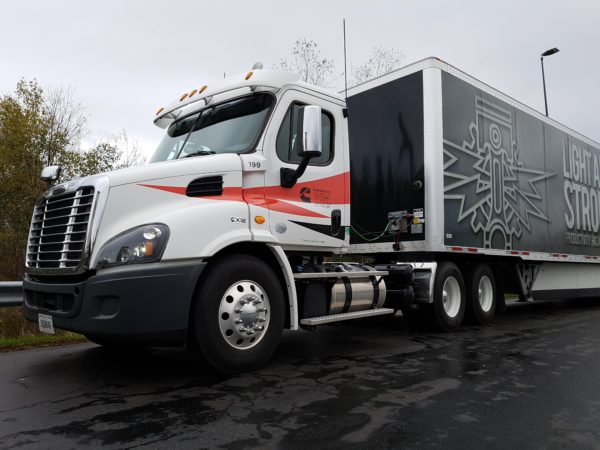 The X12’s 11.8-litre displacement puts it smack dab in the middle of the medium-bore market, but its published ratings put it squarely in 13-liter territory for torque and horsepower. Tipping the scales at just 2,050 pounds, it has the highest power-to-weight ratio of any heavy-duty engine from 10 to 16 liters in size, but it’s actually lighter than any of the 11-liter blocks on the market (subject to interpretation on how “dry weight” is determined).

The X12 was developed back in 2013 through a collaboration with China’s Beiqi Foton Motor Co. There, it was known as the ISG. The version of the engine we’ll see here in the next month or so has been almost completely re-engineered. Cummins tells me that close to 90% of the engine saw some re-engineering to ready it for North America.

We’ll learn more about the engine when it’s formally introduced, but based on what we know about the ISG, the X12 has about half the number of parts found on other diesel engines. It uses a sculpted block design to deliver extra rigidity and less resonant noise. The block was engineered to remove as much metal as possible to reduce weight without sacrificing structural integrity. Several composite components such as the rocker cover and oil pan also help reduce overall weight. It features optimized intake and exhaust ports for easier breathing, and coolant and oil galleries were engineered for easier flow with less pumping effort. It uses the XPI high-pressure injection system and a Cummins-designed integrated engine brake that delivers up to 50% more engine braking horsepower than traditional engine brakes, the company says.

I have also been told that the X12 will be available with Cummins’ full suite of electronic fuel efficiency and operational enhancements, such as ADEPT (SmartTorque2, SmartCoast, Predictive Cruise) Load-based Speed Control, and Connected Diagnostics. It will also use Cummins’ Single Module aftertreatment system.

For this test drive in a van trailer grossing 61,100 pounds, I ran about 150 kilometers on a nice mix of interstate, and flat and hilly two lane roads. I headed west on I-86 from the plant in Lakewood, New York, to North East, Pennsylvania, where I flipped back east on I-90. I got onto New York State Route 5 at Ripley, New York,, headed east to Westfield, and then back south to the plant on State Route 394 and 430. It’s a great route to test an engine like this because it’s exactly the kind of terrain on which it will operate in real life.

The engine was installed in a Freightliner Cascadia daycab with a manual transmission. I opted for the manual because it gave me a better feel for what the engine could do, unaffected by an automated transmission with ideas of its own. It was a 10-speed Eaton manual with a 0.78:1 OD ratio, 3.58:1 rears and 11R22.5 tires — a typical spec’ for a regional or pickup-and-delivery operation.

I can’t say how an automated manual would have handled it, but my inclination is to run the engine down as low as possible before downshifting, without trapping myself at too low an engine speed. I suspect an Eaton automated would have opted for higher shift points, and so might have spent more time in 9th gear on the two-lane sections than I did.

I did cruise along in 9th for a while on a hilly section of State Route 394 and was quite pleased with the very spry performance of the engine at between 1,500 and 1,700 rpm. The 9th gear gave me a speed range from 70 to 105 kilometers per hour at a useable engine speed, so I could have happily left it in that gear the whole time I was in the hills.

The engine responds very nicely to low-rpm operation in the bottom five gears, when I usually shift between 800 and 1,000 rpm. Startability is great with that gear combination. In the higher gears, shifts were comfortably made at 1,200 to 1,400 rpm.

The engine brake was fantastic for such a small displacement engine, and when the revs get up to 2,100 or so, you can really feel it digging in. With today’s low-rpm operation, it’s easy to forget about the top 500 rpm in the engine range, but that’s where the engine brake works best.

I think the X12 is exactly the right engine for the emerging regional haul market, and Cummins has nailed the performance curves. There’s nothing missing on this engine except a few hundred surplus pounds of engine block.