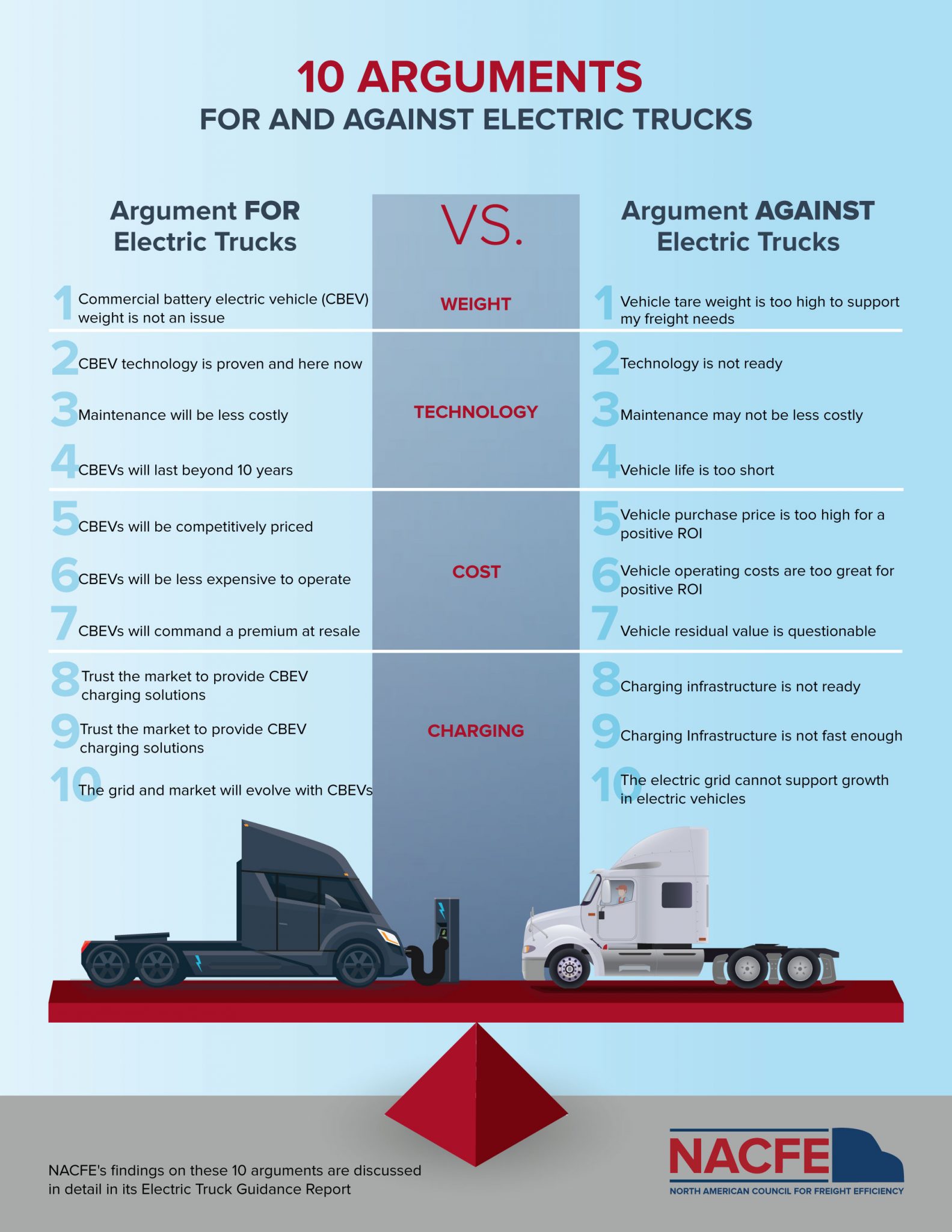 LONG BEACH, Calif. – Commercial battery electric vehicles (CBEVs) will play an increasing role in moving freight, but mixed fleets will likely be the norm through 2050, the North American Council for Freight Efficiency concludes.

The finding is part of an extensive “guidance report” on the evolving technologies for Class 3-8 versions of the vehicles.

“The transition in specific market segments will be drawn out over decades, sharing space with traditional gasoline, diesel, and other alternative-fuel powertrains and also competing with other emerging technologies like fuel cells and hybrids,” says Electric Trucks: Where They Make Sense.

Early adopters are expected to include Class 3-6 delivery vehicles where operations include stable routes of 80 to 160 km per day, loads that tend to cube out, and vehicles that run one shift per day before returning to a home base, researchers conclude. But the option may not be viable for Class 7 and 8 vehicles requiring longer ranges and heavier weights. Long-haul segments are expected to be the most challenging of all.

“There are many predictions about electrification. The reality is, for the foreseeable future, we will need a range of power solutions to provide fleets with the best opportunity for meeting their needs,” observes Julie Furber, executive director of electrified power at Cummins. “NACFE sheds light on many of the complexities that will impact the rate of electrified power adoption in commercial trucks.”

But gains in electrification are clearly being realized.

“A diesel-fueled truck may have 30, 60, or more [US] gallons in its fuel tank, meaning a potential daily range of hundreds of miles. While that truck only drives [40-160 km] per day, it could go much farther,” the report explains, offering an example of how parity should be considered. “Parity here requires advances in battery technology [e.g., energy density improvement and weight reduction]. The report outlines that this improvement is occurring and significant change is expected in the next decade.”

While preliminary findings suggest maintenance or service costs for battery-electric vehicles are average or slightly better than a typical truck with an internal combustion engine, they could eventually prove to offer bigger savings because of the simpler design of a CBEV.

“Feedback from medium-duty electric truck operators is that after separating out early failures, these vehicles over the long run do have lower maintenance costs versus diesel,” the report notes.

Operating costs could be lower because electric drives are more efficient than diesel engines, and there are fewer “friction-sensitive” mechanical systems such as pumps, valves, transmissions, and belts.

The council expects batteries will likely last longer than the seven-to-10-year vehicle life.

“Class 3 through 6 vehicles may not typically have a second life, as the first owner may run them until they are scrapped. However, the value of electric motors and batteries in salvage may prove an advantage as they can be re-purposed for non-vehicle uses and may have significant life left,” the report adds.

A guidance report on medium-duty battery electric trucks is scheduled to be released this fall.