TORONTO, ON – It’s a long journey to the top of the CN Tower. There are 1,776 steps for those who want to climb it; the glass-floored elevators are the world’s highest. The Toronto landmark even represented a final stop in the long journey toward a new engine oil category that officially took hold on December 1 – introducing a significant choice for buyers. 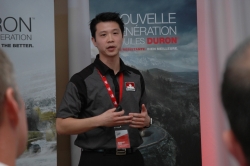 Yesterday, Petro-Canada used the setting to unveil formulas that meet CK4 and FA4 standards, which will play a key role in helping the next generation of engines meet tighter Greenhouse Gas limits. The only way to meet the coming emissions standards is to burn less fuel, and that’s were low-viscosity FA4 oils come into play, supporting 2017 engines and beyond. Meanwhile, their CK4 counterparts are backwards compatible for older engines.

While several companies have announced their related product lines in recent months, they couldn’t carry the official labels and new API “donuts” until today.

The CJ4 oils that are being replaced have been used for almost 10 years, which is rare for an oil category. Most last about five years. This is also the first time there’s been a split category, with two separate versions.

“It requires fleets to be that much more knowledgeable than in the past,” said Barnaby Ngai, category portfolio manager. “There are varying degrees of knowledge around the market.”

An FA4 oil promises up to a 2% boost in fuel economy when compared to a conventional SAE 15W40, and 1% when compared to a 10W30. But results will vary. Other factors such as equipment condition, weather and maintenance practices can all affect the final result.

Topping up an older engine with a bit of FA4 oil won’t be the end of the world, assured Brian Humphrey, OEM technical liaison – heavy duty driveline. “If it’s only for a week, a couple of days, probably nothing will happen.” Things become trickier with a full oil change. That’s when oil pressure lights might begin to glow. “Are you really going to kill the engine immediately? No,” he said. Detroit Diesel will even allow the FA4 formulas in 2010 Model Year engines and newer.

Of course, improvements to the updated oils are not limited to fuel economy alone.

“The new oils can do what the old oils did – and then some,” stressed John Pettingill, product specialist.

“There’s really no need to improve soot control. Soot has had its time where it probably has reached close to maximum levels and now it’s more or less on a downward trend,” Pettingill added, referring to the challenge that was introduced with earlier versions of Exhaust Gas Recirculation [EGR] systems. Newer equipment is leaning less on EGR and more on Selective Catalytic Reduction [SCR] equipment that uses Diesel Exhaust Fluid.

The improvements to specific formulas can be dramatic. Petro-Canada says its Duron Next Generation betters its now-replaced Duron E in several ways. Protection against tappet wear reportedly improves 41%, soot handling by 12%, neutralizing acids by 19%, shear stability by 33%, and cold-temperature start-ups at -20 Celsius by 6%. Cam lobe wear, measured by the Cummins ISB test, is said to be bettered by 51%, while engine protection measured in a Mack T12 test is 15% better.

The new oils are thinner than the formulas that came before them, but also stronger. With proper filtration, that could mean extended drain intervals. Petro-Canada has seen results pushed out as far as 70,000 kilometers in equipment loaded to 140,000-pound Gross Vehicle Weights. “The capability is always there [for extended drain] but you do want to make sure you keep your units in compliance with what your OEM tells you,” Pettingill said.

Petro-Canada itself offers three levels of CK4 oils in the form of Duron HP (High Performance), SHP (Super High Performance), and UHP (Ultra High Performance), the latter of which also includes a 5W40 for off-road applications. The FA4 comes in gold jugs of Duron Advanced. But the Duron E product family has been officially replaced across the board.

Expect the oils to come at higher pricepoints than their predecessors, though. Weatherill referred to the testing of the new category as a “significant investment”. Marketers, he said, will want to see a related return.

The purchase is expected to be approved in early 2017, and maybe as early as January, said Eric Attias, director – marketing and research and development. “They’re keen on growing and doubling the size of their business.”