ATHENS, ON — The Upper Canada Chapter of the Antique Truck Club of America shifted the location of this year’s show from upstate New York to the hamlet of Athens, Ontario. Athens is about 40 miles north of the Canada/U.S. border at Prescott, Ontario, and it’s home to the Tackaberry Collection, one of North America’s largest private collections of antique and vintage trucks. Collection owner and vintage truck aficionado, Charlie Tackaberry hosted the show at the Athens Fairgrounds. 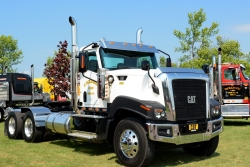 More than 100 trucks representing nearly century of trucking technology were on display ranging from a 1919 Ford Model TT to 2016 Caterpillar CT680L – the only one Cat ever shipped to Canada before discontinuing the line. It’s the same truck featured in Today’s Trucking’s recent Focus-On video test drive. There were trucks on hand from every decade from 1920s onward.

Owners towed, trailered or drove their trucks into Athens points all over Ontario, Quebec and New York, with several collectors and antique truck fans making the trip from as far away as Virginia, Pennsylvania and New Brunswick.

Among the more unusual trucks on display was a tractor trailer combination dating back to the late 1920s, owned by Jean-Claude Fortin. Fortin says the truck and trailer (a 1929 GMC model T-60-C and a 1933 Fruehauf 16-foot open-deck trailer) belonged to his grandfather and served in his original fleet. 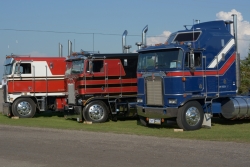 Even older than the Fortin’s ’29 GMC was a beautifully restored and running 1919 Ford Model TT owned by Mike Fox of Foxboro, Ontario. We were unable to track down Mr. Fox to learn more about the truck, but it certainly caught people’s attention. The truck’s metal and wood exterior would have originally been painted black.

Another rarity present in Athens on the weekend was Keith Jones’ 1937 J-30 Studebaker. Jones owns and operates Abilene Motor Express as well as the Keystone Truck & Trailer Museum in Colonial Heights, Virginia. The J-30 was one of the larger Studebaker truck built and remains a very rare piece today. It features a set of the original 10-stud Budd wheels and Martin fifth wheel, one of the first rocking fifth wheels used in trucking. That idea was patented in 1916 and was intended to buffer the trailer against sudden starts and stops. The truck has a 6-cylinder flat-head Hercules gasoline engine.

Also on display were about 30 trucks from Clarlie Tackaberry’s collection, said to now be in excess of 240 trucks in total. Tackaberry says he was happy with the turnout, both of trucks and visitors and says he will be hosting another event next summer.

“The Athens Fairgrounds is a great place for a show like this and people are telling me they would love to come back again next year,” Tackaberry says. “Until now, this show has been held in Kingston, but we were outgrowing that space. We have lots of room here so it looks like we’ll be back next summer.”

The Athens Truck Show was hosted and sponsored by the Upper Canada Chapter of the Antique Truck Club of America.