DAWSON CREEK, B.C. – The response this past weekend in Dawson Creek, B.C., in support of the 18 Wheels of Christmas campaign was amazing.

That’s according to Chris Richards of Rosenau Transport, who organizes the yearly Christmas charitable event in the area. Richards said this year they were contacted by more agencies and groups looking for their assistance, so the campaign “stepped things up a few notches.”

Normally, 18 Wheels uses a single trailer and runs its event over a weekend with the goal of supporting one of the local food banks. But this year, with three food banks in Dawson Creek, the organization decided to up its game to three trailers, each in their own location and supporting each food bank.

“In total, with the help of dozens of community volunteers, we collected 63 pallets of food and over $4,300 in cash and corporate donations,” said Richards. “This is well over double our usual collection efforts from previous years.”

With a population of just over 12,000, Richards was overwhelmed by the generosity of his community, saying they “gave like a city of a million.”

“I cannot thank all of our volunteers enough,” he said, highlighting the assistance they received from the local Rotary Clubs, Air Cadets, as well as his colleague from Rosenau, Karen Brisebois. “The efforts put forth by everyone will ensure that our community will not need to go without this holiday season and beyond.”

The efforts of 18 Wheels was equally successful in Alberta, with events so far being held in Okotoks Nov. 15 and Calgary this past weekend.

It was the campaign’s 10th year at Okotoks Light Up, and with weather cooperating, donations flooded in more than expected.

On Nov. 23, 18 Wheels was in Calgary at the Lake Bonavista Promenade, where the community has helped the cause since 2002.

“We are never disappointed with the involvement of the businesses and residents of this community,” said Nickel. “We gathered 12 full food bank collection boxes and will be delivering this to the Calgary Food Bank on Dec. 23.”

The campaign still has its weekend blitz Dec. 6-8, when 18 Wheels can be found at all seven Save-on-Foods stores in Calgary. All donations collected at that time will also be delivered to the Calgary Food Bank Dec. 23. 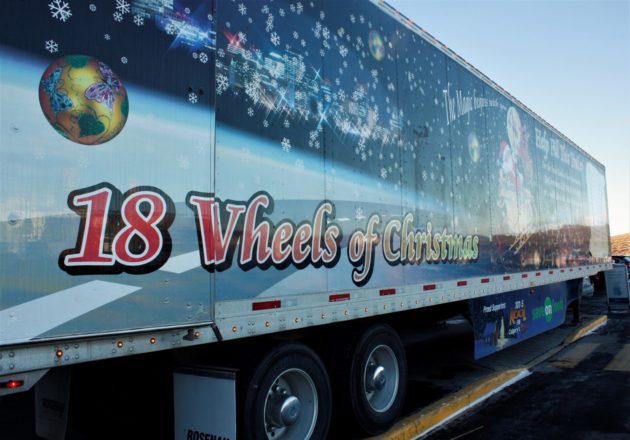