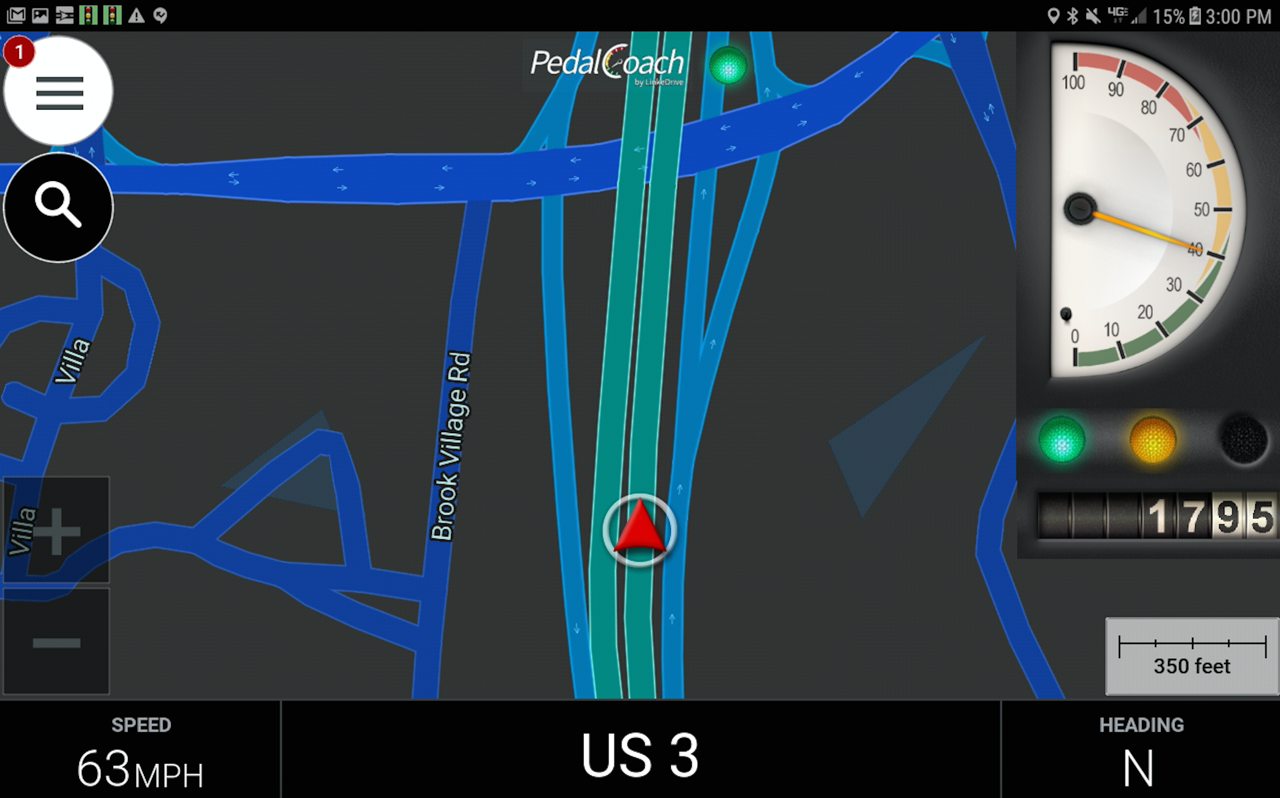 PedalCoach’s gauge display represents fuel consumed at a given moment. The more time the driver spends in the green zone, the better his fuel economy will be.

TORONTO, Ont. — How do you coax drivers to operate more fuel efficiently? Is it enough to encourage them to reduce idling or use progressive shifting techniques? If not encouragement, then how about coercion using idle-shutdown timers, speed governors, or engine-rpm limiters? Such devices effectively take away control from the driver — and drivers hate them. Paying fuel bonuses can be a one-way ticket to a toxic workplace depending on how they’re managed. Drivers respond well to incentives when they are seen as fair, but it’s almost impossible to manage a fuel incentive program based solely on fuel consumed.

Drivers will argue, rightly, that there are too many variables at play to compare even two identical trucks on identical routes. Factors such as traffic density, weather, schedules and even tire tread depth come into play. Fleets that have tried such programs can give up in frustration, and drivers come away feeling the fleet is pitting driver against driver on a very unlevel playing field.

But what if drivers were rewarded for driving the truck properly, coaxing every last meter out of a liter of fuel rather using an mpg-based bonus system?

“What’s 7 mpg anyway?” asks Jeff Baer, founder and CEO of LinkeDrive, developer of the PedalCoach in-cab coaching application. “Without some context, the mpg gauge doesn’t know if 7 mpg is good or bad. Would you bonus a driver that gets 7 mpg with a load of ping pong balls? How about a load of bricks?”

PedalCoach is an in-cab application that provides drivers with visual cues to help them drive more efficiently by constantly calculating the optimal fuel rate at a given moment. It gives drivers a moving consumption target that doesn’t penalize them for heavy loads, old trucks, headwinds, or traffic density. It simply encourages proper operation of the truck.

Isaac Instruments takes a similar approach with its Isaac Coach application, bundled into its fleet management devices. It uses visual indicators to coach drivers on proper throttle management and gear selection while providing a performance-based scorecard for realistic comparison of the drivers’ eco-driving skills.

“When fleets monitor fuel economy, they tend to group drivers in similar operations for easier comparison: U.S., heavy-haul, city, etc.,” says Isaac Instrument’s vice president of marketing Jean-Sebastien Bouchard. “Isaac Coach takes the actual fuel mileage out of the equation, and instead monitors how efficiently the driver operates the truck. You could score any two drivers in the world accurately and fairly.”

The True Fuel application from Vnomics takes a similar approach, but uses an audible alert to warn drivers when they are straying outside the envelope. Using algorithms developed in-house, True Fuel calculates the maximum potential fuel economy at a moment in time and compares it precisely to the actual fuel consumed. If the driver is operating correctly, nothing happens. If drivers accelerate too hard, take engine revs too high, or exceed a set speed limit, they hear the beep of an alert.

“We feel that feedback in the cab should be exception-based and audible rather than visual for safety reasons,” says Vnomics’ chief technology officer Lloyd Palum. “True Fuel is a low-drag, easy-to-understand tool that gives drivers the ability master fuel-efficient driving for themselves.”

While these tools might deliver their messages in slightly different ways, they share several things in common. They all tap into the truck’s data port and draw fuel consumption numbers and vehicle parameters directly from the ECM; they provide drivers with indications of how well they are driving, to encourage better performance rather than taking something away; and they provide feedback and score drivers based on technique, independent of actual fuel consumption.

“PedalCoach is as much a driver engagement tool as it is a fuel-saving device,” says Baer. “We don’t make assumptions on the amount of fuel used, just that the driver is using the minimum amount of fuel possible to maintain speed. For every mile drivers keeps the gauge in the green, they get a point. When the trip is over, the number of points over miles is the PedalCoach score. It really just indicates how hard the driver is trying to conserve fuel regardless of what they have to work with.”

What the truck driver sees

Who hasn’t heard of the old piano teacher who would rap students’ knuckles with a ruler for improper technique? That’s no way to teach a new skill. Fortunately, apps like Isaac Coach, True Fuel, and Pedal Coach are kinder, gentler, and way more effective than a figurative rap on the knuckles.

True Fuel, on the surface, has the least intrusive interface. The black box connected to the data port can be hidden anywhere. The driver sees nothing, but hears a tone only when he or she is exceeding some parameter. At the end of each leg of the trip, whenever the key is turned off, the system announces the driver’s score. A score of 100 would be perfect. Such near-immediate feedback for the driver is a better coaching tool than sitting down with a supervisor a week or two after the fact to review reports, says Palum. By that time, the driver will have forgotten the incident, and it will be of no value as a teaching tool.

“There are two prongs to what we do for a teaching experience,” Palum says. “The first is the audible feedback at the moment in time you’re doing something inefficient. The other is a ‘game-film’ approach where the driver can review a previous run and get detailed information about the truck he or she was driving, where the waste was sneaking in, and under what conditions.”

A visual report shows actual fuel economy for a trip as well as potential fuel economy — an estimated number based on sticking with best operating practices — as well as a “gallons lost” field. This shows how much fuel was wasted. In addition to an overall 0-100 driver score, a gear shift display shows truck and engine speed as well as gear choices, and the time at certain engine speeds in certain gears. This is a clear reminder of whether drivers are using progressive shifting.

The Isaac Coach interface is visual. On a tablet screen, the driver sees three green or yellow circles. Data on the truck’s weight, speed, and terrain come from the ECM, while the algorithm calculates potential fuel savings compared to actual fuel used based on inputs like which gear the truck is in, and the percentage of the throttle pedal input.

Three green circles indicate more throttle can be safely applied. Three yellow circles means the driver is close to the throttle input limit. If the word “accel” appears, the driver has exceeded the throttle input and should back off a little. If the driver removes his or her foot from the pedal and coasts, the word “coast” appears in the display, and this earns extra points toward the Isaac Score. The word “shift” appears when the driver exceeds a certain rpm in a certain gear, or when traveling faster than 90 km/h when not in top gear.

“Even if all the fleet’s trucks are doing different operations — city, highway, heavy or lightly loaded — they are all scored the same way with Isaac Coach,” says Bouchard. “It’s not the actual fuel consumption that matters, it’s how well the driver operated the trucks by following the prompts on the tablet. The fuel economy follows when the driver is driving properly.”

With PedalCoach, the driver interface is more visually oriented, displaying what looks like a speedometer with numbers from 0 to 100. The gauge is shaded green (0-45), yellow (25-75) and red (65-100). Essentially, it displays the relationship between the fuel going into the engine, the vehicle speed coming out, and the rate of change between those two signals. “We’re also looking at pedal position and what they are doing with the brakes and everything else,” says Baer. “It’s very simple for the driver. All they have to do is keep it in the green and they are operating in the most economical range of the engine under a certain set of conditions, uphill, into a headwind, or on flat ground.”

If the driver encounters a hill or a sudden change in wind direction, trying to maintain the same speed will require more throttle. So as he or she steps on the pedal, the gauge creeps upward toward 100. Staying in the green might require giving up a bit of road speed to maintain efficiency.

At the end of each day the driver is emailed a daily summary report called MyDrive, showing details from the trip including miles driven (at highway speed and in the city), weather conditions along with wind direction and speed at various points along the route, and a few other useful summaries. “Drivers get instant feedback from the gauge display and report from which they can learn from the day’s driving,” Baer says.

All of these tools work equally well with automated transmissions, by the way. More emphasis is placed on throttle use, such as sudden acceleration; choice of performance, economy or manual mode; as well as throttle position and speed control. But the basic concept of managing throttle and road speed still apply.

“Use of these tools lines up with how the fleet is already doing in terms of a culture of performance and cooperation with its drivers,” says Palum. “If the fleet feels that it doesn’t have a constructive relationship with its driver pool, then introducing something like this, where there’s already a lack of trust, can be counterproductive. The fleets that do the best are those that have a culture of trust.”

Palum went on to describe a such a fleet, where the drivers are saying, ‘Hey, please give us another decimal point in the score so we can break a tie.’

“They have moved beyond the bickering and mistrust and they are really trying to master driving for efficiency,” says Palum. “We work with the customers to help build that sort of culture. It’s the carrot versus stick approach. Coaxing and coaching versus coercion.”